It’s no secret why drug users come to George Patterson in a mall parking lot just outside Phoenix to get their clean needles, syringes and other supplies on Tuesday afternoons, instead of heading to the pharmacy down the street.

“It’s really low-barrier the way we are doing it,” Patterson said. “All you have to do is find us.”

Patterson asks for no IDs, no signatures and no questions — all of which might dissuade IV drug users from seeking out clean needles or the overdose reversal drug naloxone, Patterson said. He’s among the volunteers who run Central Arizona’s only syringe exchange program; it’s called Shot in the Dark.

“A lot of [the drug users he sees] have trust issues — understandably — with the health care industry, with what’s going to be put on their record,” Patterson said, as he handed out the medical supplies from the trunk of his car.

While many states have syringe exchanges, only some have laws that explicitly permit syringe exchanges — and Arizona isn’t one of them. Shot in the Dark operates quietly, without public funding. The group sets up in different corners of the Phoenix metro area for a few hours at a time, Patterson said, and struggles to keep up with demand.

“There are still a lot of people that don’t know even know about it,” said one man who uses the service. “It shouldn’t be so hidden.” Kaiser Health News and NPR agreed not to use his name because his drug use is illegal.

States across the U.S. are pouring resources into fighting the opioid epidemic. According to state data from 2016, an average of two people died every day in Arizona from opioid-related overdoses. Deaths due to heroin more than tripled from 2012 to 2016.

“It’s a problem that knows no bounds,” Arizona’s Republican governor, Doug Ducey, said in January during his State of the State address. “It affects men and women, young and old, rich and poor.”

Ducey has declared the opioid epidemic a public health emergency — a move that a handful of other states have made, too. In Arizona, the designation allowed public health officials to begin tracking overdose data in real time and set in motion a multiagency effort to combat the epidemic. 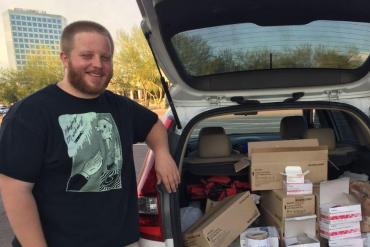 George Patterson is one of the volunteers who run Phoenix’s only syringe exchange program, a mobile program called Shot in the Dark. (Will Stone/KJZZ)

But some public health advocates, including Patterson, see the governor’s declaration not necessarily translating into more help for people on the street using drugs.

“Instead of focusing on ways that you can connect with the IV-drug-using population — show them that their health matters, and prevent all the people who are likely never going to stop using IV drugs,” Patterson said, “they, like, leave them out here to pick up dirty needles out of parks and give themselves diseases.”

Needle exchanges are based on a concept known as harm reduction — they seek to reduce the negative consequences of drug use without forcing abstinence. The U.S. Surgeon General has determined such programs don’t promote drug use and do improve health outcomes, including lower HIV rates.

But that hasn’t convinced some of Arizona’s most influential law enforcement figures.

“It’s a well-intentioned, misguided program,” Maricopa County Attorney Bill Montgomery said. “We don’t have a free-case-of-beer-a-month program for alcoholics. It sends the wrong message — and it’s not providing the treatment.”

This is a common argument against syringe exchange programs — that they enable drug use. Proponents of harm reduction, however, point to research showing that people who use these programs are actually more likely than others to seek treatment.

Despite his lack of faith in needle exchange programs, Montgomery said he is sympathetic to people who are addicted to opioids — he is not out to prosecute drug users when he doesn’t have to.

“Law enforcement really does look at ‘treatment first’ as an option for those who are addicted,” Montgomery said. He pointed to a pretrial diversion program that is expanding statewide, and the Arizona Angel Initiative, which lets drug users turn to the police and opt for treatment.

Expanding those kinds of programs is part of the state’s wide-ranging Opioid Action Plan, which treatment specialists helped craft.

Arizona’s 100-page policy road map recommends improving access to treatment and naloxone, as well as enacting a Good Samaritan law that gives immunity to those who call 911 to report an overdose.

But the plan also proposes more regulation of doctors and their prescribing practices, including a five-day limit on initial opioid prescriptions for patients who are taking the drug for the first time.

That kind of focus on prescribers is “misguided,” said Dr. Jeffrey Singer, an Arizona surgeon, and senior fellow at the libertarian Cato Institute.

“Our policies right now are aimed at the supply side,” Singer said. “And all they are doing is driving the death rate up. They’re not driving use down.”

Opioid users are increasingly turning to heroin and fentanyl, Singer said. He points to research that shows the rate of opioid prescriptions has fallen in recent years while the deaths associated with illicit drugs continue to rise.

Singer believes even labeling the state’s opioid crisis as a public health emergency could backfire.

“That tends to create a sense of panic,” Singer said. “History has shown us every time we have a panic, we end up passing laws and doing things in haste that are not well thought out.”

Singer thinks Arizona should embrace harm reduction strategies like syringe exchanges, instead of tamping down prescribing.

“My job is to save lives and to ease suffering,” Singer said. “The law enforcement people need to have that same attitude. We’ve got to take personal biases out of it and just focus on the goal, which is less death and less disease.”

Earlier this year, the Arizona Department of Health Services asked a group of treatment providers who were working on the state’s action plan for their top recommendations. Legalizing syringe exchanges was one of the group’s priorities, according to interviews and draft documents obtained by KJZZ News.

But that priority didn’t make the final version of the plan; only a broad reference to using “harm reduction strategies” survived.

A spokesperson for the department said the recommendation was omitted because it “doesn’t directly reduce opioid-related overdoses or deaths.”