Nearly 22,000 poor kids in Arizona will gain health insurance coverage under a Medicaid deal the state has reached with the Obama administration, federal officials said Friday. 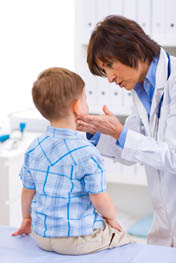 The agreement lets Arizona use a combination of county dollars, money from the University of Arizona Health System and a small amount of state money gained from Indian gaming operations to draw down federal matching dollars. These funds will be used to set up the new insurance coverage program and pay extra Medicaid dollars to hospitals that treat a high proportion of uninsured patients.

Arizona is the only state whose Children’s Health Insurance Program (CHIP) has been closed to new members. CHIP is a state-federal health insurance program for children whose parents make too much money to qualify for Medicaid. Arizona froze enrollment in the program in 2009 and more than 120,000 children have been put on a waiting list for coverage.  Since March 2010, states have been prohibited from cutting Medicaid and CHIP coverage as a result of the federal health overhaul.

The new “KidsCare II” program would help children who don’t qualify for Medicaid but whose parents make less than 175 percent of the federal poverty level, which is $33,408  for a family of three and $40,338 for a family of four. Coverage begins May 1 and will end Jan. 1, 2014, when key provisions of the health law kick in.

KidsCare II is open only to children currently on the waiting list for CHIP and those currently enrolled in Medicaid who will “age out” of that program in coming months.

“This is great news,” said Jocelyn Guyer, deputy executive director at the Center for Children and Families at Georgetown University. “While it isn’t a full restoration of Arizona’s CHIP program, it is an important step in the right direction.”

Cindy Mann, deputy administrator of the Centers for Medicaid and Medicare Services, praised the deal, which has been in the works since last fall. “With these changes, Arizona and CMS are helping vulnerable populations receive the care they need,” Mann said. “This new authority will allow the state to initiate a new health care coverage initiative, expected to benefit 22,000 children, provide federal support for uncompensated care costs incurred by hospitals, and offer uncompensated care payments to Indian Health Service and tribal facilities.”

Arizona hospitals earlier this week dropped a lawsuit against the state for imposing a 5 percent Medicaid rate cut. Some of the biggest safety net hospitals in the state will gain extra Medicaid funding under the new agreement.

Arizona Gets OK To Expand Health Coverage To Kids