ALEXANDER, Ark. – Ellen Louise Fant was no fan of the Affordable Care Act.

“I don’t like to have anything shoved down my throat,” said Fant, 60, referring to the law’s requirement that most Americans carry health insurance. 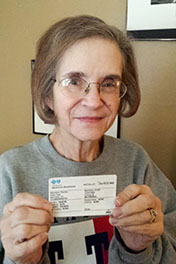 Ellen Louise Fant, 60, of Alexander, Ark., signed up for Medicaid in January under the state’s private option (Photo by Phil Galewitz/KHN).

Then last fall, the former teacher’s aide got a letter from the state of Arkansas telling her that since she gets food stamps, she qualified for Medicaid, the health insurance program for the poor, which is being expanded under the health law to cover those who make less than 138 percent of the federal poverty level, or up to $15,900 for an individual.

She signed a form, got back an insurance card Jan. 10 and days later, underwent the knee replacement surgery that she had needed for years but couldn’t afford.

Fant is one of more than 80,000 Arkansans who’ve gained Medicaid coverage under the heath law this year through a unique financing arrangement designed to win over Republicans who oppose expanding a government-run program they say doesn’t work.

The Arkansas’ experiment, known as the “private option” marks the first large-scale attempt to enroll Medicaid recipients into the same private health insurance plans that any consumer might buy in the health law’s online insurance marketplace. That’s different from how Medicaid typically works where enrollees must join state-operated programs or private managed care plans designed exclusively for the poor — and which pay doctors less, sometimes a lot less. As a result, private option enrollees like Fant will have access to a larger network of doctors and hospitals than is usually available through Medicaid.

The approach also offers GOP lawmakers a politically palatable way to implement a key provision of Obamacare. It has already been adopted on a smaller scale in Iowa and is gaining interest from governors and lawmakers in several Republican-led states including New Hampshire, Florida, Utah and Pennsylvania.

“In crafting the ‘private option,’ Arkansas has provided a pathway for other states,” said Deborah Bachrach, a partner with consulting firm Manatt Health. “They are truly trailblazers.”

Nonetheless, Arkansas’ experiment could end June 30 unless its Republican controlled legislature — which reconvenes Monday — renews its support. And that is looking increasingly uncertain. Last month’s election of a Republican state senator who opposes the deal and the about-face of another GOP senator may have tipped the political balance.

“If we lose one or two votes, it’s critical,” Gov. Mike Beebe, a Democrat, said in an interview, citing a state rule requiring that 75 percent of the members of both houses pass appropriations measures.

A decision to halt the program in Arkansas could leave as many as 200,000 people who are believed eligible for the program without coverage and have a chilling effect on other states weighing similar efforts.

Since the U.S. Supreme Court made this provision of the law optional for states, 25 — most of them Democrat-controlled — have expanded Medicaid.

Arkansas’ model was crafted by Republican lawmakers who said they opposed the health law, but were concerned that not expanding Medicaid would hurt the state’s hospitals and businesses. 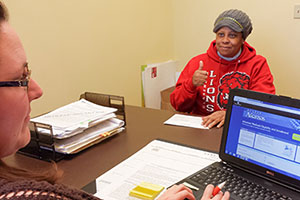 Rosarita Lott, right, enrolls in the Medicaid private option with the help of outreach worker Susan Caplener at the Mid-Delta Health Systems, a community health center in Clarendon, Ark. (Photo by Phil Galewitz/KHN).

Unlike past Medicaid privatization efforts, which moved people into managed care plans that enroll only the poor, Arkansas allows the newly eligible  to sign up for the same plans available to any consumer in the health law’s marketplace. The idea is that private plans will use Medicaid benefits more efficiently.

Beebe, a Democrat in his second term, became a big supporter, saying the plan would help save state taxpayers nearly $90 million this year, primarily from reduced uncompensated care costs. The federal government is paying the bill for the expanded program through 2016, after which states pick up some costs but never more than 10 percent.

The Obama administration approved the Arkansas plan with two major conditions: that recipients’ benefits and cost-sharing remain the same as in the public program and that total costs are no more than if the state had expanded traditional Medicaid.

Some experts are not convinced they can meet the cost test because the government will have to cover the higher fees that private plans pay doctors and hospitals.

“Whether this will be cost-effective is an open question,” said Joan Alker at the Georgetown University Health Policy Institute.

But federal health officials say their assessment will be more than a “math equation” because they also have to look at whether people get better care.

“In Arkansas the state is seeking to combine all the good aspects of both commercial insurance and Medicaid coverage” said Cindy Mann who oversees Medicaid for the Centers for Medicare & Medicaid Services.

Arkansas officials believe any cost difference will be minimal because they would have had to increase payment rates to providers to entice more to participate in the traditional Medicaid program. They also hope to show that enrollees in private plans have better access to care and better outcomes.

“If we are right…this is potentially a game changer nationally,” said state Sen. David Sanders, a Republican who helped craft the plan.

The impact of expanding Medicaid is expected to be huge in this poor state where one in five people younger than 65 is uninsured. Until January, Arkansas had the second most restrictive Medicaid program in the nation, after Alabama. Single adults were ineligible and parents of dependent children could qualify only if their incomes were below 17 percent of the federal poverty level.

Despite the roiling politics in Little Rock, most Arkansas stakeholders are enthusiastic.

Doctors and hospitals like the plan because private insurers pay them more than Medicaid. Consumer advocates believe enrollees will have greater access to care because more doctors participate in private insurance. Insurers have embraced it because they would get premiums from many new members.

Officials running the health law’s marketplace see benefits because the larger group of enrollees buying private plans could entice new insurers to participate and improve the risk pool since many are young adults.  One new insurer, Centene, already came in this year.

The private option also eliminates a problem known as churning, when people’s incomes change and they lose their Medicaid coverage and have to change insurers and often doctors. Under Arkansas’ model, people stay with same health plan whether their income goes up or down.

Some conservatives, however, are still fighting the effort, noting the Medicaid expansion is part of a health law they say means bigger government.

State Sen. John Cooper, the Tea Party Republican who won the special election last month, argued on the campaign trail that the private option won’t save Arkansas money in the long term.

Lawmakers are also hearing complaints from medical specialists, angry that Blue Cross, the dominant insurer, announced in November it was cutting reimbursement rates by 15 percent to those participating in plans sold through the health law marketplace.

But the view from those newly enrolled in health care is positive.

For Fant, the private option model means “peace of mind” because she can get the same care as those with higher incomes.

“While I personally do not like Obama … I say, ‘thank you for doing this for me,’” she said, showing her insurance card from Blue Cross and Blue Shield of Arkansas.

When told the legislature could end her newfound coverage July 1, her jaw dropped. “That would be very upsetting,” she said. “At least I had my knee done.”