On Monday, Arkansas will kick off a program to reduce its Medicaid costs and improve care through a partnership with its largest private insurance companies — Arkansas Blue Cross Blue Shield and QualChoice. If successful, experts say the state’s Medicaid program could save about $4.4 million in FY 2013 and $9.3 million in 2014. 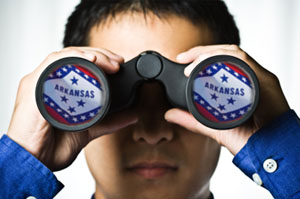 The Health Care Payment Improvement Initiative is a shared-savings plan that begins to move the state and private insurance market away from a traditional fee-for-service payment system, to one in which providers are paid based on how well they deliver care and manage their costs. But it isn’t a move toward managed-care, either. Instead, it’s taking the health care delivery system that is already in place and adding new incentives and accountability.

This concept, one of the first of its kind — especially on this scale — got the Centers for Medicare and Medicaid Services‘ go-ahead earlier this month.

In a state with one of the nation’s highest poverty rates and where 26 percent of residents are enrolled in Medicaid, the initiative is timely, according to John M. Selig, director of the state’s Department of Health and Human Services. Arkansas’ Medicaid budget faces up to a $400 million shortfall in the next fiscal year, as well as the possibility that 250,000 more people could be added to the program in 2014 should the state legislature opt to participate in the health law’s Medicaid expansion. “We’ll have a better program to expand,” he said.

Steven A. Spaulding, the vice president of enterprise networks for Arkansas Blue Cross Blue Shield, said that expensive insurance premium rates have fueled increases in the number of people either without insurance or struggling to afford it.

The collaboration between the private insurance companies and Medicaid started as a means to address these issues. “We began to understand that we had more things in common than we thought and it became a conversation about creating consistency in payment and expectations for the delivery system in Arkansas,” he said.

First, the three entities analyzed historical billing data to determine the state’s highest-volume and most costly medical conditions. Then, they each individually targeted three conditions for which they would track the costs for “episodes of care” — meaning the total charges of treating patients for that specific illness, everything from office visits, to medications and specialty care. The conditions included perinatal care, upper respiratory infections, attention deficit/hyperactivity disorder, hip and knee replacements, and congestive heart failure.

Each of the plans then determined average costs for these treatment “episodes,” and created categories — “commendable,” “acceptable” and “exceeding the acceptable threshold.” These classifications will be used to track which physicians are reaching the quality and cost targets.

The state sent out 1,357 cost reports in July to Medicaid providers detailing the previous year’s averages for each of the conditions. The private plans sent similar, but fewer, reports to their doctors.

As of Oct. 1, doctors deemed principal accountable providers — or “quarterbacks” as Selig refers to them — will get bonus payments if their episode-of-care costs fall within the “commendable” range. That means their costs were lower than the thresholds established by the three insurance providers. It’s the carrot of a carrot-and-stick approach. The stick? Their participation is not voluntary. It’s required for all providers who participate in Medicaid or the two insurance plans, and treat patients with these conditions.

Providers will receive quarterly reports tracking their spending in relation to the average. Those who fall in the “acceptable” range will be reimbursed as usual. Both Selig and Spaulding expect most practitioners to hit the average.

For those who exceed Medicaid’s acceptable cost range, the state will withhold part of the provider’s reimbursement check. The private plans will follow a similar approach, according to Spaulding.

To introduce this program, Medicaid and the two private plans met with physicians and provider groups across the state. Initially, the providers were concerned that such a shared-savings program would either lead to medical rationing or a once-size-fits-all approach.

“[Rationing of care] came up at nearly every meeting,” said David Wroten, the executive vice president of the Arkansas Medical Society.

But ultimately, most found the program had built-in “flexibility” — allowing them to treat patients well while still being mindful of costs. “We’re not trying to get between the doctor and any specific patient. With each case [the provider] needs to do what they think is best, and we know there is going to be a lot of variation,” said Selig.

So far, the response has been positive. Selig said that providers have told him they never had the data before to compare the costs of x-rays, implants or the other services that make up a patient’s treatment and that information has led doctors to communicate with hospitals, nursing homes, pharmacists and others.

“It’s actually been very gratifying,” Selig said. “We’ve had providers call us and say, ‘Can you tell me what these other services cost that I’ve been ordering because I’ve never really worried about that.’ Now they are seeing their reports and some of them are saying, ‘I actually want to understand these costs and if I can manage those costs better and still provide good care, I’m happy to do that.'”

By collaborating with the private plans, Medicaid is able to accomplish changes on a scale it may not have been able to do alone, said Selig. The goal, he added, is not to set prices. Instead, he said, “we are all just trying to give consistent signals to the providers,” so they can monitor their spending.

“It’s a work in progress,” Governor Mike Beebe told Stateline news service. “It could be that we need to tweak it and make changes as we see the need. We don’t in any way want to direct doctors or hurt their ability to deliver quality care.” But doing nothing, he says, is not an option.

Spaulding said the regular cost reports will give Arkansas’ payment system transparency. “We think that over time we are going to create a bend in the trend,” he said. “A good number of providers will share savings without making much of a change at all,” but he also doesn’t expect his company will be doling out an overwhelming number of bonus payments.

And from a national perspective, the initiative could change the health system’s incentives, explained Matt Salo, executive director of the National Association of Medicaid Directors. “A lot of other states are looking to Arkansas to see how this turns out.”