Sen. Tim Scott, a rising star in the Republican Party with broad popularity in his home state of South Carolina, is getting showered with drug industry money before facing voters this fall.

This story also ran on The Post and Courier. It can be republished for free. 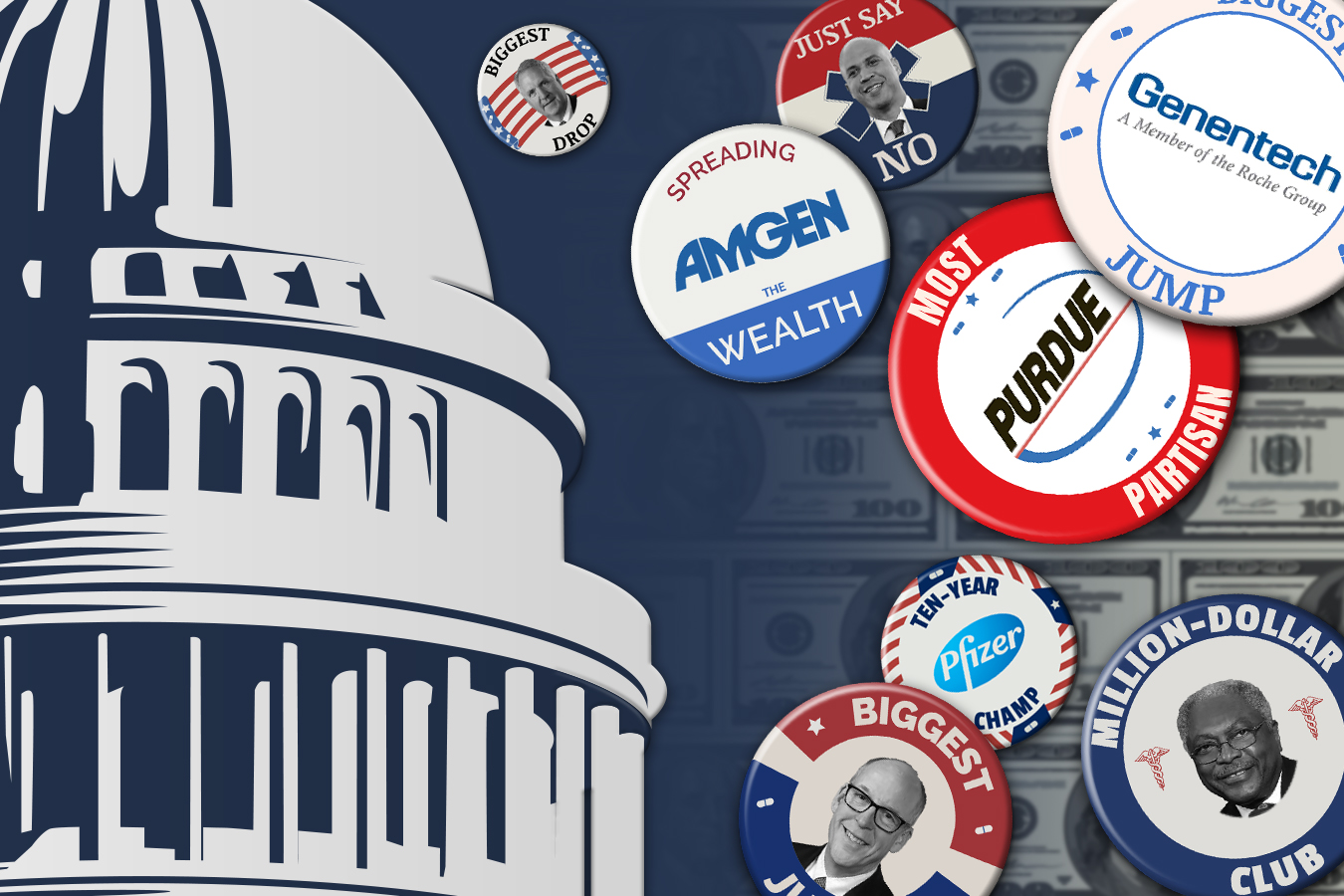 Scott was the top recipient of pharma campaign cash in Congress during the second half of 2021, receiving $99,000, KHN’s Pharma Cash to Congress database shows, emerging as a new favorite of the industry. Though Scott has been a perennial recipient since arriving in Congress in 2011, the latest amount is nearly twice as much as his previous highest haul.

Why Tim Scott? South Carolina’s junior senator is someone widely viewed as destined for greater things during his political career. And this is an existential moment for the American pharmaceutical industry when securing allies is critical.

Congress is under intense pressure to rein in the high prices of medicines in the U.S., which are often several times those in other developed countries. Roughly 1 in 4 adults report difficulty affording their prescription drugs, according to KFF polling. Further, 83% of Americans support the idea of Medicare negotiating with pharmaceutical firms to lower prices for both its beneficiaries as well those with private insurance — that’s 95% of Democrats, 82% of independents, and 71% of Republicans.

The industry needs people like Scott, who has introduced several health-related bills in recent years and maintains drug industry-friendly positions, in its corner. He opposes proposals introduced in legislation backed by most Democrats in Congress to let Medicare negotiate prices. In 2019, when the Senate Finance Committee considered a drug pricing bill crafted by Sen. Chuck Grassley (R-Iowa) and Sen. Ron Wyden (D-Ore.), Scott voted against a measure that would have amended the legislation to allow Medicare drug price negotiation. (Scott himself was absent but registered his opposition through a proxy vote.)

In September, as the top Republican on the Senate’s Special Committee on Aging, he released a report arguing that HR 3, a sweeping measure from House Democrats to tamp down prices, would result in “shattered innovation” and “bankrupt businesses,” echoing arguments made by pharma companies.

“Democrats propose the federal government should be in charge of deciding the price of treatments, instead of a competitive free marketplace sustained by companies driving innovation,” the report stated. The bill would have allowed the federal government to negotiate prices for certain costly medicines and penalize drug companies that don’t cooperate, among other provisions.

Scott has also been a member of the Senate Finance Committee since 2015, an assignment that gives him significant influence over legislation affecting the sector as well as a prominent perch for fundraising. In total, 27 drug and biotech companies or their powerful lobbying organizations in Washington contributed to his campaign accounts in the latter half of last year. Amgen, Vertex Pharmaceuticals, Merck & Co., AstraZeneca, BioMarin Pharmaceutical, and Genentech were his top donors, each giving between $5,000 and $10,500.

He also is a member of the Senate Health, Education, Labor, and Pensions Committee, which this year is set to consider an issue of great importance to pharma companies: reauthorization of user fees the industry pays to the FDA to help expedite the drug review and approval process. The law must be reauthorized by Congress every five years.

“I didn’t know until you told me,” Scott said when stopped by a KHN reporter in the Capitol and asked what the message was to his constituents as the member of Congress who has received the most money from pharmaceutical PACs in the last two quarters of 2021.

Stephen Billet, an expert on political action committees and associate professor at the Graduate School of Political Management at George Washington University, points to factors beyond his stances on pharma issues that contribute to his fundraising haul. Many of Scott’s positions are aligned with his fellow Republicans in Congress who shun greater government intervention in controlling costs. Instead, the contributions may reflect the industry’s bet that Scott has a promising political future.

He is a prolific fundraiser. Federal Election Commission records show that Scott has raised $38 million — the most of any GOP senator up for reelection in 2022 and the second highest among senators across both parties — and had $21.5 million in his campaign account at the end of 2021, fueling speculation about a future presidential run. “America, A Redemption Story,” Scott’s memoirs, is scheduled for release in August through Christian publisher Thomas Nelson.

Billet said pharmaceutical PACs will sit down at the beginning of a campaign cycle and take a close look at the upcoming races and what their budget is likely to be and then figure out who they want to help.

“So they’ll say, Tim Scott is up, he’s an up-and-comer, he’s been a pretty good guy,” Billet said. “It’s a good idea to get out front and put some money in his pocket.”

Pharmaceutical firms have a long tradition of strategic gift-giving to members to develop goodwill, the benefits of which typically emerge many years later.

Other Republican senators up for reelection didn’t get nearly as much money from drug companies during the same period, KHN’s analysis of Federal Election Commission data shows. For example, Sen. Michael Crapo (R-Idaho), the most senior Republican on the Senate Finance Committee, received $68,300. Fellow Finance panel member Sen. Todd Young (R-Ind.) took in $48,000. All three seats are considered safe for Republicans in November.

Scott has received money from drugmakers every year since coming to Congress as a member of the House in 2011, receiving $596,000 through the end of last year, according to the KHN analysis of FEC data. Scott joined the Senate in 2013 after then-Gov. Nikki Haley chose him to replace GOP senator Jim DeMint, who resigned from Congress to helm the conservative Heritage Foundation think tank. But this is his banner year; previously, the most he received was $54,000 during the second half of 2019.

The following year, Scott co-founded the congressional Personalized Medicine Caucus with a handful of other lawmakers, including fellow pharma darling Sen. Kyrsten Sinema (D-Ariz.). Personalized medicine — which is also referred to as precision medicine — promises to use genetics and other traits to develop individualized treatments for patients, often at a very steep price.

“We will take steps to nurture scientific advancements that may reverse the genetic and molecular causes of rare and common diseases, bringing new hope to American patients and lasting benefits to our health care system,” Scott’s prepared statement read at the time.

Scott’s press secretary, Caroline Anderegg, shared that the senator has long held an interest in sickle cell disease, which is the most commonly inherited blood disorder in the U.S. and disproportionately strikes Black people. The disease, which affects roughly 100,000 Americans, is one that could benefit from the development of gene-based therapies, a form of precision medicine, she said.

The caucus’s formation was hailed by the Personalized Medicine Coalition, a pharma-friendly group whose members consist of drugmakers donating to Scott — AbbVie, AstraZeneca, Eli Lilly, Genentech, Johnson & Johnson, and Merck, to name a few. The organization estimated that personalized medicines accounted for more than a quarter of new therapies the FDA had approved since 2015, underscoring the pharmaceutical industry’s widespread work in the field.

Since 2019, Scott has introduced 17 health-related bills or resolutions about everything from food allergens and sickle cell disease to health disparities among racial and ethnic minorities. Last year, he sponsored a bill that would create tax incentives for drug and medical device companies to manufacture more of their products in the U.S. The legislation’s framework loosely aligns with ideas from the Association for Accessible Medicines, which lobbies for generic drug companies.

Overall, from June to December, members of Congress received $3.5 million in their campaign coffers from pharmaceutical companies and their trade associations, according to the KHN analysis of industry contributions.

“There is kind of a cycle to giving and so the off year, 2021, is likely going to have less money than 2022, since it’s an election year,” said Paul Jorgensen, an associate professor at the University of Texas-Rio Grande Valley who studies campaign finance. “But there was a lot of money put into lobbying this cycle because of all of the initiatives that were being pushed in the House and with the Build Back Better plan, so in some ways your numbers just kind of mirror what one would expect.”

Other top recipients of drug industry money in the second half of 2021 include Rep. Cathy McMorris Rodgers (R-Wash.), who was second behind Scott in contributions, receiving $97,300. McMorris Rodgers is the top Republican on the House Energy & Commerce Committee, which has significant sway over pharmaceutical issues, and could become chair of the powerful panel should Republicans retake the House majority in November as expected. Over the entirety of 2021, she received the most money from the sector of any lawmaker.

The pharmaceutical PACs are cognizant of who is up for committee leadership roles, said Billet: “They are 100% aware of who the next person in line is, making McMorris Rodgers an obviously easy target.”

Sinema posted the third-highest haul — $74,800 despite not being up for reelection until 2024. It was a big gain over the first half of 2021, when she received $8,000. KHN reported in 2020 on Sinema’s connections to the pharmaceutical industry.