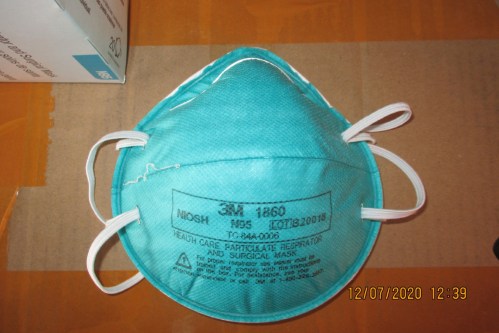 A key U.S. senator is calling on the Federal Trade Commission to investigate N95 mask fraud and federal agents announced the seizure of 1.7 million more counterfeit 3M masks in the New York borough of Queens as the breadth of a major scam concerning front-line health workers continues to grow.

Early Thursday, Sen. Maria Cantwell (D-Wash.), on her first day as chair of the Senate Commerce Committee, said she would ask the Federal Trade Commission to look into 1.9 million counterfeits shipped to hospitals in Washington state. The state hospital association announced earlier in the week that law enforcement had notified them that they’d been sold fake N95s branded as 3M products.

“We are looking to our FTC to make sure that there are no fraudulent products and materials out here, like masks, that my state is facing,” Cantwell said in a statement.

KHN reported Thursday that hospitals in Ohio, Minnesota and New Jersey also were sold thousands of fake masks. Later in the day, nurses on a covid-19 unit at Jersey Shore University Medical Center discovered yet another highly suspicious aspect to their 3M-branded respirators: The lot numbers printed on the masks did not match the lot numbers on the boxes they were shipped in.

“Lives are literally at risk because these workers are not protected,” said Debbie White, president of the Health Professionals & Allied Employees union.

KHN also reported that independent tests on masks given to New Jersey nurses — which matched the very lot numbers 3M had warned customers about in a fraud alert — actually showed filtration levels at 95% or above, as would be expected of a genuine N95.

Yet the 3M company said other critical aspects of the devices, such as how consistently and well they fit the face, could not be guaranteed. The Cleveland Clinic, which took purported 3M N95s off the shelves after discovering they were fake in January, said in a statement that their tests revealed “these masks were not effective.”

Federal law enforcement authorities have been tracking down these counterfeits for months. Homeland Security Investigations and its Global Trade Investigations unit have been coordinating with Border Patrol officials to seize more than 14.5 million counterfeit masks, nearly all falsely branded as 3M.

One of their cases made headlines Thursday, when Homeland Security Investigations and Queens District Attorney Melinda Katz announced an arrest and the seizure of nearly 1.8 million fake 3M masks in a warehouse.

Katz’s office got a tip that counterfeit masks were being offered for sale from a warehouse in the Long Island City section of Queens. Investigators posed as undercover buyers and purchased masks on several days to verify their authenticity.

The investigators determined that a health care system in the southern U.S. bought 200,000 of them, at prices that were more than twice what an authorized vendor is advised to charge, which is $1.27 each. Officials arrested the warehouse manager, a 33-year-old from Brooklyn, and said the investigation is ongoing.