The federal government has penalized 764 hospitals — including more than three dozen it simultaneously rates as among the best in the country — for having the highest numbers of patient infections and potentially avoidable complications. 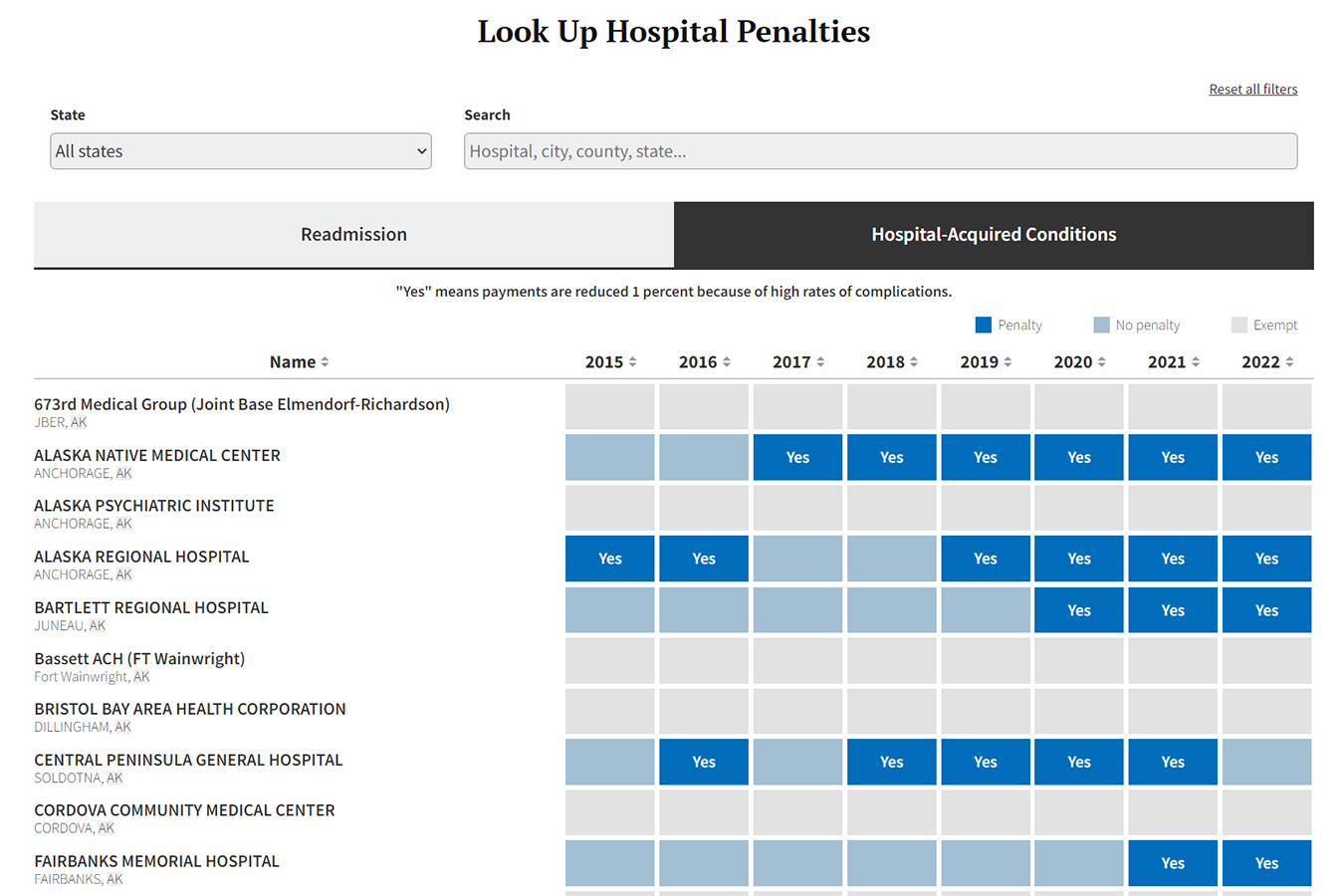 Look-Up Tool
Here are the hospitals hit with safety penalties for 2022. You can filter by location, hospital name or year.

The penalties — a 1% reduction in Medicare payments over 12 months — are based on the experiences of Medicare patients discharged from the hospital between July 2018 and the end of 2019, before the pandemic began in earnest. The punishments, which the Affordable Care Act requires be assessed on the worst-performing 25% of general hospitals each year, are intended to make hospitals focus on reducing bedsores, hip fractures, blood clots, and the cohort of infections that before covid-19 were the biggest scourges in hospitals. Those include surgical infections, urinary tract infections from catheters, and antibiotic-resistant germs like MRSA.

Eight years into the Hospital-Acquired Condition Reduction Program, 2,046 hospitals have been penalized at least once, a KHN analysis shows. But researchers have found little evidence that the penalties are getting hospitals to improve their efforts to avert bedsores, falls, infections, and other accidents.

“Unfortunately, pretty much in every regard, the program has been a failure,” said Andrew Ryan, a professor of health care management at the University of Michigan’s School of Public Health, who has published extensively on the program.

“It’s very hard to capture patient safety with the surveillance methods we currently have,” he said. One problem, he added, is “you’re kind of asking hospitals to call out events that are going to have them lose money, so the incentives are really messed up for hospitals to fully disclose” patient injuries. Academic medical centers say the reason nearly half of them are penalized each year is that they are more diligent in finding and reporting infections.

Another issue raised by researchers and the hospital industry is that under the law, the Centers for Medicare & Medicaid Services each year must punish the quarter of general care hospitals with the highest rates of patient safety issues even if they have improved and even if their infection and complication rates are only infinitesimally different from those of some non-penalized hospitals.

In a statement, CMS noted it had limited ability to alter the program. “CMS is committed to ensuring safety and quality of care for hospital patients through a variety of initiatives,” CMS said. “Much of how the Hospital-Acquired Condition (HAC) Reduction Program is structured, including penalty amounts, is determined by law.”

In allotting the penalties, CMS evaluated 3,124 general acute hospitals. Exempted from the evaluation are around 2,000 hospitals. Many of those are critical access hospitals, which are the only hospitals serving a geographic — often rural — area. The law also excuses hospitals that focus on rehabilitation, long-term care, children, psychiatry, or veterans. And Maryland hospitals are excluded because the state has a different method for paying its hospitals for Medicare patients.

For the penalized hospitals, Medicare payments are reduced by 1% for each bill from October 2021 through September 2022. The total amount of the penalties is determined by how much each hospital bills Medicare.

A third of the hospitals penalized in the list released this year had not been punished in the previous year. Some, like UC Davis Medical Center in California, have gone in and out of the penalty box over the program’s eight years. Davis has been penalized four years and not punished four years.

“UC Davis Medical Center is usually within a few points of the [Hospital-Acquired Condition Reduction Program] threshold, so it’s not unusual to move in and out of the program year to year,” UC Davis Health said in an email. It said Davis ranked 38th out of 101 academic medical centers that use a private quality measurement system.

The Cleveland Clinic said that its satellite hospital in Avon has received awards from private groups, such as an “A” grade for patient safety from the nonprofit Leapfrog Group. Both it and Cedars-Sinai touted their five-star ratings. In addition, Cedars said that overall assessment comes even though the hospital deals with large numbers of very sick patients. “This [star] rating is particularly meaningful because of the complexity of the care that many of our patients require,” Cedars said in a statement.

Other hospitals declined to comment or did not respond to emails.

The KHN analysis found that the government penalized 38 of the 404 hospitals that were both included in the hospital-acquired conditions evaluation and had received five stars for “overall quality,” which CMS calculates using dozens of metrics. Those include not just infection and complication rates but also death rates, readmission frequencies, ratings that patients give the hospital after discharge, and hospitals’ consistency in following basic protocols in a timely manner, such as giving patients medicine to break up blood clots in the 30 minutes after they display symptoms of potential heart attacks.

In addition, 138 of 814 hospitals with the next-highest rating of four stars were docked by the program, KHN found.

KHN’s analysis found major discrepancies between the list of penalized hospitals and how Medicare’s Care Compare rated them for virtually the same patient safety infection rates and conditions. On the Medicare site, two-thirds of the penalized hospitals are rated as “no different than average” or “better than average” for the public safety measures CMS uses in assigning star ratings. The major differences center on the time frames for those measures and the structure of the penalty program. The Medicare website, for instance, evaluated only one year of infection rates, rather than the 18 months’ worth that the penalty program examined. And the public ratings are more forgiving than the penalties: Care Compare rates each hospital’s patient safety metric as average unless it’s significantly higher or lower than the scores of most hospitals, while the penalty program always punishes the lowest quartile.

Nancy Foster, the vice president for quality and patient safety at the American Hospital Association, said the penalties would cause more stress to hospitals already struggling to handle the influx of covid patients, staffing shortages, and the extra costs of personal protective equipment. “It is demoralizing to the staff when they see their hospital is deemed unsafe or less safe than other hospitals,” she said.

Dr. Karen Joynt Maddox, co-director of the Center for Health Economics and Policy at Washington University in St. Louis, said it was time for Congress and CMS to reevaluate the penalty program. “When this program had started, the thought was that we would get to zero” avoidable complications, she said, “and that hasn’t proven to be the case despite a really good effort on the part of some of these hospitals.”

She said the hospital-acquired conditions penalty program, along with other quality-improvement programs created by the ACA, feels “very ready for a refresh.”