One New Year’s Day, Rob Purdie woke up with a headache that wouldn’t quit. Vision problems, body aches and a slight fever followed. At the emergency room, the Bakersfield, California, resident was given antibiotics, which didn’t touch his symptoms. His headache turned into cluster headaches and the fatigue became worse.

“I was not really functional,” he said in a recent interview, recalling the beginning of his eight-year struggle with the mystery illness.

After five weeks, he ended up at Bakersfield’s Kern Medical, home to the Valley Fever Institute. A resident physician quickly realized the cause of the symptoms. A spinal fluid sample confirmed Purdie was suffering from valley fever, a fungal infection that occurs in the deserts of the Southwest, primarily Arizona and California. The infection had spread from his lungs into his brain, causing inflammation and headaches.

He was in and out of the hospital for a year with debilitating symptoms. There is no cure for valley fever; doctors use existing antifungal medications that often don’t relieve the symptoms. He tried three oral antifungal drugs and finally ended up with injections of amphotericin B — “salvage therapy,” meaning it is a drug of last resort — which he is still on, eight years later.

Purdie, 39, now works for the Valley Fever Institute, teaching others about the poorly understood disease. He still has no clue how he inhaled the spore that causes it. “I was probably out doing yardwork,” he said, “and took the wrong breath.”

Valley fever — coccidioidomycosis (“cocci” for short) is the scientific name — is an “orphan disease.” An orphan disease is defined in the U.S. as one affecting fewer than 200,000 people. Valley fever is diagnosed in the range of 10,000 to 15,000 cases a year in the U.S. with 160 fatalities, though both numbers are likely several times higher in reality because many cases are never identified. That’s why it’s often hard to attract attention to developing a vaccine.

In the 1980s, a promising vaccine candidate failed in clinical trials. There has been no other candidate for a vaccine until recently. Now, with mouse studies showing promise, there is a renewed push. Dr. John Galgiani, head of the University of Arizona’s Valley Fever Center for Excellence, is heading up vaccine research there and believes the vaccine shown to prevent valley fever in mice should be available for dogs, which also get infected in large numbers, as soon as next year. A veterinary vaccine company, Anivive, is developing it. “It’s very promising,” said Galgiani.

The same vaccine is in the early stage of development for humans, though it’s still years away.

One drug, nikkomycin Z, has cured the disease in mice; experts believe it could do the same for humans. It’s being developed by the University of Arizona with funding from the National Institutes of Health, the Food and Drug Administration and other sources.

Valley fever is getting more attention for a few reasons. The number of cases has been increasing, and a study last year predicted it may spread north through the West as the climate warms. By 2095, five more states may be added to the list of 12 where the fungus now lives, growing its range in a swath across the West and into the Great Plains from Texas to Montana and North Dakota. The fungus is also found in Mexico and in Central and South America.

U.S. House Minority Leader Kevin McCarthy represents parts of California’s Central Valley, where cocci is prevalent. It’s a voting issue there and the Republican has made it a priority, bringing federal dollars to bear for research, surveillance and awareness.

The big problem with developing a vaccine is the relatively small market. The cost of studies to bring the drug to market, Galgiani estimated, is $50 million, while a federal study in 2000 pegged the cost of developing a vaccine at $360 million — though Galgiani believes it could be done for half that, still a hefty cost for a small group of patients.

“We don’t compete effectively against other investment opportunities,” he said.

Two types of the fungus Coccidioides cause valley fever. They dwell in desert soil between 2 inches and a foot deep and when disturbed become suspended in the air and are occasionally inhaled.

Because the pneumonia-like symptoms are similar to those caused by the novel coronavirus, many cases of valley fever are likely being reported as COVID-19, Galgiani said, which means they are not getting treatment with antifungal medications that can temper symptoms if applied early on.

The infection can spur inflammation that “causes scarring and damage to parts of your nervous system,” Galgiani said. “Early diagnosis means less damage.”

Valley fever case numbers have grown substantially in the past five years, though they are down this year, perhaps because many doctors mistake the condition for COVID-19.

Most cases resolve on their own without treatment. Yet in 5% to 8% of diagnosed patients, the disease spreads to skin, bones and organs, and can be deadly. If it reaches the brain and spinal cord, as it did with Rob Purdie, it can cause meningitis, or swelling of the membranes. These patients, if they don’t die, may need antifungal treatments for life. 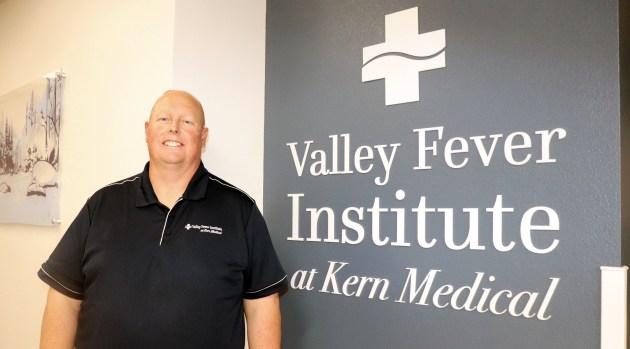 Blacks and Filipinos are four times more likely to have these serious effects than other demographic groups, according to Galgiani.

An epidemic devastated prisoners in the San Joaquin Valley, the southern section of California’s Central Valley, in the early and mid-2000s. Investigation showed the rate in two prisons — which had populations with higher numbers of minorities than the surrounding communities — was hundreds of times higher than in the surrounding area. Eventually, more than 30 prisoners died and many more had serious chronic infections.

The high season for infection is late summer and fall. Some 95% of the cases occur in the Central Valley and the Phoenix area. “They are in urban areas; you don’t have to be out on the desert to be infected,” Galgiani said.

Compounding the effects of valley fever is that it often goes undiagnosed. Even in Phoenix’s Maricopa County — where the fungus is endemic in the desert soil and 50% of the nation’s cases occur — it’s not on the radar screen of many doctors. Further complicating a diagnosis is that test results are often wrong and it may take two or three tests to identify the disease.

The lack of awareness of valley fever is one of the factors that led Purdie to take a job last year as outreach coordinator of the Valley Fever Institute. “There’s a lot of misinformation about it,” he said.

The vaccine that experts are banking on is called Delta CPS-1. It has proved very effective in mice in published studies and could be on the market as soon as next year for dogs. It’s estimated that 60,000 dogs contract valley fever every year in what’s known as the “Valley Fever Corridor” between Phoenix and Tucson, Arizona, and the numbers are probably similar for Bakersfield and other parts of the Central Valley. Symptoms in canines are similar to those in humans.

The same vaccine could one day prove effective in humans, though trials are years and many millions of dollars away. “It’s a great candidate for human immunization,” said Dr. Tom Monath, managing partner and chief scientific officer of Crozet BioPharma, which is working on the vaccine. “It’s hard to offer any promises, but it could take less than 10 years.”

As Threat of Valley Fever Grows Beyond the Southwest, Push Is On for Vaccine