President Donald Trump has vowed that his nominees to the Supreme Court will vote to overturn Roe v. Wade, the landmark 1973 ruling that legalized abortion nationwide.

He seems to have made good on this promise with the appointment to the high court of Neil Gorsuch, whom experts expect to rule that way if given the chance.

Trump will now get another opportunity to reshape the bench with this week’s retirement announcement by Justice Anthony Kennedy.

But a Kaiser Family Foundation poll out early Friday suggests that’s not what most of the public wants.

Among Democrats and independents, support for keeping the ruling intact is even stronger, 81 percent and 73 percent respectively, according to the poll.

But the opposition does not hold across party lines.

A majority of Republicans — 53 percent — said they want the case reversed. (Kaiser Health News is an editorially independent program of the Kaiser Family Foundation.) 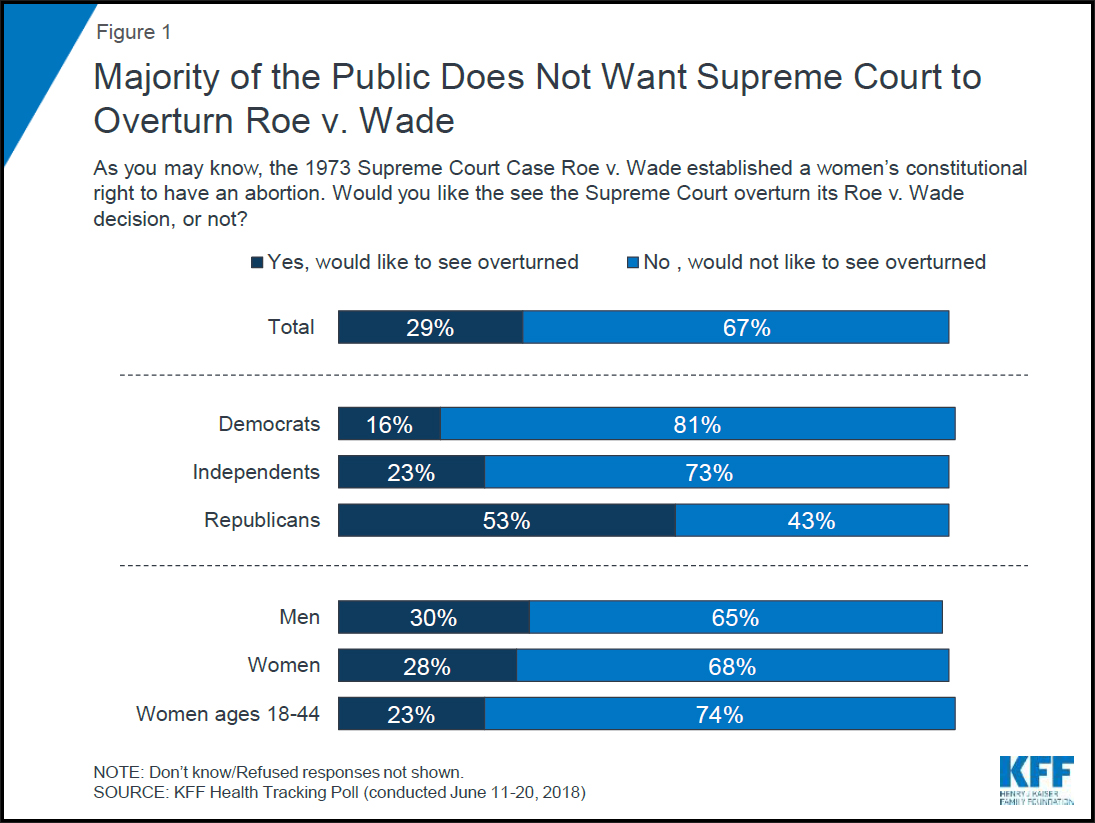 Respondents to the poll also opposed recent Trump administration efforts to restrict federal funding for Planned Parenthood on the grounds that it uses non-federal funds to perform abortions.

A total of 57 percent opposed the new rules, including 67 percent of Democrats and 55 percent of independents. Even a plurality of Republicans opposed the rules — 48 percent, compared with 46 percent who expressed support.

Those findings are in line with a recent deep dive into public opinion on abortion by Gallup.

Gallup, which has been asking Americans about abortion since 1962 — more than a decade before Roe v. Wade was decided — found that unlike other social issues, for which public opinions have changed over time, abortion views have stayed relatively stable. And the public is equally divided between those who call themselves “pro-choice” (48 percent) and “pro-life” (48 percent).

Like the Kaiser Family Foundation, Gallup found strong support for Planned Parenthood, with 62 percent saying they hold a “favorable opinion” of the reproductive health group.

Republicans were the only major demographic group with an unfavorable opinion of Planned Parenthood (63 percent) along with those who identify themselves as “pro-life” (59 percent).

But even in those groups more than a third of respondents approved of Planned Parenthood. Large majorities of Democrats, independents, men, women and people of all age groups have a favorable opinion of the organization, despite recent attacks on it by Trump and congressional Republicans.

Gallup said that support has remained relatively consistent since 2015, although margins have grown narrower since the 1990s.

The Kaiser Family Foundation poll was conducted June 11-20 among 1,492 adults. The margin of error is +/-3 percentage points for the full sample.

Trump’s Next High Court Pick Likely To Target Abortion. Is That What The Public Wants?