Assisted living residents who abuse other residents or staff are likely to have dementia or severe mental illness, afflictions that pose unappreciated risks in facilities occupied by vulnerable elderly adults, a new study reported.

That abuse can include physical, verbal and sexual incidents, according to a study published online last month in the Journal of Applied Gerontology. Other studies have examined resident aggression in nursing homes, but the authors said few have explored the problem in assisted living.

The study examined data collected in a 2010 federal survey in which facility administrators were asked about instances of aggressive or threatening behavior by residents in the previous month, among other questions.

Gilbert Gimm, the study’s lead author, said he was surprised to discover how prevalent resident aggression and abuse was in assisted living. Older residents’ frustration with their declining ability to care for themselves might be a factor that leads them to abuse others, he said.

Researchers said their estimates might be low because resident aggression that happened out of staff members’ sight was not captured in the federal survey. 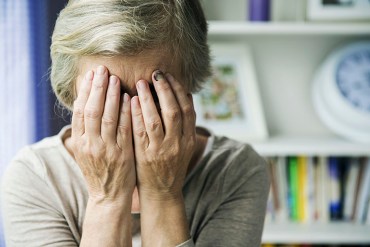 Elderly people often enter assisted living when disabilities and illnesses compromise their ability to live alone safely. Once they enter a facility, cognitive impairment, behavioral issues or physical limitations can leave them vulnerable to mistreatment.

When assisted living residents are seriously injured, they may be hospitalized or moved to a different location in their facility, but both can be highly disruptive for seniors who don’t cope well with transitions, Gimm said.

People with dementia show memory loss, and have difficulty communicating and controlling their behavior. The condition has been found to make them aggressive and unable to recognize when they harm others, factors which the study said may contribute to the prevalence of abusive behavior. Earlier research cited by the authors found that 42 percent of assisted living residents in the U.S. have dementia in some form.

People with dementia can be unnerved by new situations, like a staffing change. Anything can seem unfamiliar to those suffering from short-term memory problems. Their fear of the unknown may cause them to lash out, trying to fight back or flee, said Gimm, an associate professor in the Department of Health Administration and Policy at George Mason University in Fairfax County, Va.

The Applied Gerontology study said increased training is needed for staff and caregivers to detect and manage residents with dementia and mental illness.

Family members should look for assisted living facilities that have separate units for dementia patients with specially trained staff who can spot and manage the early warning signs of aggressive behavior, Gimm said.