This story is part of the series "In the Gap: Voices from the Health Divide," a news and dialogue partnership between WHYY and 900 AM WURD. Taunya English is participating in a reporting partnership that includes

In any given year, five to 15 children in Philadelphia die of asthma. Uncontrolled asthma doesn’t take as many young lives as cancer, but most asthma deaths are preventable. And pediatricians admit to a poor track record helping families keep the condition in check.

“Even if it doesn’t fit into their life, we say: ‘You have to do this,’ said pediatrician Hal Byck, who cares for kids at Nemours Children’s Clinic in Northeast Wilmington, Del. Byck’s philosophy is different from what he described as the prevailing attitude of the medical system that he thinks needs to change: “If they don’t do it, it’s not our fault: it’s their fault.”

Asthma is a chronic inflammatory disease that requires lifestyle changes to tamp down triggers and vigilance to ward off attacks. In a typical attack, airways become inflamed and swollen; muscles squeeze and tighten; and mucus build-up makes breathing difficult. But it’s the time after the attack that can make managing the disease a challenge.

“When you no longer have that asthma attack, there’s so many other pressing issues in your life, that the asthma takes the back seat until the next asthma attack,”  Byck said. “We have to try to get them in again, when they are not wheezing, to discuss the importance of taking preventive medicine.”

“I think a lot of people are fine with that the first two weeks, three weeks, four weeks, but as time goes on and they see their child not really having these wheezing episodes, people in their mind think giving a medicine everyday might be harmful, so they stop it because the child is doing well,” Byck said.

Pediatrician Tyra Bryant-Stephens leads the asthma prevention program at the Children’s Hospital of Philadelphia. She says it never works to just send parents home with medicine. They need to understand the drug side effects, and why the medication is less harmful than not using it.

Bryant-Stephens says many parents struggle to accept that asthma is a chronic illness.

“Who wants to say my child is sick every day of his life?” she said.

On the policy side, Bryant-Stephens would like to see insurance companies pay for a bundle of care services including time with a health educator and help making the home asthma friendly.

The team approach can help all children with asthma, but Bryant-Stevens points out that the stakes are particularly high for black and Latino communities. A screening study at 16 Philadelphia schools found the highest asthma rates at schools with the most African-American students.

“Kids who are black, kids who are Latino, they have two to three times more hospitalizations and are five times more likely to die,” Bryant-Stephens said.

Genetics likely plays a role, but poverty and living in an urban environment also contribute to risk.

“The families that attend our classes were better able to manage their medications, less likely to go to the emergency room and hospital,” Bryant-Stephens said.

The program enrolls about 100 children each year, but Bryant-Stephens guesses that 3,200 patients could probably use the help.

Barbara Washington worked as an asthma educator for the Health Promotion Council before that program lost its funding two years ago. She says moving patients into regular treatment starts with asking lots of questions.

“When was the last time you saw your doctor? Do you have a regular doctor? Is the school aware your child has asthma?” Washington said.

She also understands how frightening it is when your child can’t breathe. Washington’s daughter is an adult now, but developed asthma at age 6.

“Not knowing what to do, I would just wrap her up and we would rush off to the emergency room,” she said. 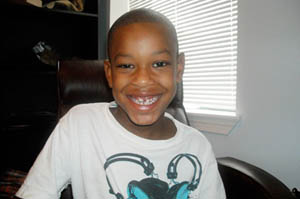 Now that his asthma is controlled with medication, Cameron James says that when playing tag, his legs give out long before his breath does. (Photo by Taunya English/WHYY)

In Wilmington, mom LaSheena James vacuums a little more often and keeps her son’s daily inhaler medicine right beside his toothbrush. Cameron is a first-grader.

“He did miss quite a few days. It would happen in the spring, he’d miss a few days, then he’d come back to school. The change of season is when it occurs more frequently,” James said.

Cameron carries an inhaler in his bookbag and has a backup stored in his classroom. The Jameses have no pets and smoking is strictly forbidden in their home.

“It’s very scary. I’m constantly watching the news for the pollen count. I’m kind of afraid to have him participate in outdoor activities,” James said.

Actually, Cameron says, recess is no problem these days.

“Tamir, Elan and Nazir and Jaden–we play catch and tag. I’m faster than the little kids and the big kids, except for Tamir. He’s faster than all of us,” he said.

Cameron says his legs give out long before his breath does, and pediatricians say that’s one sign that a child’s asthma is under control.

Hal Byck is Cameron’s doctor and says that, working by himself, a doctor is not enough.

“Without getting into the community we are never going to make great strides in treating asthma,” Byck said.

“I do think it is reasonable to pay for community health workers, to have at least a couple of visits, [it] doesn’t cost that much to do that and one hospitalization you’re talking thousands of dollars,” said Children’s Hospital pediatrician Bryant-Stephens.

Managing Asthma With More Than Medicine