It’s well known that the listed charges hospitals set for surgeries and other procedures — recently spotlighted by Medicare — bear little resemblance to the actual prices most patients end up paying.  An analysis by Castlight, a San Francisco company that helps employers and workers compare provider prices, also finds that the hospital charges bear little relationship to the quality of the care.

As the following Castlight charts show for New York, Boston, Los Angeles and Washington, an expensive charge for a joint replacement is no guarantee that the hospital is safer than one that lists a cheaper charge. The Boston and Washington rates show that the most expensive high quality hospital will replace a knee for less than the most expensive low and average quality hospitals. In New York City, there’s a huge overlap between average and high cost hospitals, and in both New York City and Boston one could find a moderate quality hospital that performs a knee replacement for no more than a low quality hospital. Overall, Castlight said there was no statistical relationship between the cost of the knee replacements and the quality of the hospitals.

Castlight provided the charts to Kaiser Health News. A caveat: the Medicare data include lots of patients who were in the hospital for something other than a joint replacement.

Castlight performed a similar analysis with a common procedure for those too young for Medicare: pregnancy. There too, Castlight found no noticeable relationship between the price self-insured companies paid for pregnancy and delivery services — as recorded in Castlight’s database of client claims — and the quality of the care as judged by data from the Leapfrog Group, a nonprofit run by employers. That data looked at whether babies were delivered at term, without needless cesarean sections and other measures of quality.

“There’s no correlation between what you pay and what you get,” said Dr. Jennifer Schneider, Castlight’s senior director of clinical design. “You could actually get an above-average delivery from a below-average place in terms of cost.”

In fact, the Castlight charts below show that in Chicago, New York and Seattle metropolitan areas, the hospital that was the most expensive for pregnancy and delivery was also rated below average in quality by Castlight.  (Not all hospitals respond to Leapfrog’s surveys, so not all were rated.) 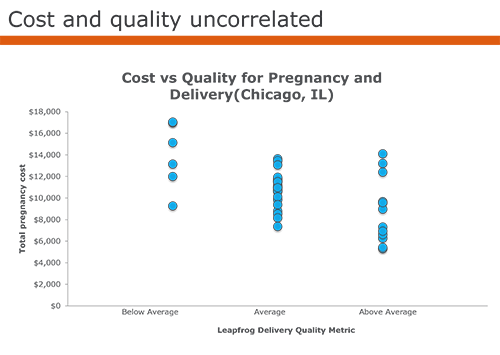 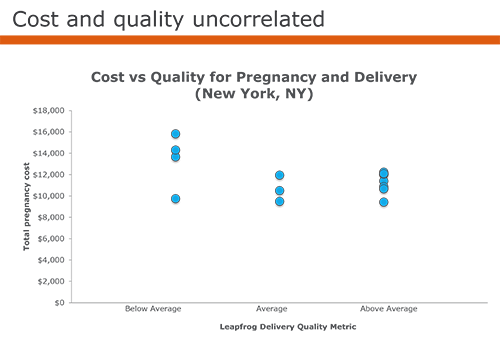 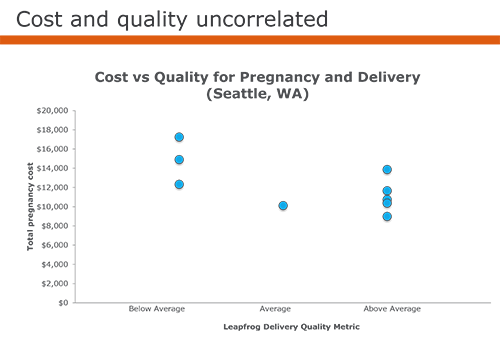 At Hospitals You May Not Get What You Are Charged For