A summer camp for children with disabilities in Nashville does things a little differently. Rather than accommodate the campers’ physical challenges, therapists make life a bit tougher, in hopes of ultimately strengthening the kids’ ability to navigate the world.

Priceless Garinger’s left arm is wrapped from shoulder to fingertips in a neon-pink cast on the day I visit. The left one is the 12-year-old’s strong hand. It’s her other arm and hand that have been the problem since she was born with cerebral palsy. She can move her right arm but has difficulty grasping anything.

“Right there, where you bend your arm, it itches right there,” she said, using a plastic spoon to scratch her elbow, which is out of reach.

This day camp is organized by Vanderbilt Children’s Hospital. Some campers, like Priceless, have cerebral palsy; others have had a brain tumor removed or had a stroke. All of them have a weak side of the body they rarely use. At High Five Constraint Camp, the children are forced to try to strengthen that weak side.

“Yeah, there it is,” Priceless said as she bumps bare arms with a fellow camper — an improvised fist bump.

This kind of rehab is known as constraint-induced movement therapy. Similar camps are run by children’s hospitals around the U.S. during the summer months. The approach is based on research by Edward Taub and his team at the University of Alabama. He hypothesized years ago that the affected limbs suffer from “learned nonuse.”

Priceless takes her turn on the indoor obstacle course at the hospital’s pediatric rehab facility, located at a Vanderbilt satellite campus on Nashville’s outskirts. She rides a modified zip line, wrapping her long legs around the swinging seat — swooping along and then dropping into a pit of overstuffed pillows.

The occupational therapists prompt her to climb out. They cheer her on but don’t immediately help. The struggle is the point.

Priceless finds her way out, and next plops down on a scooter. She grunts as she tries to propel herself with a hand that she can barely control.

“I’m not going anywhere,” she said.

Her therapist gives her a boost toward the finish line, where Priceless hits a buzzer that sounds an alarm and draws cheers from the other campers.

The restrictive rehab techniques are increasingly used with kids who have cerebral palsy, though there hasn’t been much research to show the approach is better than traditional physical therapy. And some kids become overly frustrated or even refuse to cooperate.

To outsiders, the strategy can seem mean.

“If the families have never heard of it before, it’s kind of like, ‘What? You’re going to cast their good arm and take away their really functional hand?’” said occupational therapist Stephanie Frazer.

This particular day camp started a decade ago as part of a research project at Vanderbilt University. When the study concluded, the camp shut down. But Frazer revived it in recent years because she believes the approach and the setting are effective.

“Whenever we’re casting that good arm, the brain is like, ‘I have this other arm here.’ And they start using it more and it starts creating pathways,” she said. “They actually make a lot of progress in a short amount of time.” 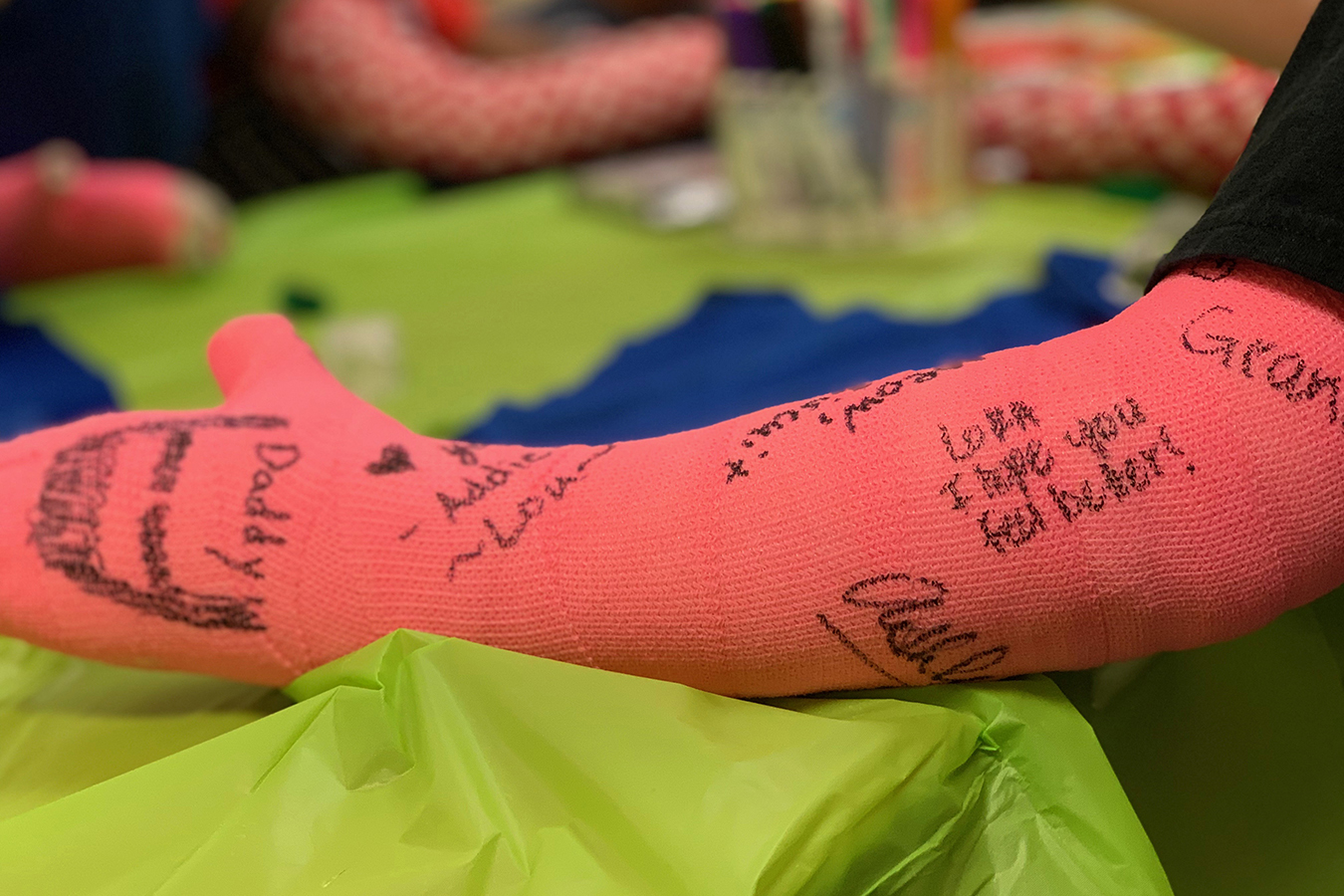 The kids’ temporary casts end in a mitten shape to minimize any wiggle room and attempts to rely on that stronger hand while at camp.(Blake Farmer/Nashville Public Radio)

Even snack time can turn into a therapeutic experience. Playing with food is required at this camp. The kids take pretzels and stab them into blocks of cheese.

Some blow bubbles in their juice, partly out of frustration. Some resort to using the arm that’s in a cast to feed themselves.

This is the third summer of camp for Priceless, who wasn’t exactly enthusiastic when she started. But she’s beginning to see how helpful it would be to be able to rely on both hands to do things like manipulate a remote control.

“I want to play with my iPad and watch TV,” she said.

The parents of the campers are even more motivated because they understand how the use of two hands could make independence in adulthood much more feasible for their children.

From past experience, Garinger said, she suspects that for the first few months after this camp session, Priceless will use her weak hand more often. But in past summers, she eventually has reverted to relying on her strong side.

Still, Garinger said, she has witnessed other, permanent successes.

Garinger, a special education teacher, met Priceless when the little girl was 3; she adopted Priceless two years later. The preschooler needed to use a walker at the time. Now she walks on her own.

Being able to rely on both hands would go a long way toward helping Priceless achieve her dreams, her mom said.

“She hopes to be a police officer, so the sky’s the limit. We’ll see,” Garinger said, pausing as her voice shook with emotion. “I mean, it’s probably not realistic, but I always tell her she can do what she wants when she grows up.”

The first step for Priceless, Garinger said, is strengthening her arm enough to give a high-five — or a two-arm hug.

At This Summer Camp, Struggling With A Disability Is The Point