As president and CEO of the largest municipal health care system in the U.S., Alan D. Aviles is struggling to meet the medical needs of the poor and uninsured while facing deepening budget woes. 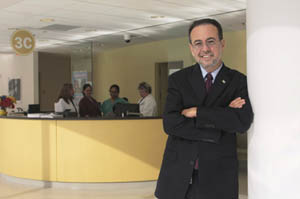 Last year, the Health and Hospital Corporation treated more than 1.3 million New Yorkers — 452,000 of whom were uninsured — at its 11 acute care hospitals, four skilled nursing centers, six diagnostic and treatment centers and nearly 80 community-based clinics spread throughout the five boroughs.

But HHC also is in the midst of a “restructuring plan” that would lead to savings of $600 million over the next four years. So far, the health system has trimmed about half of this amount by closing small clinics, mandating a hiring freeze and reducing its workforce 10 percent by 2014. Aviles has said that he will work to “stabilize HHC’s finances over the next few years” without compromising the quality of patient care. But HHC is now facing an even more bleak financial picture: a $174 million reduction in state Medicaid funding, $50 million to $100 million in potential pension cost increases and a guarantee of decreased federal funding. These factors are forcing the health care system to squeeze another $250 million — in addition to the targets set in the existing restructuring plan — from its budget. At the same time, Aviles will be focusing on navigating HHC through the complexities of the federal health law, which include a sharp Medicaid expansions and changes in funding streams.

Aviles, who is HHC’s longest serving president, says the law has potential to improve care and expand coverage, but says there are some areas in which New York will experience only “limited” benefits. He also worries about the impact of some parts of the law, such as its reductions in disproportionate share hospital funding, which provides federal dollars to hospitals that serve large numbers of uninsured patients. (DSH funding reductions are based on the idea that DSH payments will be less crucial as the health law expands insurance coverage to more people.) Ultimately, he says, HHC’s survival will depend on a fundamental “change that enables better care at lower costs.”

Q: What concerns do you have in regard to implementing health care reform at one of the largest public hospitals systems in the country?

A: On the one hand, we welcome all the aspects of health care reform that promise to expand coverage and hopefully align reimbursement with true value — rather than volume — through an accountable care approach. But the benefit of expanding coverage is likely to be limited in New York — largely because our Medicaid eligibility thresholds are already nearly at the levels established under the Affordable Care Act. Only about 90,000 individuals state-wide will be newly eligible for Medicaid starting in 2014.

On the other hand, the Affordable Care Act has a very clear downside for public hospitals and other safety net providers because it ultimately will reduce a form of supplemental Medicaid funding known as disproportionate share hospital payments by about 50 percent. For our system, that [amount] is a potential loss of roughly $500 million annually if it [is] reduced in proportion to the present [state-by-state] allocation of DSH funds. It’s a national reduction. It really depends on [whether the calculations take into consideration] a state’s residual uninsured as well as the extent to which the [funds are] channeled to providers who are actually serving uninsured patients. That could mitigate the impact for systems like ours that are certainly performing a safety net role.

Q: How does HHC’s commitment to caring for undocumented immigrants factor into these concerns?

A: The health care reform legislation is, to say the least, not very friendly to undocumented immigrants. Not only are they not included in any of its benefits, but if you are undocumented, you can’t even purchase a health care insurance policy on the exchange at full market price. So that is something we are very focused on. We know that a very large percentage of the uninsured patients we served last year are undocumented, and they will continue to be uninsured going forward — even as some of the funding at the federal level potentially gets reduced significantly. That’s going to require some vocal heavy lifting by our city and our state to fill some of that gap and it’s going to require us to really demonstrate that we are being as efficient and as cost effective as is possible.

Q: What is your message to policy-makers in this regard?

A: We are trying to make the case that it’s very important that our elected officials need to be careful not to destabilize Medicaid — particularly not to destabilize large safety net systems like ours that are so dependent on Medicaid as a revenue source. We have a combination of Medicaid reimbursement being reduced because of the state budget problems, which is happening in New York as it is across most of the country, and we have potential simultaneous reduction of disproportionate share funding. That really presents a significant challenge for health systems like ours. The implications go beyond our low-income Medicaid patients and even our uninsured patients because HHC, like many public hospitals across the nation, provide essential community services that are expensive and don’t actually pay for themselves, but are critical for the common good.

Q: So then going forward, what are the biggest priorities for HHC, especially in terms of funding?

A: We try to keep our priorities focused on the central mission of providing care to the communities that we serve. I mean, there’s no question that the cost containment pressures on everyone in health care are going to continue to intensify. And survival going forward is going to turn upon a capacity for fundamental adaptive change that enables better care at lower costs. And we’re very focused and determined on both of those fronts. I think we are making steady progress. But we realize that we need to be on the leading edge of transition to a new payment system modeled on principals of accountable care because the current fee-for-service Medicaid reimbursement system, to be precise, is no longer working too well for systems like ours.