In her Manhattan apartment, Josephina Deltejo is trying to coax her 84-year-old mother Brunhilda Ortiz to get ready to leave the house. As she does most nights, Deltejo makes up a story to get her mother, who has dementia, to cooperate.

In Spanish, Deltejo asks her mother if she would rather go to Miami or the Dominican Republic. “She says she wants to go to the Dominican Republic,” Deltejo translates, and then she helps the older woman gather her things and go downstairs to a waiting van. The driver will bring her mother to the Elderserve At Night program at the Hebrew Home At Riverdale in the Bronx. It’s a kind of day camp–but at night, for people like Ortiz who suffer from Alzheimer’s disease. 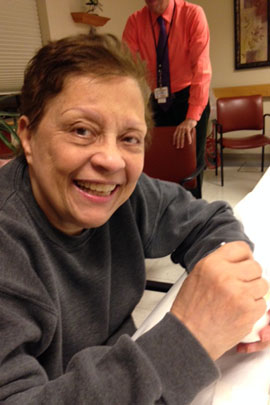 Brunhilde Ortiz’s condition improved dramatically, her daughter said, after the 84-year-old started attending a “daycare at night” Alzheimer’s program at the Hebrew Home at Riverdale in the Bronx, N.Y. Ortiz died of heart failure a few months after this story was reported. (Wendy Steinberg/Hebrew Home)

Deltejo says her mother was once a proud, hard-working immigrant who raised four children on her own, but she has changed. “Her memory has been totally lost. She’s very disoriented,” Deltejo says. “She doesn’t communicate at all.”

For months, Ortiz would sleep during the day and be up much of the night wandering around the apartment. Her daughter was too afraid to sleep—afraid her mother might fall and hurt herself or even try to leave the apartment.

But now Deltejo is finally getting some sleep – and her mother is being well cared for along with about 40 other clients seven nights a week. Activities may include arts and crafts, cooking, yoga or Zumba, and even live performances. On the night we visited, Juan Ortega played American and Spanish favorites on his synthesizer.

Though it looks like entertainment, each activity has a therapeutic benefit for memory-compromised people, says Deborah Messina, who runs the overnight program. She described a common problem among dementia patients known as “sundowning.” It is thought to affect about 20 percent of Alzheimer’s patients.

“Their day is our night and vice versa, and they are confused about it,” Messina says. “It is usually at dusk where an agitation comes, a confusion comes.”

Many people with dementia are more alert at night than they are all day – just when their caregivers need to sleep. Rather than try to alter this mismatch, Elderserve At Night embraces it.

The program is the brainchild of David Pomeranz, the executive director of the Hebrew Home, who opened the program in 1996. He says the idea came to him after hearing heartbreaking stories from struggling families.

“People were sleeping in front of doorways because they were concerned that mom or dad would wander out of the house,” Pomeranz says.

Those families desperately needed a safe place for their loved ones at night — and a decent night’s sleep. And the Hebrew Home set out to meet that need.

It’s a similar philosophy – to meet clients’ needs wherever they may be – held by the therapists and social workers who staff Elderserve now. “Here, their behaviors are normalized,” Pomeranz explains. “Everything is OK. Activities are structured for them to be successful. They eat, they relax — they can be themselves. To us is this is who they are. We’re not the family members who are dealing with that incredible loss of seeing someone who was and isn’t any more.”

The program is covered by some private insurers and by New York Medicaid, the federal-state program for poor and disabled people. To the extent that it can keep people out of nursing homes, it can save money.

Medicaid pays a typical nursing home in New York about $320 per day versus $200 for the overnight program. But so far, few if any other overnight programs exist solely for people with dementia. Pomeranz thinks the idea hasn’t caught on with other nursing homes because it is difficult to find staff who are willing to work the overnight shift. It was also important to get Medicaid and other insurers to reimburse for the program, and that funding has not been pursued in every state.

Elderserve At Night tries to serve its clients even as their conditions worsen. Next door to the room where Ortiz and others are dancing and enjoying the live music, it feels like another universe. The music is soft, the lights are low and a subtle scent of lavender is in the air. People with more advanced disease spend the evening here. Some are sitting around a table, each with a caseworker, who helps them work with blocks and basic puzzles.

Several other people are slumped in wheelchairs, getting hand massages from the social workers. Though their faces look expressionless, they seem calm. For people with advanced dementia who might otherwise become agitated at night, this room is a sanctuary, says Messina. 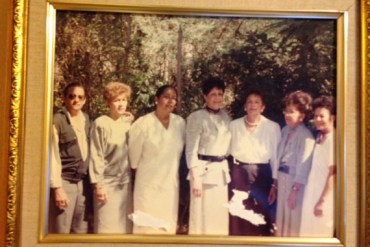 Brunhilde Ortiz stands tall in the center flanked by her siblings on a visit to the Domincan Republic decades ago. (Courtesy Josephina Deltejo)

When the sun comes up tomorrow, all the clients will be given breakfast and everyone here will return home. Ortiz will take the van back to her apartment in upper Manhattan where she will be greeted by her daughter before she leaves for work. Deltejo says she doesn’t know exactly what happens during her mother’s nightly sojourns, but she is grateful.

“She was very weak when she started there. We had to carry her up and down [the stairs}. But now she walks up and down. She walks to Broadway,” Deltejo says. “She would not react to any of the conversation. Now she does. She’s a totally new person. I would say she’s 200 percent better.”

Deltejo says the program helped to improve her mother’s life and her own life as well. But Ortiz was battling congestive heart failure, and she succumbed to the disease a few months after we reported this story.

Awake, And Safe, All Night Despite Dementia