After reassuring seniors that Medicare is not part of the new health insurance marketplaces, administration officials have a warning for anyone who may have other ideas: selling marketplace coverage to people who have Medicare is illegal.

Starting Jan. 1, most Americans will be required to have health insurance or pay a penalty and those without insurance will be able to buy it from the new Internet-based marketplaces opening Oct. 1. But also next month, the enrollment period opens for Medicare beneficiaries to buy prescription drug coverage or the Medicare Advantage medical policies that are an alternative to traditional Medicare. 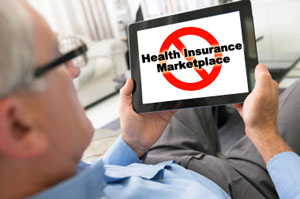 Federal officials are eager to get the word out that seniors and disabled individuals enrolled in Medicare Part A — which covers hospitalization and limited nursing home care and is free for most beneficiaries – do not need to buy a marketplace plan, because they are already meeting the insurance requirements.

And no one needs to sell them one, either, according to information on a new “Medicare & the Marketplace” government webpage and in a “frequently asked questions” flyer officials recently distributed to Medicare counselors and other seniors advocates.

“It’s against the law for someone who knows that you have Medicare to sell you a Marketplace plan,” both sources say.

There can be serious consequences for anyone who violates the law: fines of up $25,000 or up to five years imprisonment or both.

With so much publicity surrounding the opening next month of the new Internet-based marketplaces, seniors could easily think the health law’s marketplaces, also called exchanges, offer options for them too. Federal officials have been eager to steer them away, in messages on both the exchange and Medicare sites and in a special notice that will appear in the 2014 Medicare & You handbook mailed this month to 52 million beneficiaries.

“We want to protect Medicare beneficiaries and remind them their benefits aren’t changing, and the marketplace doesn’t require them to do anything differently,” a Medicare spokesman said.

The enrollment period for Medicare plans begins Oct. 15 and ends Dec. 7. Seniors can shop — online at Medicare.gov or call Medicare’s information line, 1-800-633-4227 — for drug plans or Medicare Advantage policies. These plans are not available through the marketplaces, even though they may be sold and advertised by the same insurance companies that are selling products on the exchanges. Officials acknowledge that it may be easy to mix them up.

“Make sure that you’re reviewing Medicare plans and not Marketplace options,” advises the “Medicare & the Marketplace” website.

The law prohibiting the sale of private health insurance to Medicare beneficiaries, enacted about 20 years ago, was originally intended as a safeguard to prevent Medicare beneficiaries from buying coverage they didn’t need because it duplicated what they already had, said Bonnie Burns, training and policy specialist at California Health Advocates.

Despite the ban, there is nothing in the health law preventing people with Medicare from buying marketplace coverage, said Juliette Cubanski of the Kaiser Family Foundation. (Kaiser Health News is an editorially independent program of KFF.)

Selling Marketplace Plans To Medicare Beneficiaries Will Be Illegal