It’s a Wednesday night in Boston, and Amy O’Leary is out at Fenway enjoying a Red Sox game and hoping for another year like 2007. That’s when the team won the World Series, sweeping the Colorado Rockies in four games. 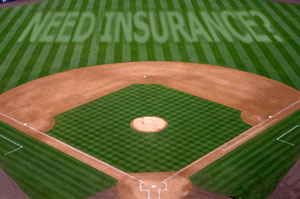 It’s also the year that Massachusetts started requiring nearly all residents to have health insurance — and the Red Sox helped to get the word out about it. They let the state set up booths at games to explain the new law to fans, and the Massachusetts Health Connector ran ads on Red Sox broadcast networks.

O’Leary remembers it well. “I think it made sense. People feel like they know the players,” she says. “I think that sports teams in general can be messengers of good information to a wide variety of people.”

“People who care about being healthy, our young adult population, are big watchers of the sports shows, and we know are going to be an important population for us to reach,” Kim says.

Colorado is targeting young people — many of whom are uninsured — to help balance the insurance pool under the Affordable Care Act. Young people generally use fewer health services so their premiums will help the insurance companies cover the medical needs of older, sicker beneficiaries.

So the state is running television ads during Rockies baseball games that show people buying a health policy and then celebrating as if they’d just won sporting event. The voiceover in the ads says, “Connect for Health Colorado, because when health insurance companies compete, there’s only one winner: You.”

But while Colorado follows Massachusetts’ lead on advertising its new insurance marketplace, it is one of only 15 states independently setting up its own exchange. The federal government is fully or partially at the helm of the insurance exchanges in all the other states.

Mandy Cohen, with the federal Department of Health and Human Services, says it can be tough to reach young people who may not currently value having health insurance.

“We also know that they’re most heavily marketed to, so it’s really hard to break through to this group,” Cohen says. “We know we had to put an extra emphasis on the 18-to-35 year old cohort.”

But when the White House reached out to pro baseball, NASCAR and other sports organizations to discuss marketing partnerships, some Republicans called a foul. Senate Minority Leader Mitch McConnell sent the leagues a letter saying they, “risk damaging (their) inclusive and apolitical brand(s)” by promoting the federal health care law.

“We didn’t have negative feedback,” says Steinberg. “In American democracy we debate issues and we come to resolution and we pass laws. And those laws are designed to benefit the people. So when you can be a communicator of the laws of the land, you believe that you’re helping people.”

Still, the White House as of now has cancelled at least some of its meetings with sports leagues about potential partnerships.

In Colorado, the ads running during Rockies TV broadcasts haven’t stirred up any controversy. But they might not be home runs either.

The same night O’Leary was in Boston, Joan Ringel was at the Rockies game. She’s seen the ads on TV and says it’s kind of hard to even tell what they are selling.

“You wouldn’t know that that is Colorado’s exchange for the Affordable [Care] Act,” Ringel says. “I didn’t think they explained clearly that people need to pay attention to the exchange when it’s time to sign up.”

Open enrollment for Obamacare insurance starts in October — World Series time. The White House is hoping sports fans will also think of it as a chance to benefit from the Affordable Care Act.