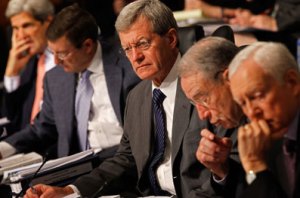 President Barack Obama and his congressional allies such as Senate Finance Committee Chairman Max Baucus have repeatedly vowed to “bend the curve” on health care costs, and Baucus’ new bill makes good on some of those promises.

It proposes new tools for attacking Medicare spending and imposes a hefty tax on high-cost health insurance plans  a levy designed not only to raise money to cover the uninsured, but also to discourage excessive spending on health care. But many health care experts and budget hawks say the legislation doesn’t go far enough in taming long-term costs in the nation’s $2.5 trillion health care system. And they worry that the cost-control measures included in the bill might get watered down or eliminated as the congressional debate continues.

“Baucus clearly cares about bending the cost curve, but his plan doesn’t do enough and the risk is that it gets watered down even more,” said Maya MacGuineas, president of the Committee for a Responsible Federal Budget, a government watchdog group. “The plan gets two thumbs up in going further than any of the other plans, but it just shows you how big the challenge is that it doesn’t go nearly far enough — especially with this aggressive effort to expand insurance coverage.”

Princeton University economist Uwe Reinhardt agrees. “All of the bills that have emerged from Congress have had only very weak gestures toward cost control,” he said, adding, “The Baucus bill is no exception.”

Their view isn’t unanimous. Mark McClellan, a former administrator of the Centers for Medicare and Medicaid Services and now director of the Engelberg Center for Health Care Reform at The Brookings Institution, said “I think they do have a substantial amount of delivery reform” in the Finance bill.

He pointed to the bill’s proposal to create an independent Medicare commission to make recommendations to Congress on saving money, as well as a new CMS “innovations center” to test ways to make health care more efficient. He also noted there are several pilot projects to experiment with ways to save money. The tax on high-cost health insurance plans would also reduce costs, he said. “You can see the savings grow a lot over time.” The provision would raise revenue and encourage people to pick less generous health insurance plans, McClellan said.

The measure also includes other provisions to reduce health care costs. For example, the bill would create a program that would link a percentage of Medicare payments to hospitals to the quality of care provided on a set of specific conditions, such as cardiac, surgical and pneumonia care. The measure would require physicians to report on a series of quality measures or face a cut in payments. The Finance bill also creates a voluntary pilot program to encourage hospitals, doctors and other health care providers to collaborate and improve patient health care in the Medicare program and share in the savings of coordinating care.

While the Congressional Budget Office is reluctant to score substantial savings on some of the provisions, McClellan said, “I think there’s a lot of potential for a big impact on health care costs.”

As the Finance Committee got down to work on the $774 billion 10-year Baucus bill Tuesday, the chairman offered some changes in his proposal. To appease concerns of his Democratic colleagues, Baucus raised the thresholds for plans for workers with high-risk jobs and for non-Medicare retirees age 55 and higher  a concession to unionized workers who feared their health plans would be taxed.

Baucus’ original proposal would have compelled insurers to pay taxes on policies with annual premiums of $8,000 for individuals and $21,000 for families. His revised version raised the thresholds for individuals by $750 and for families by $2,000 for those with high risk jobs or retirees 55 and higher who are not eligible for Medicare.

He also raised the tax, which would be levied on insurers and plan administrators, from 35 to 40 percent. In addition, under his new plan, Baucus would index the level that plans would be taxed in the future to the consumer price index plus one percent; that was designed to ease fears that more and more middle-income workers would get hit by the tax over time. But some lawmakers may want those thresholds raised even higher and broadened to apply to more workers.

‘A lot of musical chairs?’

It’s not clear any tax on high-cost policies will survive, considering opposition in the House. And other provisions to slow the long-term rise in costs face skepticism-if not downright opposition.

For example, there has been concern among some lawmakers and patient groups that comparative effectiveness research, which tries to determine which medicines, medical devices or procedures work best at treating specific ailments, might be used to limit access to certain treatments. In addition, some members of Congress fear that the Medicare panel that Baucus envisions would have too much power to impose spending reductions. These lawmakers want to maintain their authority over reimbursements to hospitals, physicians and other health care providers.

If the bill’s Medicare commission is weakened, it’s projected $23 billion in savings from 2015-2019 could be reduced. Even in its current form, the commission would be barred from changing Medicare benefits or eligibility rules and Congress could vote to reject its proposals.

Other, more traditional ways to reduce the legislation’s costs also face some opposition. For example, the insurance industry is beginning to step up its protests of Baucus’ plans to reduce payments to Medicare Advantage plans  the private-plan part of Medicare  by about $123 billion over the next 10 years. And powerful trade groups, such as the Advanced Medical Technology Association or AdvaMed, are lobbying hard to stop proposed new fees on their industry. The Baucus plan would impose $ 4 billion in annual fees on medical-device manufacturers over the next decade but on Tuesday he proposed exempting retail products from the fee.

“Nobody has ideas that are going to fly off the page and go into effect very quickly that are really going to reduce total health spending as opposed to shifting it around so the federal cost is lower,” said Joe Antos of the conservative American Enterprise Institute. “In the end we’re going to see a lot of musical chairs on spending for whatever final bill comes out.”