In an effort to curb abuse of powerful painkillers, Massachusetts’s largest insurer is going to restrict doctors’ ability to write new prescriptions to 30 days’ worth of pills before a mandatory review by the insurer. 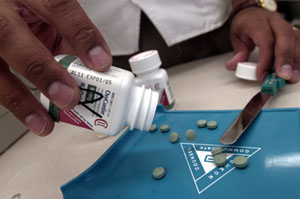 Officials at Blue Cross Blue Shield of Massachusetts say the policy, which begins July 1, will prevent doctors from prescribing 60 days of a painkiller such as OxyContin, for example, for a minor problem such as a sprained ankle. Patients with such serious or chronic conditions as cancer or those who are terminally ill will be permitted to continue to receive opioid painkillers.

By limiting the drugs, the insurer hopes to reduce the risk of addiction and also to keep the drugs from teenagers and others for whom they weren’t prescribed. BCBS of Massachusetts is believed to be the first insurer in the nation to adopt this approach for doctors who treat patients for pain.

“We want to give patients an adequate supply, but not so many that it causes a problem,” says John Fallon, chief physician executive at BCBS of Massachusetts.

The insurer says roughly 10 percent of its members – more than 30,000 people – have received painkiller prescriptions lasting longer than 30 days.

Under the new policy, doctors can prescribe one 15-day prescription and one 15-day refill before a review is required. “If you’re going to have more than a 30-day supply, there needs to be dialogue with the patient about the risks of addiction,” Fallon says.

The painkillers in question include such well-known opioids as Vicodin, Percocet and OxyContin. (Opioids are natural or synthetic versions of opium, derived from the opium poppy.) In 2008, 14,800 Americans died from prescription painkiller overdoses, more than the total for cocaine and heroin combined, according to the Centers for Disease Control and Prevention. In 2010, an estimated 5.1 million people used prescription pain relievers for nonmedical reasons in the preceding month, according to a survey by the federal Substance Abuse and Mental Health Services Administration. More than half said they got them for free from friends or family members.

While agreeing that it’s important to address prescription painkiller abuse and misuse, some physicians and patient advocates say they’re concerned that the new policy will make it even tougher for patients with chronic pain – about a third of U.S. adults, according to a survey by the American Pain Society. They point out that many of these patients already find it difficult get the full range of services they need. Physicial therapy, for example, is often not adequately covered by insurance, and physicians frequently lack extemsive training in pain management.

“Addressing one component of therapy without addressing the whole is not good medicine, nor good policy,” says Perry Fine, a professor of anesthesiology at the University of Utah School of Medicine’s Pain Research Center.

Under the new policy at BCBS of Massachusetts, doctors must attest that they’ve taken certain steps before prescriptions beyond 30 days will be authorized. These include the development of a treatment plan, patient education about the drug’s benefits and risks, written agreements – sometimes called “pain contracts” – about proper drug use, and identification of a single prescriber and pharmacy to avoid so-called doctor shopping.

Some primary-care physicians who already incorporate pain contracts and patient education say they have a different problem with the policy: They say the bureaucratic process of getting approval when a patient needs more than 30 days of painkillers will cut into their already limited patient time.

“It creates a lot more work,” says Laura Knobel, a primary-care physician with a solo practice in Walpole, Mass. Prior authorization for an MRI scan, for example, can take 15 minutes if a patient’s circumstances don’t fall neatly under recommended guidelines, she says. “You’re spending time on the phone or online rather than taking care of patients.”

A few states are moving toward restricting the prescribing of pain medication. In Washington state, for example, chronic pain patients must consult a pain specialist if their medication dose exceeds the morphine equivalent of 120 milligrams per day, says Jim McLaughlin, a staff attorney at the state health department’s Medical Quality Assurance Commission. Among other things, the regulations also require doctors to inform patients of the risks and benefits of prescription painkillers and require written agreements in some instances.

With their “artificial” limits, policies such as those in Washington state and Massachusetts “fail to take into account individual situations,” says Jennifer Jaff, executive director of a nonprofit group called Advocacy for Patients with Chronic Illness, who herself has Crohn’s disease, an inflammatory bowel disease that can cause severe abdominal pain.

In addition, many doctors have already instituted practices to control drug abuse, such as requiring urine samples and pain contracts, she says. “I don’t think there’s a need for insurance companies to put in even more controls.”