When a ferry crashed in lower Manhattan earlier this month, ambulances took dozens of people to hospitals around Manhattan. Bellevue Hospital took in 31 passengers who all had minor injuries. Despite their bruises and bandages, something was missing: the most seriously hurt patients from the crash. Dr. Suzi Vassallo said that’s because Bellevue currently can’t handle serious traumatic injuries. Hurricane Sandy closed Bellevue, and it re-opened in December, but doing only partial duty.

“We don’t have an operating room yet,” Vassallo said. “And you always have to have that kind of backup for any critical trauma.” 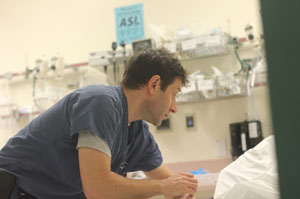 Officials hope to restore full service by early February. Providing limited service in the emergency room, while also repairing much of the infrastructure, has forced Bellevue to improvise, and has taught both the medical and physical plant staff new things about operating a large urban hospital.

Vassallo is standing in the emergency room on a quiet weekday morning as patients file in with flu symptoms. For the moment, Bellevue doesn’t have an “upstairs” where it can send patients for surgery or keep them overnight for observation. Ambulances don’t bring the most serious cases here, and when people walk in the door who might be suffering a heart attack or a stroke, doctors and nurses stabilize them and then send them to a more full-service facility.

Recently, Dr. William Goldberg arrived at his ER shift and found that a stabbing victim had come in and been transferred to another hospital.

“He was probably fine, but because we don’t have the resources we normally have, they basically packed him up and shipped him over to Cornell,” Goldberg said, referring to New York-Presbyterian’s Weill Cornell Medical Center, the area’s only other trauma center. Bellevue was one of only three Level 1 trauma centers in all of Manhattan.

It’s a point of pride among staffers that Bellevue usually takes all comers–whether they have a bad stomach ache or a gunshot wound. Goldberg says not being at full capacity, even temporarily, stings a little.

“It’s frustrating for us,” he said, “because we want to do everything that we’re trained to do, and when you can’t, you feel a little disabled.”

To operate on patients, to house them overnight, to monitor them in the intensive care unit, or to deliver their babies, hospitals need rock-solid electrical and fuel systems. They need heating and cooling. They need pumps to move water and fuel—and elevators to move people—up and down the 22-story complex. 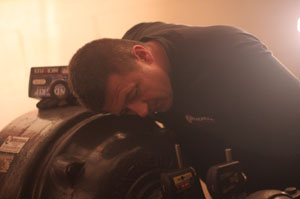 Robert Sudo, a mechanic for a local electrical firm, adjusts the motor of a powerful water pump at Bellevue that was knocked out by flooding (Photo by Fred Mogul/WNYC).

All of these were lost for Bellevue in Hurricane Sandy.

Hundreds of people are working to restore the historic institution’s systems. One of the people in charge, Chief Engineer Patrick O’Brien, gave a tour of the basement, where the problems started.

Flooding wrecked the water pump motors, leaving the hospital no way to replenish four 55,000-gallon rooftop towers that supply water to the complex. Only one of the four pumps has been restored—enough to get things going, pending a longer-term solution. Eventually, a new system will place two pumps on the second floor, presumably out of harm’s way from flooding.

The room with the fuel pump had a heavy steel-and-rubber “submarine door,” so that even in the event of a flood, the fuel pumps could still send oil up to the backup generators on the 13th floor and keep the hospital running. But when Sandy came, these pump motors also got soaked and failed.

“We’re not really sure where the water came in,” O’Brien said. “We have a lot of penetrations.” Those include fuel lines, electric lines, a sewage line and a general lack of sealing among the aging cinder blocks.

Reconstruction is costing hundreds of millions of dollars and has proved to be a series of compromises between what can be done now and what will have to wait for later. While some large systems are being moved out of the basement to higher ground, others, such as the air handlers that cool and heat the buildings, will stay put—and could be damaged in the next storm.

“At some point, you have to just make priorities, you just can’t move every single thing, it’s just not feasible,” O’Brien says.

Bellevue’s reopening will be welcomed by other nearby hospitals, which have seen their emergency rooms slammed by flu season.  At New York-Presbyterian’s Cornell campus, CEO Dr. Steven Corwin says twice the usual number of trauma patients are coming into the ER, putting a strain on the hospital during emergencies. Take a serious car accident. “You could be talking about 10 or 15 doctors, allied health personnel, in a trauma room, to stabilize somebody to have multiple operations. So that’s a big burden on an emergency system, especially if you’re getting routine visits and influenza visits as well.” 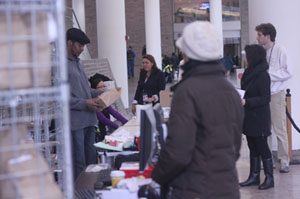 Patients visit a makeshift pharmacy at Bellevue. Many of Bellevue’s outpatient services are operating, but the not the pharmacy (Photo by Fred Mogul/WNYC).p>

Corwin said the increased ER patients were causing backups throughout the hospital. Instead of the four-to six-hours that these patients normally wait for an inpatient bed, or the 10-hour-wait during the busier flu season, Corwin said, “We’re now seeing 12 or 13 hours to get a bed.”

Back at Bellevue, ER doctors say patients who otherwise might normally be held for observation are being discharged a little more readily—since there’s no place to keep them overnight. Many of these are low-income patients with relatively minor symptoms who come to the ER repeatedly for problems with their diabetes, high blood pressure or mental illness medication. Dr. Rajneesh Gulati says Sandy has forced Bellevue to do a better job getting them follow-up care—and has consequently accelerated an important trend in hospital care.

“Where in the past we might’ve had to wait two to three days for a routine follow-up, we’re trying to organize our primary care clinics, and get patients emergency access,” Gulati said. “Many of the patients I would’ve leaned toward admitting [for overnight stays], I can now safely discharge, knowing they have follow-up in the morning.”

Increasingly, Gulati said, this is the future, as hospitals get more and more pressure from the government to treat patients not in emergency rooms, but instead in clinics, where health officials say they will get better care at a lower cost.

“A good number of our patients visit the emergency room because they have no ability to find primary care,” he said. “As people get primary care, we hope they will be less sick and won’t have to visit the hospital as much.”

This story is part of a collaboration with NPR, WNYC and Kaiser Health News.

Manhattan’s Bellevue Hospital Is Back, But Changed After Sandy