More than two and a half years after he signed the most far reaching health care legislation into law, President Barack Obama showed in his Wednesday debate with Mitt Romney that explaining the law is still no easy job. 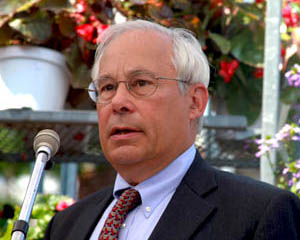 “It’s a great law and complex and complicated … but there is a continuing job to communicate how it works,”  Don Berwick, Obama’s former administrator of the Centers for Medicare and Medicaid Services, said Thursday after a health briefing at the Newseum in Washington.

Berwick was not critical of the president’s performance but said it was good there are still two more debates this month.

Berwick said Obama faces challenges to explain the law accurately when Romney repeatedly falsely asserts that they Affordable Care Act will take away $716 billion from Medicare beneficiaries. The law reduces the growth in funding to the program partly because the hospital industry agreed to cuts because they would have fewer uninsured patients after 2014. Other cuts would come from reducing funding to Medicare Advantage health plans.

In a talk sponsored by the news organization Politico Pro, Berwick and other experts said accountable care organizations — new types of health systems that are promoted by the health law—would continue regardless of who wins the election. “Both sides endorse ACOs because it’s a good policy,” Berwick said. In an ACO, groups of hospitals and doctors are paid a set amount of money to care for patients and get to share in the savings if they can reduce costs while improving quality.

Berwick said the potential savings from ACOs — made possible because care will be better coordinated—will help make more funding available for education and other community needs.

Robert Laszewski, a health care consultant and former insurance executive, said both political parties embrace ACOs because they don’t limit patient choice of doctors as HMOs do. But he cautioned ACOs may not save money quickly enough to control the rising cost of Medicare. “We don’t have a lot of time,” he said.

Karen Ignagni, president of America’s Health Insurance Plans, also said she saw ACOs continuing no matter what happens politically. “I don’t think it has anything to do with the political dynamic,” Ignagni said. “It has everything to do with what employers are telling health plans and their providers [about costs]. They can’t afford it.”