Today is Donald Berwick’s last day as administrator of the Centers for Medicare & Medicaid Services.

Berwick, 65, a pediatrician, Harvard professor and well-known quality improvement expert, has served since July 2010. President Barack Obama named Dr. Berwick through a recess appointment after it was clear that Senate Republicans would not vote to confirm him. They said that Berwick’s 2008 praise of the British health care system was akin to endorsing government-run health care which would include rationing.

Under Berwick, CMS developed a large number of complex, and sometimes controversial, rules implementing last year’s health reform law. While some rules have received mixed reviews, Berwick generally won praise from industry leaders and consumer advocates. But congressional Republicans criticized him as a symbol of what they see as the Obama administration’s overly-aggressive intervention in the nation’s health care system.

Marilyn Tavenner, previously the number two person at the agency and the former health secretary of Virginia will now run the agency.

1. Made CMS less bureaucratic and more responsive.
Berwick conducted the first-ever training to encourage continuous performance improvement throughout the 5,400-employee agency. He sought to shift the agency culture toward teamwork, innovation, speed, and customer focus. Many staffers say they’ve been energized and are working to get information out faster to patients and to states, though some complain this work takes up too much of their time.

Berwick also has encouraged staffers to get out into the field more to talk to patients and providers, which staffers say has been valuable in making policy. Industry experts say CMS has become more open to outside input and is moving faster to make recommended policy changes that formerly took years.

2. Made CMS a force for U.S. health improvement.
CMS traditionally has focused on administering health care payment policies. But Berwick had broader goals – what he dubbed the “Triple Aim” to achieve better public health, higher-quality health care and reduced costs. So, he led the drafting of a first-ever mission statement calling for the agency to be a force for the continual improvement of health and health care for all Americans.

3. Pushed hospitals to improve patient safety.
In April, CMS announced a quintessential Berwick initiative, the $1 billion “Partnership for Patients” to improve post-hospitalization care. It will test models for reducing nine types of medical errors, including surgical infections, pressure ulcers and complications from childbirth. The Partnership is patterned on national campaigns Berwick previously led – as chief of the Institute for Healthcare Improvement – to encourage evidence-based clinical practice. The program will award grants to partnerships of hospitals and community-based organizations with the goal of reducing hospital-acquired preventable conditions by 40 percent — and saving 60,000 lives — over the next three years.

4. Started to move Medicare from paying by the procedure to paying based on outcomes.
In October, CMS unveiled a final rule for a new Medicare demonstration program which advances accountable care organizations. ACOs are designed to encourage hospitals and physicians to cooperate to provide better, more seamless and less expensive patient care. If they succeed in delivering quality care for less money, they will share the savings with Medicare.

The preliminary ACO shared-savings rule was sharply criticized as unworkable. But Berwick and his staff won praise from provider groups for producing a final rule that is more likely to get them to participate. Still, many say the projected Medicare savings of less than $1 billion over three years are too small to be significant.

5. Encouraged “innovative” health care delivery models.
The CMS efforts closest to Berwick’s heart are innovative programs to improve patient safety and the delivery of care, especially for patients with multiple, chronic conditions. The establishment and testing of these demonstration models for better care was funded by the new Center for Medicare and Medicaid Innovation, which Berwick set up with $10 billion authorized under the health law. Berwick recruited a respected director, Dr. Richard Gilfillan, from the health insurance industry. 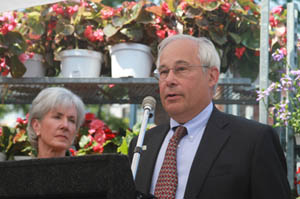 While some experts are optimistic that lessons learned from these projects will keep patients healthier and save billions of dollars, others say bigger savings are needed faster, and that the history of Medicare demonstration projects leading to effective system reform is not impressive.

Berwick also launched a project to train and deploy 200 “innovation advisers” in health care facilities around the country. These part-time quality mentors — who already work as clinicians or administrators and who will be paid up to $20,000 for one year of service — will spearhead improvement projects in their institutions and communities. They are to be selected from a field of applicants this month.