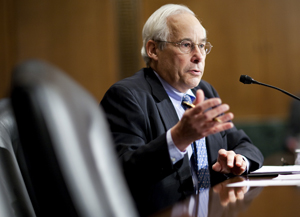 Dr. Donald Berwick, administrator of the Centers for Medicare and Medicaid Services, testifies to the Senate Finance Committee on Wednesday. (Joshua Roberts/Bloomberg via Getty Images)

In his first appearance before a congressional committee since becoming administrator of the Centers for Medicare and Medicaid Services, Dr. Donald Berwick told the Senate Finance Committee that the health law would help make the delivery of medical care more efficient and reduce its cost.

Republicans voiced concerns about several aspects of the law, including its reduction in payments to private Medicare plans, known as Medicare Advantage. Republicans also said that the hearing, which lasted just over an hour, did not give them enough time for them to question Berwick.

Kaiser Health News posted an advance copy of his prepared statement, and also has a resource guide, which includes Berwick’s own words about the British health care system. KHN also has a summary of news coverage of today’s hearing.

Here is a transcript of Health on the Hill:

Jackie Judd: Good day, this is Health on the Hill. I’m Jackie Judd. The administrator of Medicare and Medicaid – Don Berwick – made his long-anticipated appearance before a congressional committee today. This was the first time he testified since being nominated and then, about four months ago, being appointed to the job by President Obama, while Congress was in recess.  Berwick went before the Senate Finance Committee and our Mary Agnes Carey was there. There was a lot of anticipation about this. What happened?

Mary Agnes Carey: Dr. Berwick opened the hearing by talking about his personal commitment and his lifelong career commitment to improving the quality of health care and making the health care system more efficient. He talked about things like improving the continuity of care, making it seamless, improving the quality of care delivered by Medicare and Medicaid and how he feels the new health law will help him do that. He also made it clear to the Finance Committee that he wants to talk to members, he wants to address their concerns. I think he really tried to strike a tone of openness with them.

Judd: Republicans were very anxious to have him up there to challenge him on certain parts of the health care reform law. Did that happen?

Carey: To some extent. The hearing was somewhat limited in length, it only lasted a little over an hour. Republicans did talk about the changes to Medicare, how they think this will hurt the Medicare program, in particular, changes to Medicare Advantage. Orrin Hatch, a Republican from Utah, talked about cuts to Medicare Advantage and how that disturbed him. There was concern that, due to the process by which Dr. Berwick was named  a recess appointment  that there wasn’t enough openness for his confirmation, that it should have come before the Senate committee. And they felt there simply wasn’t enough time today to address concerns about implementation of the health law and how CMS is going to allocate resources going forward.

Judd: Was there any indication that the Democrats deliberately kept this hearing short so that Dr. Berwick couldn’t come under attack from Republicans?

Carey: I asked Sen. Max Baucus, who heads the Finance Committee that very question. He explained to me that it was a scheduling issue today. Democrats are going to be in caucus meetings until 4:00. When this was raised by Republicans throughout the session, he said that there would be sufficient time for hearings with Dr. Berwick in the future.

Judd: Right after the midterm elections, President Obama said that he was willing to listen to any ideas Republicans might have about tinkering with the health care reform law if it really made it better. Was there any sense in Dr. Berwick’s comments today that he came to the Hill with that same attitude?

Carey: That’s definitely the message that he tried to send. He talked about how he’d met with many members individually, and he will continue to do that. There were some Republican members who said they had made inquiries to CMS about particular matters and [who] weren’t getting any answers. He said: ‘If that’s a problem, I want to know about it and I want to fix it.’

There’s no doubt that the atmosphere around the health care law is politically charged, especially leading up to the 2012 elections. But I think that Dr. Berwick today tried to say ‘I want to work with you, I want to talk with you, and if you have a concern I want to know about it and I want to be responsive.’

Judd: And he is someone many of these lawmakers, including Republicans, have known for quite some time.

Carey: He is. He’s been well-known in the field of health care quality for years, and I think a lot of the messages he tried to send probably appeal to Republicans on many levels  trying to make health care more efficient, make it cost less, have the federal health care programs be more efficient and cost less. These are all goals that are shared by many people in both parties, but the politics around this sometimes makes it difficult to see areas where they agree.

Judd: Thanks so much. Mary Agnes Carey, reporting to us from Capitol Hill.