RALEIGH, N.C. — When Lauren Heath learned she had to spend an extra day in Rex Hospital after delivering her baby girl in May, she wasn’t complaining. 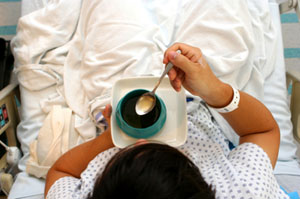 Instead of mystery meat and Jell-O, she enjoyed banana-nut pancakes, Caribbean grilled chicken salad, Philly-style cheesesteaks, orzo salad and baked potato wedges. With an extra day’s stay, she was looking forward to trying the hospital’s lime and ginger-glazed salmon. The food was so good that even her out-of-town mom decided to have her meals brought from the hospital cafeteria.

Rex, part of the University of North Carolina Health System, is one of a growing number of hospitals nationwide that are tossing out their fryers and adopting hotel-style “room service” where patients can order food anytime from a large menu.  Many are also setting up gardens to grow their own vegetables, inviting local farmers to sell produce in their lobbies and turning food presentations into works of art — even when made puree style.

Here’s a sample of some of the new foods hospitals are offering:

Administrators say the focus on food has taken on extra importance since Medicare last year began paying them based partly on their patient satisfaction scores, a change that is part of the federal health care law known as Obamacare.

“Food service helps the overall experience,” said Jim McGrody, director of food and nutrition at Rex, as he inspected his kitchen cold room used for brining pickles, curing turkey pastrami and fermenting cabbage into sauerkraut. Several letters of praise from former patients hang in the kitchen.

While Medicare’s surveys do not ask about food, Rex administrators believe their culinary efforts help explain their better-than-average overall satisfaction rates. About 84 percent of Rex patients surveyed said they would recommend the hospital, compared to 71 percent nationally.

“I have no doubt that raising the culinary bar improves our customer satisfaction scores and elevates the overall patient experience,” said Chad T. Lefteris, vice president of operations at Rex.

Food management companies that specialize in health care facilities say they are getting more requests from hospitals looking to boost their satisfaction scores for Medicare. 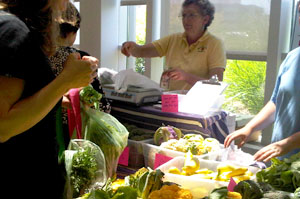 Hospitals are breaking from the traditional fare they typically offer by beefing up their presentations, setting up gardens to grow their own vegetables and even inviting local farmers to sell produce in their lobbies (Photo by Phil Galewitz/KHN).

“Health care reform is pushing a lot of these changes,” said Richard Schenkel, CEO of Unidine, a Boston-based company that manages food service at 20 hospitals. “There is a belief that when you have horrible food, it affects your patient satisfaction scores,” he said. “Patients remember their food.  … It’s the one thing that comes to them three times a day.”

The trend has meant that hospital food has become a specialty of its own — complete with its own version of “Iron Chef.” Rex won the top prize in last year’s culinary competition, sponsored by the Association of Healthcare Food Service. Five hospitals competed in June in New Orleans to make a dish under tight nutritional guidelines that cost under $7 to produce. The 2013 winner was Elmhurst Memorial Healthcare in Illinois.  Hospitals are also offering more choices to their patients. UNC Healthcare in Chapel Hill, N.C., offers a 20-page menu that looks like something you would see at Cheesecake Factory.  Patients can choose from standard fare such as cereal and eggs, as well as items such as gourmet burritos, red wine-marinated London broil with au jus and chicken Penang. The hospital has even created its own brands: Chinese selections are called Red Ginger; burritos are sold under the name Bandaleros; chicken and barbecue items fall under Carolina Chicken Co.

The 820-bed facility began using the extended menu last year, as well as room-service style food delivery so patients get what they want when they want it. Previously, they would select from one or two entrees and the food would be delivered to everyone at the same time. That meant many patients got cold food, or food they simply didn’t want. Today, all the food orders are tracked by bar codes much the way hospitals track medications.

Food costs at the hospital fell by $400,000 in the first year of its “restaurant delivery” system because items not served to patients during peak meal periods are sent to hospital cafeterias to avoid waste.

“It’s been a game changer for us,” said Angelo Mojica, director of food and nutrition services at UNC. He said patient satisfaction scores, which he tracks every day on a television monitor in the kitchen, have soared to 99 percentile. He parses those ratings by hospital floor and even by type of room — private or semi-private. Like doctors, food service managers, including Mojica, make daily “rounds” to talk to patients about their dining needs and preferences.

Patients call in their orders and speak to a food service representative located just off the main kitchen who ensures they stay within dietary restrictions, such as limited salt or calories. “A heart patient may get the fried chicken for lunch, but we tell them they may only get a salad for dinner,” he said.

At 11 a.m., just before the lunch rush is set to begin, Mojica is in the main kitchen to sample a well-done burger and chicken with pineapple and red pepper. A few minutes later, he heads upstairs to another kitchen, where he samples calzones stuffed with sausage and cooked-from-scratch chicken noodle and black bean soups.  As a worker nearby prepares balls of dough, Mojica tries the pizza. Next, he’s in the smaller cafeteria mainly used by staff to try a plate of Machaca — braised beef simmered in a chipotle broth. If he doesn’t like something, he tells his cooks to change it or pull it from the menu. Today, he gives everything a thumbs-up.

Behind the scenes, UNC has installed a sous-vide cooking system, often used in fine restaurants, which cooks food in airtight plastic submerged in water baths to ensure food are cooked to the exact temperature. The system speeds delivery service since food is partly cooked and chefs can finish it on a grill after an order is placed.

UNC also rolls its own sushi. It bakes and sells its own “lower fat” cookies — and includes directions to make them at home. And it sends new moms home with a fresh-cooked meal for the entire family.

Patients notice the difference. “I look forward to meals here and that’s the bottom line,” said Greg Vitak, 49, of Raleigh while in a bed at UNC fighting an infection. He was about to eat a pizza covered with pepperoni, onion and mushrooms.