Anne Koller was diagnosed with late-stage colon cancer in 2011 and has been fighting it since.

But it’s not just the cancer she’s fighting. It’s the bills.

“Think of those old horror flicks,” she says. “The swamp creature … comes out and is kind of oozy, and it oozes over everything.” 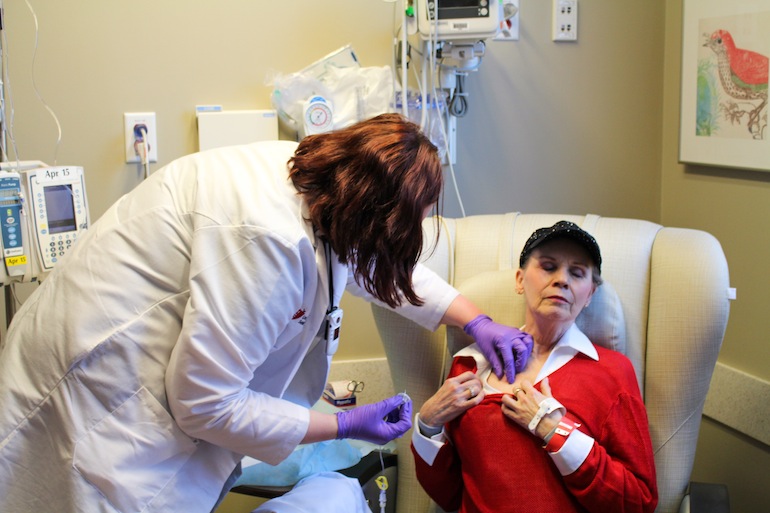 Anne Koller closes her eyes as an oncology nurse attaches an IV line of chemotherapy to a permanent port in her chest. Koller will spend 3 to 6 hours undergoing therapy (Photo by Sarah Jane Tribble/WCPN).

Koller, who lives in the Cleveland suburb of Strongsville, just turned 65 years old. She is petite and sports a stylish auburn wig. When she was able to work, Koller was in the corporate world and safely middle-class, with health insurance and plenty of savings.

But when she got sick, her high deductible health plan soon became a burden. And her monthly premiums kept increasing, reaching nearly double her mortgage payment. She soon found herself unable to keep up with the bills. They piled up.

“You start looking at these bills,” Koller says, “and, as much as you know it’s expensive, the shock itself is like, ‘What?'”

Her response was to begin asking her doctors about the cost of the treatments they recommended and whether there was a less expensive alternative.

Middle-income patients are — more than ever — feeling the pressure of that financial burden, says Dr. Neal Meropol, an oncologist at University Hospitals in Cleveland. He took over Koller’s care a couple of years ago.

“Patients are weighing this in their calculus now,” Meropol says.

He blames high-deductible health plans and soaring prices for a new generation of drug therapies that came onto the market in the late 1990s. 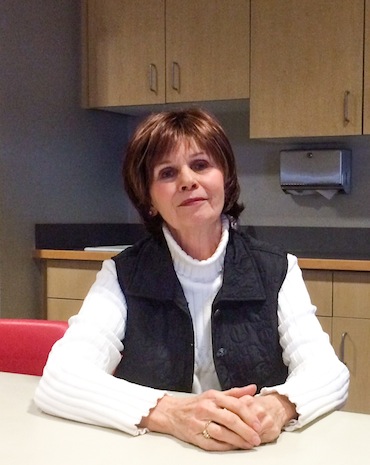 Anne Koller was diagnosed with Stage 3c colon cancer in 2011. She has been fighting cancer and the medical bills ever since (Photo by Sarah Jane Tribble/WCPN).

“We went from drugs that cost a few hundred dollars for a course of therapy that might be a month or six months or a year, to drugs that were costing $10,000 a month,” Meropol says.

Total cost of cancer care in the United States is projected to reach more than $150 billion by 2020, according to the National Cancer Institute. The U.S. Centers for Disease Control and Prevention released a study last year that found that, compared to people without a cancer diagnosis, cancer survivors are less likely to work and more likely to struggle financially. Another study, out of Washington state, found that the longer a cancer patient survived, the higher the rate of bankruptcy.

University of Chicago’s Dr. Jonas de Souza argues that it’s time for oncologists to begin considering the financial consequences as a real side effect to cancer care.

He and Meropol are part of a growing field of researchers studying the impact of costs for cancer patients.

Anne Koller will tell you cancer does cause financial stress.

“Here’s what happens,” Koller says. “I was talking about that swamp thing … but you know, OK, you go to collections. You end up with a court thing. I had been talking to the hospital, asking for help — nothing, nothing. Finally, they went to a sliding payment scale.”

Her credit is ruined. So she continues to drive an old car. Small expenses, like an Internet connection, are out of the question. And there are other challenges.

“Socially, things change a lot,” she says. “You talk to people and, if you dare, say, ‘God, you know, I can’t afford this,’ for instance.” And there is little money for niceties, she said. If someone suggests, “‘Let’s go out to lunch,’ on the day you can eat. You … think twice about it.”

Koller says she wishes more financial information had been given earlier in her treatments. She is now using the very last of her savings to pay bills — and, still, some are going unpaid.

This story is part of a reporting partnership that includes WCPN/Ideastream, NPR and Kaiser Health News.

Big Bills A Hidden Side Effect Of Cancer Treatment