MILFORD, Del. – When the only hospital in this southern Delaware town saw two of its four obstetricians move away, it knew it had to do something to ensure women in labor could always get immediate medical help. But recruiting doctors to the land of chicken farms and corn fields proved difficult.

So in late 2013, Bayhealth Milford Memorial Hospital shifted from using on-call doctors who came in as needed to a new model of maternity care that’s catching on nationally: It hired OB hospitalists, also called laborists, who are always at the hospital to handle births and obstetrical and gynecological emergencies. 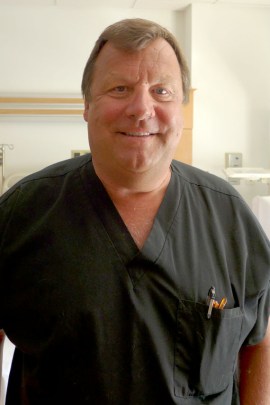 As a result, the two remaining obstetricians here no longer have to worry about being on call every other day because an obstetrician is always at the hospital.  “This gives my patients a safe passage for delivery,” said Dr. Albert French, 64, who has been delivering babies in Milford for 16 years.

But the change has also meant his patients sometimes may be delivered by a doctor they’ve never met before. “It’s a trade-off of familiarity for availability,” he said.

Milford is one of about 250 hospitals nationally that use OB hospitalists, up from 10 a decade ago, and several are adding the service each month, according to the Society of OB/GYN Hospitalists, a trade group. With the new model of care, private practice obstetricians typically still see their patients in the hospital, but they can also defer to, or work alongside, the laborist.

Despite concerns about turning the obstetrical specialty into “shift” work similar to emergency physicians, the laborist trend is growing as hospitals seek to improve patient safety and physicians increasingly recognize they need help responding to emergencies.

Some hospitals use laborists 24 hours a day, while others use them just nights and weekends. Some use community doctors to take 12- or 24-hour shifts as laborists. Other hospitals hire doctors as laborists who only work in the hospital and don’t have an office practice. Some, like Milford, use a hybrid approach.

Regardless of the laborist model, pregnant women like knowing a doctor – even one they don’t know — is there when they show up at the hospital rather than waiting 30 minutes or more for an on-call physician.

“I was very glad a doctor was here and I could just come right up to the labor and delivery floor,” Kelsey Katro, 27, said in early July while at Bon Secours St. Francis Hospital in Charleston, S.C., which adopted the model two years ago. 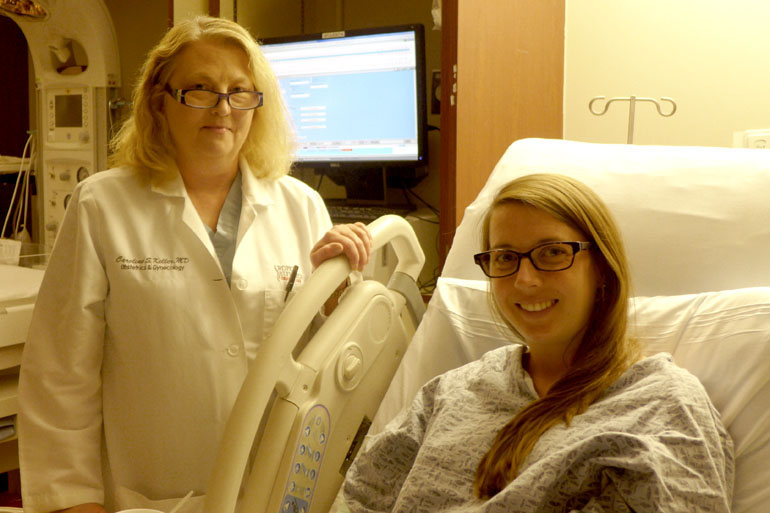 Kelsey Katro, patient, at Bon Secours St. Francis Hospital in Charleston, S.C. and Dr. Caroline Keller, a laborist at the hospital. Katro, who was 9 months pregnant, came in after thinking her labor had started. (Photo by Phil Galewitz/KHN)

Katro had come to the hospital when she thought her water had broken, signaling the start of labor. Tests, though, showed it had not, which relieved Katro since she had been scheduled for a cesarean section the following week in anticipation of a breech birth.

Doctors say problems in childbirth can occur so fast that having patients wait 20 minutes or more for a doctor can make the difference between a healthy baby and a mom or baby facing severe complications.

Dr. Caroline Keller, a laborist at St. Francis, gave Katro the news that she was fine to go home.  “Patients like knowing I’m just outside their door… it gives them comfort,” Keller said.  Nurses also like knowing a doctor is there so they can have help if mother or baby is in trouble, and doctors don’t have to leave a busy office at a moment’s notice. “It’s hard to walk out of the office with 10 pairs of eyes staring at you,” she said.

The laborist trend is being driven by several factors, among them hospitals striving to improve patient satisfaction rates and reduce their malpractice risk, and doctors wishing to work for a salary instead of running their own practice. Obstetricians, who are increasingly women, also want more time away from their practice and relief from treating an emergency patient who may lack insurance and often prenatal care.

“There has been a generational shift that modern physicians who come out of residency programs tend to want a better work-life balance and the hospitalist program allows doctors to have that so you can go home and have dinner with your family and not have to pay constant attention to the labor deck in the hospital afraid that something bad is happening,” said Dr. Kyle Garner, chief of obstetrics and gynecology at Sarasota Memorial Hospital in Florida.

“We’ve all had the 2 a.m. calls where the hospital needs you now and you have a 5- to 15-minute drive in to the hospital that’s a terrifying time for patients and the nurse can only tell the patient so many times ‘your doctor is on the way,’” he said.

At 3 a.m. in early July, Dr. Eleanor Oakman got a call from a nurse at St. Francis that one of her patients was ready to deliver—and she got to the hospital 19 minutes later. But she was 10 minutes too late. The laborist had delivered the baby. In the past, a nurse might have had to deliver the baby, which is not as ideal as having a doctor there, she said.

Despite some initial skittishness by community doctors, hospital officials from Washington state to Florida say the new maternity model is paying benefits. A study published in the American Journal of OB/GYNs showed the presence of full-time laborists reduced C-section rates at a Las Vegas hospital from 39 percent to 33 percent, saving money and reducing hospital stays.

Officials at Milford, St. Francis and Sarasota Memorial say they’ve seen an 8 to 10 percentage point drop in their C-section rates. Hospitals attribute the drop to laborists’ willingness to spend more time with patients in labor before opting for the surgical option.

Hospital officials also say use of laborists has also led to fewer early elective deliveries done before 39 weeks, which can put babies and mother at increased risk, the hospitals say.

But the model does have detractors, particularly from some older doctors who believe its anathema for an obstetrician to back away from delivering babies. “This is turning the OB/GYN into shift work no different from emergency medicine,” said Dr. Edward Yeomans, chairman of OB/GYN at Texas Tech University Health Sciences Center. “It goes against what I feel is the major calling of OB/GYN to be caring for their patients for months and years … I think the previous generation of OB/GYNs had more of a sense of obligation to be there for their patients no matter what.”

Yet, Yeomans said he sees little stopping the laborist movement since most doctors and women like it: “It’s like stepping out in front of a moving train.”

Indeed, hospitals are increasingly employing hospitalists to handle many other departments, from intensive care to medical-surgical floors. The laborist is part of this evolution, said Dr. Robert Pretzlaff, chief medical officer at Dignity Health, which has two hospitals in Las Vegas using laborists.

Hiring obstetricians to work full time in the hospital isn’t cheap. Sarasota Memorial says the initiative costs about $1.5 million a year to pay for doctors and their malpractice insurance. But with happier doctors and patients and a reduced chance of paying a multimillion dollar malpractice verdict, hospital officials say the cost is worth it.

“It’s a win, win, win for our patients, nurses and doctors,” said Sean Gregory, CEO of Health First’s Holmes Regional Medical Center in Melbourne, Fla. Laborists have helped reduce the wait for OB/GYN patients to be treated and released  from an average of four hours to two, he said.

HCA Inc., the nation’s largest for-profit hospital chain, says about 1 in 4 of its hospitals with maternity services use laborists. But few HCA hospitals have adopted the model the past five years partly because of some resistance from doctors who prefer to maintain continuity of care for their patients, the company said in a statement.

Dr. Brian Iriye, a maternal-fetal medicine specialist in Las Vegas who was the lead author of a study on laborists’ effect on C-sections, said the trend has also met resistance from doctors worried that laborists would steal their patients or not have the credentials to provide good care. “There always can be a lack of trust,” he said.

For French at Milford Hospital, the OB hospitalist model means he doesn’t have to be worried about having to provide emergency care while feeling sleepy or having to leave an office full of patients. “When I was young I could tolerate 80 hours a week and longer and managing the office. … One year I did 230 deliveries, but I was worried about being tired,” he said.

French, who still has a solo practice, works four, 24-hour shifts a month as an OB hospitalist to supplement the two full-time hospitalists hired by the hospital. “This model makes me want to keep practicing and makes me enjoy practicing at an older age when I would have quit sooner.”