A former GOP power player is urging Republicans to rethink their rejection of the health law and to implement state insurance exchanges – and to do it now. 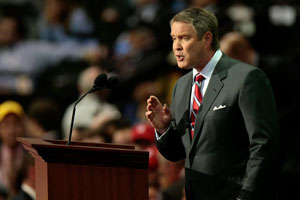 Bill Frist, a former Republican Senate majority leader and heart transplant surgeon, today argued in a column that state officials should not pass up the opportunity to build the insurance exchanges that are right for them. (Under the law, if a state that doesn’t create its own exchange, the federal government will parachute in to do the job).

“Originally a Republican idea, the state insurance exchanges mandated under the Affordable Care Act (ACA) will offer a menu of private insurance plans to pick and choose from, all with a required set of minimum benefits, to those without employer-sponsored health insurance,” wrote Frist, who is also a member of The Kaiser Family Foundation board. (KHN is an editorially independent project of the foundation.) “These exchanges are expected to bring health insurance to an additional 16 million Americans. Unlike the Medicaid expansion, these Americans will gain private insurance, and can choose the plan that’s right for them.”

Fifteen states have taken the first steps to set up exchanges, basically online insurance marketplaces. The health law has received withering criticism from many Republican governors, and some have refused to establish exchanges.  Some were waiting for a decision on the law from the Supreme Court, and are now moving forward. Still others are holding out hope that Republicans will win big in November and repeal the entire law.

But Frist, who isn’t a fan of the law’s insurance mandate, believes state-based exchanges are a good idea.

“State exchanges are the solution,” he wrote. “They represent the federalist ideal of states as ‘laboratories for democracy.’ We are seeing 50 states each designing a model that is right for them, empowered to take into account their individual cultures, politics, economies, and demographics. While much planning has yet to be done, we are already seeing a huge range in state models. I love the diversity and the innovation.”

Bill Frist To GOP Governors: Get Cracking On Exchanges