California’s Medicaid program made at least $4 billion in questionable payments to health insurers and medical providers over a four-year period because as many as 453,000 people were ineligible for the public benefits, according to a state audit released Tuesday.

In one case, the state paid a managed-care plan $383,635 to care for a person in Los Angeles County who had been dead for more than four years, according to California State Auditor Elaine Howle.

She said she found “pervasive discrepancies” in Medicaid enrollment in which state and county records didn’t match up from 2014 to 2017, leading to other errors that persisted for years. The bulk of the questionable payments, or $3 billion, went to health plans that contract with the state to care for 80 percent of enrollees in California’s Medicaid program, known as Medi-Cal.

The program for low-income residents is the nation’s largest and funded by both the federal and state governments. The state findings echo similar problems cited by federal officials and come at a time when the Trump administration has applied extra scrutiny to California’s spending on Medicaid.

In the report, the state auditor said it’s critical for the state to have accurate information on eligibility “because it pays managed care plans a monthly premium for an increasing number of Medi-Cal beneficiaries regardless of whether beneficiaries receive services.” 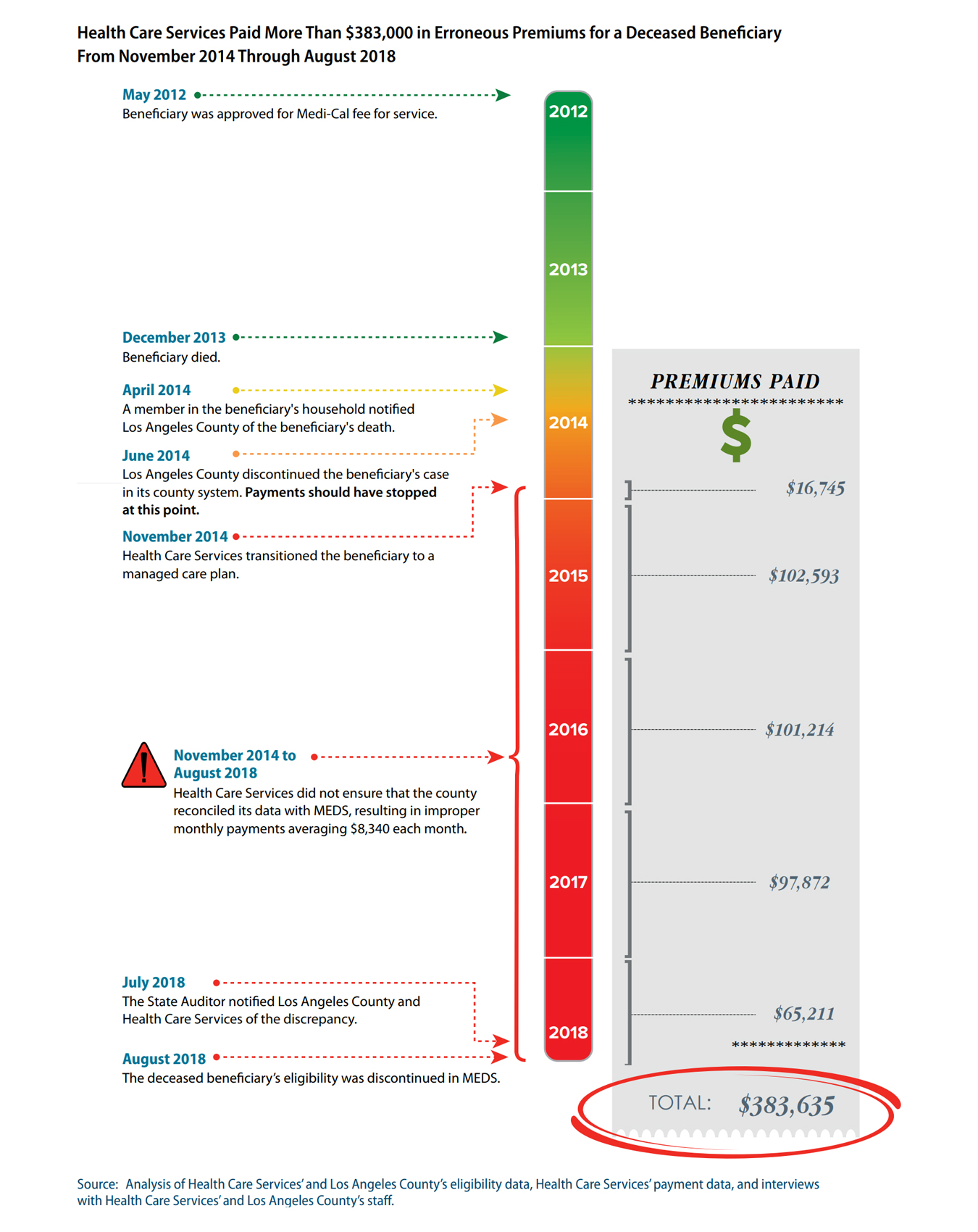 California paid a managed-care plan $383,635 to care for a person in Los Angeles County who had been dead for more than four years.

California’s Medicaid program has 13.2 million enrollees, covering about 1 in 3 residents. It has an annual budget of $107 billion, counting federal and state funds. Nearly 11 million of those enrollees are in managed care plans, in which insurers are paid a monthly fee per enrollee to coordinate care.

In the case of the dead patient, a family member had notified the county of the enrollee’s death in April 2014. However, the person’s name remained active in the state system, and California officials assigned the patient to a managed-care plan in November of that year.

From then on, the state kept making monthly payments of about $8,300 to the health plan until August 2018, shortly after the auditor alerted officials of the error. Auditors didn’t identify the health plan.

There also were costly mistakes in cases in which Medi-Cal pays doctors and hospitals directly for patient care – a program known as “fee for service.”

For instance, the state auditor found that Medi-Cal paid roughly $1 million in claims for a female patient in Los Angeles County from June 2016 to December 2017 even though the county office had determined in 2016 that she was ineligible.

In a written response to the auditor, the California Department of Health Care Services said it agreed with the findings and vowed to implement the auditor’s recommendations. However, the agency warned it may not meet the auditor’s timeline, which called for the main problems to be addressed by June 2019.

In a statement to California Healthline, the agency said it is implementing a quality control process and “where appropriate, DHCS will recover erroneous payments.”

Early on in 2014, as the ACA rolled out, the state struggled to clear a massive backlog of Medi-Cal applications, which reached about 900,000 at one point. There were widespread computer glitches and consumer complaints amid the increased workload at the county and state level.

In addition to questionable payments for care of ineligible enrollees, Howle and her audit team also discovered some patients who may have been denied benefits improperly. The state auditor identified more than 54,000 people who were deemed eligible by county officials but were not enrolled at the state level. As a result, those people may have had trouble getting medical care.

In February, a federal watchdog estimated that California had signed up 450,000 people under Medicaid expansion who may not have been eligible for coverage.

The inspector general at the U.S. Department of Health and Human Services said California made $1.15 billion in questionable payments during the six-month period it reviewed, from Oct. 1, 2014, to March 31, 2015.

In August, Seema Verma, administrator of the U.S. Centers for Medicare and Medicaid Services, told a U.S. Senate committee that she was closely tracking California to ensure the state “returns a significant amount of funding owed to the federal government related to the state’s Medicaid expansion.”

Verma expressed concern that states had overpaid managed-care plans during the initial years of Medicaid expansion, resulting in “significant profits for insurance companies.” By year’s end, she said she expects the federal government to recoup about $9.5 billion from California’s Medicaid program, covering overpayments from 2014 to 2016.

Tony Cava, a spokesman for Medi-Cal, said the state has already returned about $6.9 billion to the federal government and expects more than $2 billion more to be sent back by December.