After negotiating for months over how to overhaul Medicare’s troubled payment system for physicians, the bipartisan leadership of three Senate and House committees has reached a deal on the policy.  Their next task could be even harder – finding a way to finance repeal of the “doc fix,” the shorthand for the 1997 formula used to set physician payments, the sustainable growth rate (SGR). 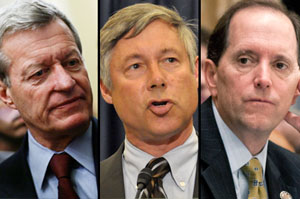 Under the legislation unveiled Thursday, doctors would receive an 0.5 percent bump for each of the next five years as Medicare transitions to a payment system designed to reward physicians based on the quality of care provided, rather than the quantity,  as the current payment formula does.

Focusing Medicare physician payments more on quality mirrors ongoing efforts in the private sector, some of the health law’s payment changes to hospitals and Medicaid efforts to improve medical care and lower costs.

“When you look at what’s happening around the country, a lot of private payers and Medicaid programs are moving away from fee-for-service into things like medical home payments and case-based payments for specialists and bundled payments and [accountable care organizations],” said Mark McClellan, a former Centers for Medicare & Medicaid Services administrator. “All of those kinds of things are what the legislation envisions as an alternative to fee-for-service.”  McClellan is now a senior fellow and director of the Health Care Innovation and Value Initiative at the Brookings Institution.

The package, sponsored by Republican and Democratic leaders of the Senate Finance and House Ways and Means and House Energy and Commerce panels, was unveiled shortly before the Senate confirmed Finance Chairman Max Baucus, D-Mont., to become the next U.S. ambassador to China. Baucus had made the SGR fix a top policy priority and had hoped to wrap up a deal before his departure.  For more than a decade Congress has struggled to find a permanent solution to the SGR, but has ended up passing temporary patches and punting the issue to the following year.

The idea of a bipartisan, bicameral agreement on health care amid the ongoing partisan fights over the Affordable Care Act is impressive. However, it is unclear if that same spirit of cooperation will remain as lawmakers take on the tough task of financing an SGR repeal.  For months, lawmakers and staff working on the issue said it was critical to get agreement first on the policy before trying to agree on offsets.  If lawmakers can’t agree on how to pay for the measure, a permanent fix might have to wait for another year.

The legislation does not include money for a package of Medicare policies – known as extenders — that fund therapy services, ambulance services and rural hospitals, as well as a program that allows low-income people to keep their Medicaid coverage as they transition into employment. The extenders were part of the package Senate Finance approved in December.  Those policies account for about $33 billion of the Finance’s $150 billion SGR overhaul package, according to the Congressional Budget Office.

Echoing the sentiments of his colleagues, in a statement Baucus said the bill “is the product of years of hard work” and he urged Congress to pass it.  Ways and Means Committee Chairman Dave Camp, R-Mich., said the measure would provide “stability for physicians so they will no longer face the uncertainty of massive cuts, but also begins the process of improving how we pay for medical care to focus on positive results for seniors.”

American Medical Association President Ardis Dee Hoven urged lawmakers to take action before the current SGR patch expires April 1.  “Congress has been debating the shortcoming of the SGR policy for more than decade. Continuing the cycle of short-term patches by merely addressing the 2014 cut that is imminent on April 1 without solving the underlying problem would be fiscally irresponsible and further undermine the Medicare program,” she said in a statement.

Among the provisions of the new system outlined by lawmakers are:

–Consolidation of three Medicare quality payment programs into one that rewards providers who meet performance thresholds, improves care for seniors and provides certainty for providers, according to a summary of the legislation.  It would also create a process to improve the accuracy of payments to doctors and other providers and would establish incentives for doctors to coordinate care for patients with chronic diseases.

–Voluntary alternative payment models that would provide a 5 percent bonus for physicians who choose to join. To qualify for that incentive, physicians would have to receive at least 25 percent of their Medicare revenue from these new models by 2018-19. That percentage would increase over time.

–A “Technical Advisory Committee” would review and recommend physician-developed alternative payment models based on “criteria developed through an open comment process.”   The deal also includes several measures to expand the use of Medicare data for transparency and quality.

Although physician groups have generally welcomed congressional efforts to swap the SGR for a value-based payment system, at least one analyst has raised concerns. In a recent blog post for Health Affairs, Jeff Goldsmith, president of Health Futures Inc. and an associate professor at the University of Virginia, said the measures before the congressional committees were “unsound health policy.”

“The proposed legislation cases in concrete an almost laughably complex and expensive clinical record-keeping regime, while preserving the very volume-enhancing features of fee-for-service payment that caused the SGR problem in the first place,” he wrote. “The cure is actually worse, and potentially more expensive, [than] the disease we have now.”

Finding A Way To Fund The Change

The cost of a permanent repeal has never been lower. The Congressional Budget Office’s most recent budget outlook estimated that simply holding Medicare physician payments at current rates – no increases but no cuts either — would cost about $115 billion over the next decade, far less than previous estimates. Adding a payment update to the doc fix package will increase the cost of the measure, as would adding back the extender policies.   Even with those additions, the bottom line would be much lower than CBO’s January 2012 estimate, which priced a doc fix repeal at $316 billion. CBO revised that in August 2012, to $245 billion.

As they have before, lawmakers could look to cut payments to Medicare providers – such as hospitals – but that would likely create a major pushback from the industry since those same providers took a payment reduction as part of the federal health law and then had their Medicare payments cut by 2 percent as part of the 2013 automatic federal budget cuts known as the sequester.  The recent budget deal extended those Medicare sequestration cuts for an additional two years, to 2023 from 2021.

Some Democrats have advocated taking money from the Overseas Contingency Operations fund, discretionary funding for the wars in Iraq and Afghanistan, to finance an SGR repeal but that’s a non-starter for Republicans.  The seniors group AARP recently suggested a series of offsets that involved the pharmaceutical industry, including changes to the Medicare Part D rebate program and reducing the market exclusivity period for biologics, but the pharmaceutical industry is likely to oppose those ideas, as would some lawmakers on Capitol Hill.

Other areas Congress could consider include making structural reforms to the Medicare program, such as combining Medicare’s Part A and B deductibles, raising cost-sharing or overhauling Medigap, the supplemental insurance program, to find savings. Other proposals include increasing the amount that higher-income beneficiaries pay for their Part B coverage or raising the current Medicare eligibility age. But facing a midterm election, lawmakers may be reluctant to embrace any of those ideas.

Consumer groups have raised concerns about shifting the cost to Medicare beneficiaries. “Since Medicare beneficiaries already pay for a portion of the annual provider payment increases through their Part B premiums, we ask Congress to reject proposals that unfairly ask America’s seniors to pay more,” Joyce Rogers, a senior vice president with AARP, said in a statement after the agreement was announced.

Lawmakers, especially Republicans, are expected to insist that any cost from the program be fully financed with cuts in other federal spending.