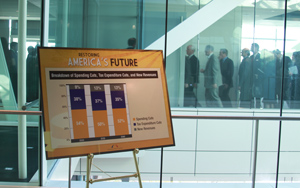 Offering the latest tough-love strategy to reduce the nation’s debt, a panel of high-profile Republicans and Democrats on Wednesday recommended that Medicare beneficiaries pick up far more of their health care costs and the government substantially curb the amount both Medicare and Medicaid programs can grow in future years.

The panel, led by former Republican Sen. Pete Domenici of New Mexico and Alice Rivlin, the budget director under President Bill Clinton, also calls for a national debt-reduction sales tax of 6.5 percent, as well as changes in Social Security and income tax rates.

The debt reduction task force was created by the Bipartisan Policy Center, established by former congressional leaders of both parties. Its recommendations come a week after the chairmen of President Barack Obama’s commission on controlling the national debt proposed increasing the age at which people qualify for Social Security to 68 by 2050. 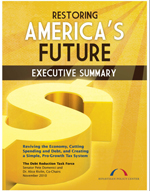 Backers of the latest plan said they hoped it would spur a reluctant public and elected leaders to grapple with painful choices needed to get the country’s spending under control. But others warned the political prospects of the plan seemed doubtful – particularly for some of the more far-reaching ideas, such as limiting the amount the government would spend on Medicare beneficiaries.

Right now, premiums account for 25 percent of the cost of Part B, or the physician component of the program, with the government paying the balance. The task force would increase beneficiaries’ share to 35 percent.

In addition, starting in 2018, traditional Medicare would be turned into a “premium support” program that would limit the rate of increase of federal spending per beneficiary to one percent above the growth rate of the economy. Under such a plan, beneficiaries likely would pay more to stay in traditional fee-for-service Medicare though they could save money by getting coverage though private health plans that would compete against each other for business.

“I think the premium support is a feasible way of controlling costs,” Rivlin said Wednesday at a press briefing.

But this approach has never drawn much political support over the years. “It’s hard to see either party embracing a full blown premium support plan,” said Henry Aaron, a Brookings Institution expert who helped develop the idea in the mid-1990s. “The Democrats would be largely against it because of cuts in benefits and not enough Republicans would have a stomach for it. It would mean big benefit cuts and a substantial increase in out of pockets costs.”

AARP Executive Vice President John Rother said his group would oppose premium support. Of the overall task force report, he said it “raises lots of questions because of how it shifts more costs to individuals.”

The task force also recommends slowing the growth rate of Medicaid, the joint state-federal program for the poor and disabled.  But the report did not provide any specifics other than saying the state and federal government should explore changing the way they split paying the cost of Medicaid.

In addition, the task force proposes phasing out by 2028 the tax exclusion on employer-provided health care benefits. The group also would eliminate the so-called Cadillac tax on high-cost plans, a provision of the new health law that takes effect in 2018. Taxing employee health benefits would generate about $10 trillion in savings by 2040, more than any other revenue generator, according to the report.

Labor unions have opposed eliminating the tax exemption on health benefits out of concern it would lead employers to provide stingier benefits, said Paul Ginsberg, president of the nonprofit Center for Studying Health System Change and a consultant to the task force.

Michael Cannon, a health policy expert at the libertarian Cato Institute, said the premium support change to Medicare would have greater ramifications than the ideas offered last week by the chairmen of Obama’s commission. Their report recommended increasing cost-sharing for Medicare beneficiaries, but didn’t specify an amount, and changing the way doctors and hospitals are paid to encourage more efficient care.

“You can fiddle with the price control formulas as much as you want, but the people whose incomes are determined by those formulas are probably going to carry the day,” Cannon said. He said the plan’s short-term political prospects were few.

* On Social Security, raise the amount of wages subject to payroll taxes  now $106,800 — so that 90 percent would be covered, and “slightly” reduce the growth in benefits for the top 25 percent of beneficiaries.

But the task force also veered sharply in the direction of reviving the economy and creating jobs with a recommendation for a payroll “tax holiday” in 2011 that would excuse employers and workers from paying the 12.4 percent tax into the Social Security Trust Fund.

Taking these and other steps, by 2020 federal spending would be reduced from a projected 26 percent of GDP to 23 percent, and the federal debt would be brought down below 60 percent of GDP, the task force said.