It’s been three years since Congress approved a nearly $30 billion plan to digitize health care records, yet much of the health care industry is still drowning in paper, a coalition of policymakers from the left and right said Friday.

The Bipartisan Policy Center released a 43-page report detailing the gaps in health IT implementation–the biggest concern being a delay in getting the various systems to be able to talk to one another. 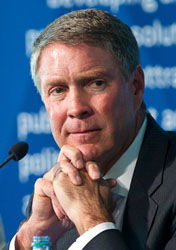 “Health information is fundamental to all the new models of care,” said former Sen. Bill Frist (R-Tenn.), a heart surgeon and co-chair of the Bipartisan Policy Center, a nonprofit research organization in Washington. “Data has got to flow seamlessly throughout this system.” (Frist is a member of the Kaiser Family Foundation’s Board of Trustees. Kaiser Health News is an editorially independent program of the Foundation.)

The government initiative, passed as part of the 2009 financial stimulus package, gives doctors, hospitals and other providers funding incentives to switch to digital record systems.  That effort is also considered one of the key elements to overhauling the country’s health care system. Proponents say that electronic records will reduce medical errors and help cut costs by reducing duplicative tests and care. It can also provide enhanced population data to find out the most effective procedures.

Part of that law, known as the HITECH Act, called for health care systems to be able to share patient information. But so far, the new report notes that “the level of electronic health information exchange is very low in the U.S.” The effort has been slowed, the report notes, partially because of federal delays in setting standards for how systems should be able to communicate with one another.

The report identified six barriers to successfully implementing the technology around the country and made recommendations in each of those areas. The barriers include privacy and security concerns, a lack of consumer engagement and the number of changes that providers are  juggling as a result of the health care law.  The  report suggest that doctors, hospitals and other providers might be more inclined to embrace the digital exchange of patient information  if they had a business incentive to do so.

The report notes that other causes of delays include a lack of enthusiasm among consumers, who often have misperceptions about how electronic records work and security concerns. Previous research, as the report highlights, shows that “health information exchange has a positive impact on both the cost and quality of care.”

“The patients aren’t the only winners when we deploy effective health IT,”  former Michigan Gov. John Engler said. “Digital technology can ensure that providers get promptly paid for their services.”