GREENVILLE, S.C. — Kristen Shorey gave birth to her second baby this summer in a marble-lined bathtub surrounded by LED candles and rested afterward on a queen-size mahogany bed. She received no pain killers, never saw a doctor and was home with her newborn son, Rowan, seven hours after birth.

It was nothing like the hospital experience where she had her first son two years ago, she said. In fact, the June birth wasn’t in a hospital at all but at the Greenville Midwifery Care & Birth Center.  She delivered with help from a midwife instead of an obstetrician. Shorey, 25, labored in a water-filled tub rather than a small bed while hooked up to intravenous tubes and a fetal heart monitor — her 27-year-old husband, Taylor, by her side.

“This was the most empowering experience of my life,” she said. 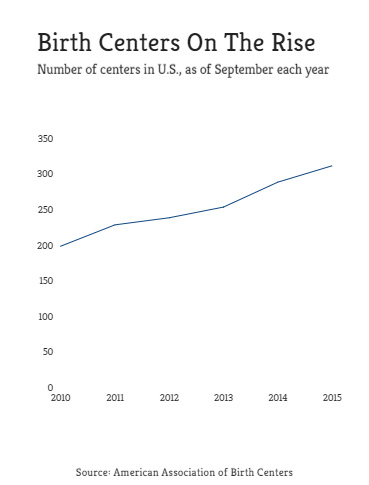 The upstate South Carolina facility is one of 313 birthing centers nationally and one of 113 opened since 2010, almost a 57% percent increase. It’s also among a small but growing number of centers owned or affiliated with hospitals.

There are nearly 4 million births a year in the U.S. and 98 percent still arrive in hospitals, but the increase in birth centers run by midwives has obstetricians, health insurers and hospitals taking notice. The number of babies born annually in birth centers has jumped 56 percent since 2007 to about 16,000, while total U.S. births have dropped nearly 10 percent in the same time, according to federal data.

The Affordable Care Act has played a role in their growth. The 2010 law required state Medicaid programs to pay birth centers a facility fee, in addition to paying the midwives. Since Medicaid pays for nearly half the births in the United States, the extra funding has made running centers more economically feasible.

Birth centers are covered by many insurers the same way a traditional hospital birth is covered. Since the length of the mom’s and baby’s stay in a birth center is so much shorter — hours instead of days – and does not involve doctors or anesthesia, the costs of a normal delivery are about half those in a hospital, birth center officials say.

They can be more economical for families, too, compared to hospitals, although how much depends on insurance coverage. Women who have health plans with high deductibles may save money at a birthing center, while others could have a health plan that will cover most of their hospital bills but not any services at a birth center. Yet cost advantage is not what most women that have used a birth center talk about.

They praise birthing centers’ peaceful environments, where they can absorb painful contractions by soaking in a warm bathtub, walking around a large room, or listening to music. They say they prefer the care of midwives who stay with them through labor and give them hours of personal attention rather than obstetricians who typically appear only near the moment of birth or if an emergency arises.

Shorey liked the post-birth services, too. She was able to stand up five minutes after having the baby in a tub. The next day, a midwife from the center came to her house to check on her and baby, then called her every day for a week. 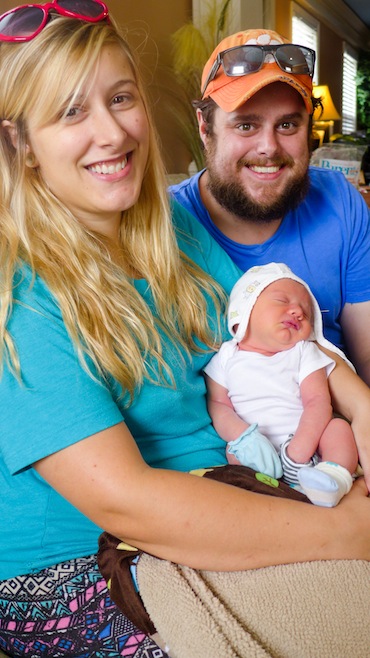 At Blessed Births, a birth center in Greenville, S.C., Kristen Laing, 25 and husband Harrison Laing, 29, from Greenville hold baby Elijah, about a week after he was born. The downtown center is owned and run by a certified professional midwife. (Photo by Phil Galewitz/KHN)

Birth centers are not places for complicated pregnancies, requiring costly services. They are intended for women with low-risk pregnancies who want to give birth under the care of midwives and without pain relievers such as epidurals. They exclude women with medical conditions such diabetes, high blood pressure before pregnancy, those having multiple babies or who are over 35. And they don’t do Cesarean sections.

Yet even sometimes for low-risk pregnancies, women want to hedge their bets. Dana Schrenk said when she chose the Baby + Co. birth center in Cary, N.C., it gave her peace of mind that the facility was only a few hundred feet from the WakeMed Cary hospital. Schrenk, who gave birth in September, was impressed when she first visited the birth center with its plush bedding, Bose sound systems, wood floors and big tubs. “It’s nicer than our house,” said Schrenk, 31. “I believe birth is a natural experience … and wanted a quieter, calm peaceful environment.”

Her husband agreed. “I never liked hospitals … it’s a place to go if you are sick or dying and I did not feel like that was the place to go to create life,” said Jon Ruth, 36.

WakeMed is a minority owner in the birth center, one of four owned by Baby + Co. that have opened in the past two years. The others are in or near Denver, Nashville, and Rogers, Ark. A fifth is planned in Charlotte in November.

Nationally, about 20 birthing centers are owned by or affiliated with hospitals. Eleven have opened since 2013. About half also are located on a separate floor or wing from the hospital’s regular labor and delivery department but the rest are in separate facilities away from the hospital.

South Carolina’s Greenville Health System chose the latter when it opened the Midwifery Care & Birth Center in June. Officials say they wanted to ensure women could have an out-of-hospital birth safely — with a hospital close by if they needed it. It’s done about 25 births in the first four months. 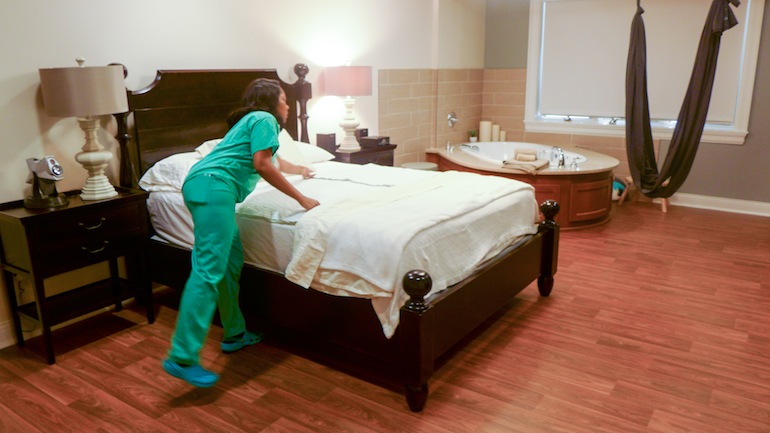 At the Greenville Health System Midwifery Care and Birth Center in Greenville, S.C., women get a plush king size bed, a giant tub and cloth swing to assist them with labor. The room has hardwood floors, mood lighting and high tech sound systems. The center is located in a medical park across the street from the main Greenville hospital. (Photo by Phil Galewitz/KHN)

Greenville Health began using midwives at its Greenville Memorial hospital in 2011. Adding the center in a medical office complex a quarter-mile away was a natural move to help women who did not want to give birth in a hospital. Hospital doctors were initially skeptical because “the traditional medical community has a long history of not working with or acknowledging the out-of-hospital birthing community,” said Dr. Donald “Chip” Wiper, an ob-gyn who helped set up the midwifery program.

The midwife at the other birth center in Greenville is suspicious of the hospital’s motives. “It’s all about the money,” said Amy Leland, who does more than 100 deliveries a year at Blessed Births, an older home that looks like a bed-and-breakfast. “They just want to grab market share.”

Dr. Amy Picklesimer, an ob-gyn at Greenville Health, rejects that assertion. She said the hospital birth center offers a safer alternative because the midwives have a working relationship with physicians and hospital staff.  “Childbirth can change very quickly and you can be high risk in an instant,” she said.

That’s only one consideration for mothers-to-be weighing how to choose a birth center or midwife. The education and training of midwives varies in the United States. Only about a third of birth centers are accredited by the Commission for the Accreditation of Birth Centers (CABC), which evaluates the facilities and sets national guidelines. State laws and regulations also vary. North Carolina has few rules, but South Carolina sets specific licensing requirements for birth centers that include they ensure all women see a doctor at least twice during pregnancy. 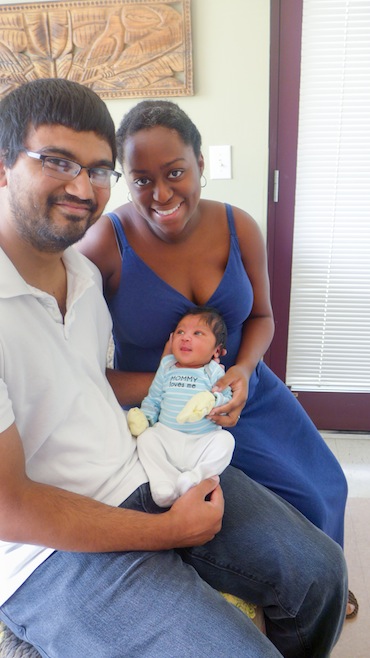 The American College of Obstetricians and Gynecologists supports using birth centers that are accredited and have certified nurse-midwives, who are licensed and professionally trained as registered nurses and midwives. Even with those caveats, the physician group says hospitals are still the safest place for women to give birth. It recommends birth centers have transfer agreements with nearby hospitals and consulting relationships with an obstetrician.

“There is no question that the site that gives mothers and children the best chance to be healthy is the hospital,” said Dr. Hal Lawrence, chief executive of the ob-gyn group. “Enabling women to have choices is a good thing as long as they know when they are the outside confines of a hospital, things can happen and a physician or midwives do not have resources or support to deal with them the same as in a hospital.”

Women with low-risk pregnancies are more likely to complete delivery without a C-section at a birth center than at a hospital, according to a study published in 2013 in the Journal of Midwifery and Women’s Health. About 12 percent of birth center mothers are transferred to hospitals during labor, most due to women seeking pain relief, the study reported.

Insurers are increasingly contracting with birth centers, though it’s easier for hospital-affiliated centers to get in those networks, said Kate Bauer, executive director of the American Association of Birth Centers, a trade group. “It’s not equal competition,” she said.

In an office building a mile from the University of North Carolina in Chapel Hill, Maureen Darcey has run a CABC-accredited birth center since 1996. She struggled for years to get insurers to include her center in their networks, but today she has most of them. The center’s midwives performed 500 births last year.

Early on Sept. 12, Nakita Noel and her husband, Farren, both 26, drove 40 minutes from Raleigh to reach Darcey’s birth center. Less than 25 minutes later, she gave birth to Cooper, her second child. The family went home eight hours after that.

Returning the next week for a checkup, Noel revisited the bright, airy birthing room with fond memories. ‘It’s just so nice here. I felt so much warmer and it was a more welcome space to have a baby in and to recover in.”

Said Darcey: “Having a baby at a birth center is like being at a home except it’s the midwife’s home.”