BISBEE, Ariz.  Mayor Jack Porter rode up to the sole post office here on a red motorcycle, wearing all black, his long hair tucked under a baseball cap. Getting off, he walked with a slight limp, the only lingering effect of a frightening morning last July when Porter awoke with numbness in his right side and slurred speech. 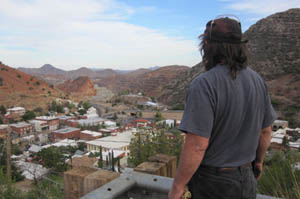 Bisbee, Ariz., Mayor Jack Porter looks over the town. The Copper Queen Hospital in Bisbee over the past four years has made a surplus of 5 to 10 percent, a margin much higher than rural hospital averages. But it is a success that officials fear won’t continue as Arizona reduces overall health spending by $500 million in 2012. (Photo by Jenny Gold/KHN)

The paramedics had rushed him to the only emergency room in town — Copper Queen Community Hospital. There, doctors determined he was having a stroke and gave him tPA, a clot-busting drug that, when administered within a tight timeframe, can minimize the effects of a stroke.

Rural hospitals in Arizona rarely give tPA because they don’t have stroke specialists; instead, they transfer patients immediately by helicopter to Tucson or Phoenix. But physicians at Copper Queen have a protocol that allows them to work with specialists remotely. So for Porter, that meant doctors 200 miles away at the Mayo Clinic in Scottsdale diagnosed his condition over a video link, allowing Copper Queen physicians to administer the drug on the spot, saving precious time.

“The right decisions were made and I’m alive and walking today. If things hadn’t gone well, I could have been another nursing home candidate,” says Porter.

Reaching out to specialists in Scottsdale and across the country is one way the hospital here is working hard to offer residents better care onsite. It’s also typical of the moves by Copper Queen’s CEO Jim Dickson that have transformed the nonprofit rural hospital with just 15 beds into an unusually successful business. Over the past four years, the hospital has made a surplus of 5 to 10 percent, a margin much higher than rural hospital averages. It is a success that Dickson and other hospital officials fear won’t continue as Arizona reduces overall health spending by $500 million in 2012. 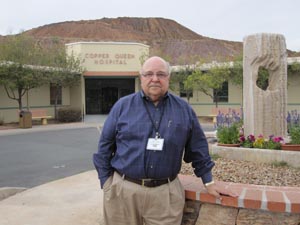 ?Making the hospital profitable here is tough. For about 100 years, Bisbee was a copper mining town. Scars and holes in the rock mark the spots where copper was once plentiful. But now the town of 5,500 people, just five miles from the Mexican border, has become a haven for hippies and tourists, the streets lined with art galleries and antique shops. People in the town and surrounding Cochise County tend to be low income and often suffer from chronic illnesses. Many are also uninsured.

Nearly everyone agrees that Dickson is a savvy businessman. His secret, he says, is carefully tailoring the health care he provides to what the community needs and looking for opportunities to generate cash. He has trimmed services that don’t make sense financially, which included some unpopular choices, such as closing the community’s only labor and delivery facility, forcing women to travel an additional 25 miles to Sierra Vista.

In addition, he has even found a way to keep costs low enough that he makes money from services provided to enrollees in the state’s Medicaid managed care plan, which pays far less than most private insurers. More than 30 percent of the hospital’s patients are insured through Medicaid.

Dickson joined purchasing organizations with larger hospitals in order to buy lower-cost medical equipment, and he drove up his volume of patient services by opening three rural health clinics across the region.

In addition to primary care doctors, each clinic has an X-ray machine, a lab and a physical therapist. Those ancillary services are a major part of Dickson’s business plan, generating income in addition to the basic doctor visit. “There’s one dollar for a patient visit, but three to four for diagnostics. You have to have that,” he said. Lab tests are then sent to the main hospital for processing rather than to third-party companies to keep the testing profits in house. Dickson purchased much of the hospital’s diagnostic equipment through grants from the federal government.

He’s also skillfully built a strong workforce, while many rural hospitals have difficulty recruiting. With a fulltime staff of 170, Copper Queen is the city’s second largest employer.

Alan Morgan, chief executive officer of National Rural Health Association in Washington, explains that the biggest challenge for rural hospitals is “workforce, workforce, workforce. For small rural communities, attracting and maintaining a quality healthcare professional within the facility is an ongoing challenge.” Doctors are often hesitant to work in rural areas because of lifestyle issues, and rural areas tend to have the most significant provider shortages.

Dickson employs 12 doctors, but pays them salaries similar to those they would earn in an urban hospital. The higher salaries, he says, enable him to attract the best doctors and keep them working in the hospital.

He has only two specialists: a general surgeon and a radiologist. When patients need to see a cardiologist, neurologist or other specialist, they often travel 100 miles north to Tucson. But adding telemedicine has allowed Dickson to keep more patients at Copper Queen-and the revenue for admissions and treatments. He has telemedicine programs for cardiology, pulmonology, dermatology and stroke, although stroke patients often have to be sent to larger hospitals for evaluation after their initial treatment.

But despite all of his successes, Dickson is anticipating some hard times. The state has begun cutting coverage for 140,000 Medicaid enrollees. In addition, it is scheduled to cut Medicaid payments to doctors and hospitals by 5 percent beginning Oct. 1, which comes on the heels of another 5 percent rate cut in April.

Altogether, the Arizona Hospital and Healthcare Association estimates that the new state budget reduces hospital payments by $531 million, including more than $1 million for Copper Queen. Association president Laurie Liles calls them the deepest cuts Arizona hospitals have ever sustained. At the same time, hospitals are supposed to be gearing up for the federal health care overhaul, including a major Medicaid expansion in 2014. “It’s really hard to get excited about 2014 when we’re worried about now,” Liles explained.

Dickson says the cuts are likely to wipe out his surplus, but he believes he will still be able to offer the same level of services. Other hospitals may not be so fortunate. “I’ve had several CEOs tell me they’ll close their doors,” he explains. “That means no more health care in those communities.” 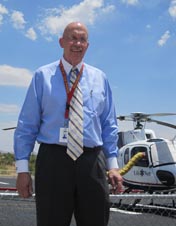 Southeast Arizona Medical Center’s Brian Bickel worries that the Douglas, Ariz., hospital will run deficits until the full implementation of the health law in 2014. (Photo by Jenny Gold/KHN)

One of them is Brian Bickel, who runs the 25-bed Southeast Arizona Medical Center in Douglas, about 20 miles east of Bisbee. Bickel’s hospital has been running a significant deficit for several years, and almost half of his patients are covered by Medicaid. Southeast is even more isolated than Copper Queen and sits several miles outside the town center on a desert plateau prone to wind storms.

“If the cuts get too much more devastating, then you have to make a decision as to what you can live without,” says Bickel, who predicted that his hospital might not survive the cuts.

The situation is frustrating, says Bickel, because when the federal health law is implemented in 2014, the expansion of insurance benefits to more Americans would improve his situation. “If what we’re looking at currently is devastation, then 2014 is going to be the gravy train rolling into the station,” he says.

Back in Bisbee, Dickson is preparing. If Bickel’s hospital closes, those patients are likely to travel the extra 25 minutes to Copper Queen. So Dickson is planning to add an extra 10 beds in a new wing. In fact, he says, if the hospital closes, it could provide him a new business opportunity: a free-standing Copper Queen emergency room in Douglas.