Yesterday, Sen. Ron Wyden, D-Ore., and Rep. Paul Ryan, R-Wis., rocked the health policy world with a new, bipartisan plan to reform Medicare. The two lawmakers propose to change the program for the elderly and disabled by giving beneficiaries a fixed amount to use on health insurance coverage. The plan would preserve traditional Medicare for those that prefer it, but would also open the program to private insurance providers who would be required to offer coverage at levels equal to the federal program. 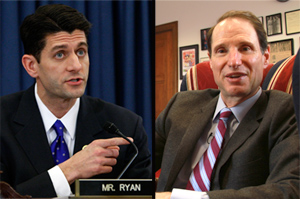 The blogosphere was ablaze with comments on what the plan means for Medicare, for beneficiaries and for the 2012 political season.

At his Wonkblog, Ezra Klein writes that Ryan and Wyden want to bring health care reform concepts to Medicare: “The Ryden plan is part of an ongoing attempt by the Republican Party to carve out a more politically sustainable position on Medicare reform. Conservative activists might like Ryan’s original plan, but voters don’t. Wonks might admire its boldness, but they admit that its numbers don’t add up. … [T]he competition is driven by tying the subsidy to the second-least expensive plan in the market. That way, the system gives beneficiaries a financial incentive to choose the cheaper plan. That is exactly — exactly! — how the Affordable Care Act works” (12/15).

Aaron Carroll, of The Incidential Economist, also says the plan shares some common threads with the health reform law, but with a big difference. “It sets actuarial minimums, it demands guaranteed issue and community ratings, it sets the subsidies by competitive bidding, and it allows for plan switching. But it’s different than the ACA in that it contains a fee-for-service public option.

Bob Laszewski writes at his Health Care Policy and Marketplace Review blog that the plan’s concept “borrows heavily from one championed by former New Mexico Senator Pete Domenici and former Clinton budget chief Alice Rivlin.” Laszewski has been arguing on this blog “that the risk for health care costs rising too quickly should not be borne entirely by seniors — that the stakeholders who really run the system should be most accountable. And, that is what the Wyden-Ryan plan would do” (12/14).

Yuval Levin, at The Corner blog at National Review, opines about the plan’s competitive bidding component: “In a sense, competitive bidding is an even more market-based reform than the original Ryan proposal; it’s a way for those of us who believe that markets can help control health-care costs to show confidence in our expectations of competition. If market forces do drive costs down, as conservative health-care experts expect, the reform would save an enormous amount of money, leaving both our budget and our health-care system in vastly better shape. If market forces do not drive costs down sufficiently, then we would have to find another way to address our entitlement costs. We would be back where we started, which is where most Democrats want to end up anyway” (12/14).

At Think Progress’ Health blog, Igor Volsky worries about some of the plan’s problems: “Connecting the premium support credits to the second lowest plan in any given geographic area would shift less costs to seniors than determining the credits independent of the actual bids (via indexing), but in high cost Medicare areas, the second lowest plan will be cheaper than coverage available through traditional Medicare. Thus, seniors who chose to stay in the fee-for-service could still experience a cost-shift: they would be responsible for the difference between the amount of the premium credit and the actual cost of the policy (conversely, if a ‘senior chose a plan that cost less than the benchmark, he or she would be given a rebate for the difference’). Lower-income residents would receive additional assistance.

Matthew Yglesias writes at his Moneybox blog at Slate that the plan sees Ryan jump left while getting Wyden to accept Medicare privatization: “Relative to the Medicare status quo, this would be a gigantic rightward leap. But relative to where Paul Ryan was 12 months ago, it’s a gigantic leftward leap. Most notably, there’s at least some reason to believe that competitive bidding between private and public Medicare providers will generate some real cost savings. But if publicly run Medicare continues to be the most cost-effective option for most people (as I think there’s every reason to believe it will be) the vast majority of elderly people will still be basically getting insurance from Medicare” (12/15).

Ed Morrissey at the Hot Air blog writes that the plan may give some Democrats fighting for re-election a reason to join up with Wyden and Ryan. “If Wyden gets a few more Democrats to join the agreement — and there is no shortage of red-state Democrats looking to get re-elected this cycle and needing some bipartisan cover — the deal will make Obama look like the extremist, not Ryan and the Republicans.  It also eliminates the argument that the federal government needs to run all of the health-care industry as it does for seniors. … This is the first inkling that Congress can actually act on this crisis, and if Obama tries to stamp it out in order to selfishly protect a political advantage, then we should make sure to headline it in screaming letters” (12/15).