For the first time in three years, Blue Shield of California leads enrollment in the state’s insurance exchange while Oscar, a closely watched newcomer, experienced a slow start.

The Covered California exchange said it won’t release enrollment figures by company until later this month, and insurers declined to share specifics until then. But interviews with industry officials indicate some insurers, such as Blue Shield and Molina Healthcare Inc., picked up more business while others lost ground during the Affordable Care Act’s third open enrollment.

Until now, Anthem Inc. had led Obamacare enrollment in California with 30 percent share of the market. But now rival Blue Shield has jumped ahead. 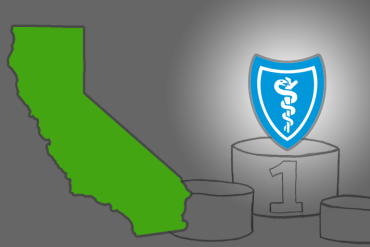 A spokesman for Anthem declined to discuss the company’s California results ahead of the exchange’s announcement. But last month, the company said its Obamacare enrollment in California and 13 other states was 30 percent lower than expected and rivals’ lower rates were one reason. Anthem Blue Cross is California’s largest for-profit insurer.

“We aren’t experiencing the overall market growth on the public exchanges that we projected when we laid out our five-year plan and unsustainable pricing in some markets is hurting our historic market share,” Anthem Chief Executive Joseph Swedish said during a Jan. 27 conference call with analysts and investors.

Last week, Covered California said about 425,000 new enrollees had picked out coverage but more last-minute applicants were being counted. Nearly 1.2 million consumers had renewed their policies, bringing enrollment to about 1.6 million.

Enrollment totals will increase some as many people rushed to beat the Jan. 31 sign-up deadline. But the final tally will likely drop because some people don’t pay their initial premium or they find coverage elsewhere.

The California exchange added two new insurers for this year — Oscar and UnitedHealth Group Inc. — but neither garnered much enrollment, according to sources who spoke on the condition of anonymity.

Both Oscar and UnitedHealth are only selling policies in a limited number of regions and each insurer had less than 1,000 enrollees by early January.

Covered California had denied UnitedHealth’s bid to sell statewide during 2016 and instead limited the insurer to five of the state’s 19 rating regions, primarily rural counties in Northern California. Then in November, the company announced heavy losses on individual policies across the country, and it cut back on marketing of exchange coverage companywide.

Oscar, on the other hand, blanketed Southern California with ads touting its high-tech, customer friendly approach to healthcare. But its initial sales in Los Angeles and Orange counties were modest, according to sources who saw preliminary enrollment totals.

The New York company was a relative unknown in California and going up against established insurers with strong name recognition and existing networks of doctors and hospitals. The company hasn’t commented on its California enrollment, but overall it covers more than 125,000 people in New York, New Jersey, Texas and California.

“We are thrilled by the reaction we have received entering the California marketplace this year,” Oscar Chief Executive Mario Schlosser said in a statement. “Our priority is to provide simple, intuitive healthcare for our new members and we look forward to continued expansion and growth throughout the state.”

HMO giant Kaiser Permanente appears on track to remain in third place in Covered California, behind Blue Shield and Anthem. Molina, based in Long Beach, also made substantial gains during open enrollment after a smaller presence the first two years, according to people familiar with the market.

Peter Lee, executive director of Covered California, said the exchange plans to release detailed data on enrollment by health plans and ethnicity later this month. The state spent $29 million on marketing during the recent open enrollment to attract the uninsured and persuade existing enrollees to renew.

“Most of us are healthy. But you need to remind people just because you didn’t use your insurance it’s still something you need,” Lee said. “Health insurance marketplaces need to be constant sales and renewal machines.”