Nonprofit Blue Shield of California made a big splash in June when it announced a cap on profit margins: any profits above 2 percent of revenue would be returned to policyholders. The company won praise from some and criticism from others who said the cap was a meaningless gesture given the company’s big reserves: $3.6 billion or 66 percent of total assets. In fact, Blue Shield is well positioned to move forward, with sufficient cash to make acquisitions if necessary, says CEO Bruce Bodaken. 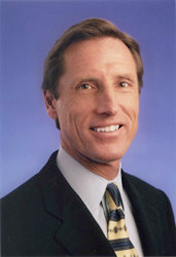 In a wide-ranging interview at the company’s San Francisco headquarters, Bodaken spoke with Russ Mitchell about the future, the impact of the cap and criticism of his $4.6 million salary last year. Among his favorite subjects: the “accountable care organization” that Blue Shield is partnering with CalPERS, which administers pension funds and health care benefits for public employees. The federal health overhaul law encourages the formation of ACOs as a means of restraining costs and improving quality.

Q: Beyond the health care law, how might medical costs be reduced?

A: The key is to start with prevention, at both the individual and provider level. We have (at Blue Shield) a program called Wellvolution. There are serious incentives to work on smoking cessation, stress management, weight loss, all the sorts of things that often end up resulting in chronic disease — which especially with the boomers are going to be the big dollars as we go forward.

The other piece is the kind of collaboration within the ACO environment where we have physicians and hospitals and ourselves and our members all being focused on providing the best health care at the lowest costs.

In Sacramento, in our ACO partnership with CalPERS, we’ve seen a 15 percent reduction in hospital readmissions, and a reduction in admissions as well. We committed to CalPERS that we would seek a zero percent trend. They received a zero premium increase for 41,500 members in the ACO; their premium was the same in 2009 as in 2010. We did it by becoming more efficient, so it’s not a function of losing money. Blue Shield, Catholic Healthcare West and Hill Physicians agreed to share the risk to deliver promised savings, and all of us were able to achieve a modest bottom line.

Q: One challenge for ACOs will be avoiding the mistakes of the HMOs in the 1990s, which sparked a major consumer backlash.

A: I think we’ve learned a lot since the ’90s and we understand that not working through the physician is a huge mistake. We’ve got to have a collaboration so as we make determinations from medical policy, physicians are going to support and can tell the members “we think this is the best care possible you can get.” Saying that your HMO won’t let you have it or prescribe it, obviously that’s not a recipe for success with the consumer.

Q: Some critics point to a clause in your announcement that says you can end the profit cap if necessary for investment. That seems to leave a lot of wiggle room.

A: I believe what we said is that our board of directors would only change it if they were to deem it necessary for our margins to increase, either as a result of concerns over solvency or the level of investment necessary was much greater than we think 2 percent would be sufficient to provide. We don’t see that happening, certainly over the next couple of years.

Q: Your annual salary was criticized in media reports after your announcement. How do you respond to the criticisms?

Q: Insurers use their reserves not only for financial stability but also to buy other companies. What are your plans, in a consolidating industry, for mergers and acquisitions?

A: One of the things we’ve said when asked about why we have the reserves we have, is that we certainly need to be well capitalized to get (a good rating from credit rating agencies). We also want to have sufficient funds available to acquire other businesses that could be in the health care business or could be in other businesses that would be supportive of what we do as a health plan.

We’re not in a position to buy certainly the largest organizations but we do think we have enough financial flexibility to make acquisitions as necessary. We have nothing currently in discussion and if I did I wouldn’t tell you. The fact of the matter is we want to be prepared for the kind of increasing capabilities and increasing talent (we need) as we go forward.

Q: What about another company buying Blue Shield of California?

A: The board and I have discussed the independence of Blue Shield on a couple of occasions, and as we look around we believe that we are offering a very high quality competitive service. I think we are a catalyst for positive change in the market. As long as we continue to play that role, we think our independence is the best thing for our board, for our customers, for the state of California.