Update 3:45 p.m.:  Speaker Boehner sent a letter to the White House Thursday formally declining to recommend appointments to the panel.

Note to the Obama administration: Don’t wait by the phone for those GOP nominations to the Independent Payment Advisory Board, a panel created in the health law to make recommendations to Congress on how to control Medicare costs. 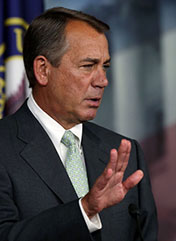 House Speaker John Boehner, R-Ohio, made it clear Thursday that neither he nor Senate Minority Leader Mitch McConnell, R-Ky., would be sending in any names for consideration.

“This is the 15 unelected, unaccountable individuals who have the authority to deny seniors’ access to care,” Boehner told reporters. “The American people don’t want the federal government making decisions that doctors and patients should be making.”

Known as IPAB, the panel is charged with making proposals to reduce Medicare spending if government funding of the program grows beyond a target rate. Congress can pass alternative changes of the same size instead, but if it fails to act, the IPAB plans would become law. But recent slowdowns in the growth of Medicare spending means there’s no immediate pressure for the panel, which has not yet been assembled, to make spending recommendations to Congress.

During a news conference, Boehner also defended House Republican leaders’ decision to vote yet again next week to repeal the health law.

And just to be clear, Boehner says he still hates the law and wants to see it repealed. “Obamacare is going to drive up the cost of health care, drive up the cost of health insurance, and make it harder for small businesses to hire workers,” he said. “I believe that at the core of who I am. And I’m going to do everything I can to make sure that we don’t wreck the best health care delivery system the world has ever known.”