Enrolling in healthcare.gov is not easy. In Alaska, just 53 people enrolled in the first month. Anchorage hair stylist Lara Imler is one of the few who got through. Now though, after she discovered problems with her application, Imler wants to cancel her enrollment. 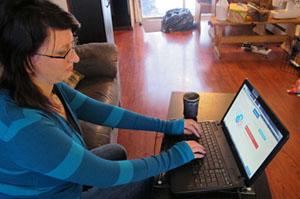 “I don’t even know how to feel about the whole thing anymore because I can’t even get anyone who has an answer to help,” she says. “It’s just such a lost cause at this point.”

A few things went wrong with Imler’s healthcare.gov application. First, according to the website, she successfully enrolled in a health plan. But her new insurance company, Moda Health, didn’t have her application. When she called the healthcare.gov hotline number, no one could help her figure out what went wrong. Then she found out the website miscalculated her subsidy amount. She was supposed to receive a monthly subsidy of $366, but the website only let her use $315.

“The subsidy issue is weird,” she says. “If you look at my profile on the website it shows my full subsidy, but it says I’m only using part of it. So they know I’ve got a screwed up subsidy but they don’t know what to do with it. There’s no one directly you can talk to, to say, ‘Hey my subsidy is on there. How do I apply for all of it?'”

It turns out everyone’s subsidy in Alaska was miscalculated. Enroll Alaska, a benefits consulting group, discovered the error in mid October and suspended enrollments. It took two weeks for the the Health and Human Services Department to resolve the issue. Since then, Enroll Alaska has signed up about 80 people in the marketplace. Chief Operating Officer Tyann Boling says half the people her insurance agents sit down with have tried to navigate healthcare.gov on their own and given up.

“This is not an easy process. I think even if this website was functioning at 100 percent this would not be an easy process,” Boling says. “This is complicated. If you click on one wrong thing, there’s no back buttons, it can be a really, really nasty process to go through.”

Boling is frustrated with the website, but not as frustrated as Lara Imler. After weeks of trying — and failing — to make her application work, Imler wants a break from healthcare.gov.

She never got a packet from her insurance company asking her to pay the first premium. She figures canceling the plan — with the chance to start fresh later — is her best option.

So on a recent morning, she sat down in her living room, with her laptop and a cup of coffee to try to resolve her difficulties—but not without frustration.

“I’ve had to change my password about four times. Oh you know what, I have it written down. I cheated! There it is,” she says.

The site logs Imler in pretty quickly. And after a few clicks she finds her enrollment information:

The application that she finished on Oct. 24 says, “status, complete.” Imler clicks on the actual application and scrolls down to  an ominous looking red icon that says, “terminate coverage.”

“So you hit the terminate button. It says you’ve chosen to end the following coverage. … You then have to check ‘I have fully read and understand that I’m choosing to terminate coverage,'” she says. “Then you click terminate again and we’ll see what happens.”

What happens is nothing. The health plan Imler signed up for is still listed in her profile. She logs out and then back in, and it looks exactly the same. She checks her e-mail for a notice of coverage termination and finds nothing there either. Imler leans back on the couch and looks surprisingly calm about the whole thing:

When she is able to cancel her plan, Imler says she won’t be quitting healthcare.gov for good. This is a separation, not a divorce. Imler’s been uninsured for nearly a decade and wants that to change. She plans to log back into the website early next year and is hopeful that signing up for insurance will go a lot more smoothly then.

This story is part of a reporting partnership that includes APRN, NPR and Kaiser Health News.

Breaking Up With Healthcare.gov