Louisiana Democrat John B. Breaux left the Senate seven years ago, but old habits die hard. Today he fell back easily into his former role of compromise builder as he stressed the need for political common ground to overhaul Medicare next year. 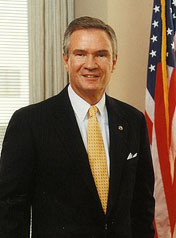 After a House Ways and Means Health Subcommittee hearing to delve into “premium support” models, Breaux held court with reporters and concluded that his own blueprint from 1999 might just do the trick. “I didn’t realize how good it was until I was out of Congress,” he quipped.

Joking aside, Breaux, who is now senior counsel at the law firm Patton Boggs, argued that bipartisanship would be necessary to enact any major Medicare bill next year and that it would start in the political center. But he also insisted that this year’s retirement of Sen. Olympia Snowe, R-Maine, would not totally empty the Senate of moderates. He specifically named Finance Committee Chairman Max Baucus, D-Mont., and ranking Republican Orrin Hatch, R-Utah, “after the election,” as senators who could potentially start a movement working from the middle. Hatch is facing a tough re-election battle, including a primary challenge.

The key, Breaux said, is to change the way that health care is delivered in Medicare, to make it more efficient, and then have private health plans and the traditional, government-run program compete, with  federal premium assistance tied to the growth of health care costs, which, he said, would decline over time under a premium support model.

This approach, he said, would make Medicare more like the health care program for federal employees. Beneficiaries would get subsidies from the federal government to join a private or government-run health plan. Indeed, he cited the federal employee plan and Medicare’s prescription drug program as examples of premium support models that work.

The major premium support proposal under discussion right now is from House Budget Committee Chairman Paul Ryan, R-Wis. Democrats – and one Republican at today’s hearing – expressed concern about Ryan’s linking of the growth of premium assistance to the overall growth of the economy, which historically has increased at a slower pace than health care costs. Because federal spending would be limited, additional costs would likely be borne by Medicare beneficiaries, critics of the Ryan plan say.

Breaux said that Ryan’s plan was a good start, but shared Democrats’ concerns that federal premium help would be insufficient for seniors. He made the case that the model he proposed together with then-Senate Republican Leader Bill Frist in the 1990’s would not shift costs to seniors and could lower overall Medicare costs 12 percent. Those were his own estimates, which he based on greater efficiency from competition between plans and organizing care better.

“The debate should be about a better delivery system that has benefits for seniors,” he said. “It’s not about changing Medicare. It’s about changing the way we give it to people.”