MORENO VALLEY, Calif. — Jennifer Vargas’ path toward becoming a doctor took her from UCLA to Guadalajara before it ultimately led back home, to California’s vast Inland Empire east of Los Angeles.

When the Chino Hills, Calif. native graduated from medical school in Mexico, her first choice for residency training was Riverside County’s public medical center, which serves among the fastest growing and most medically deprived parts of California.

It was just what she wanted:  To serve a vulnerable patient population facing high barriers to care, particularly immigrant patients from Mexico who would benefit from a Spanish-speaking physician.

“It offered the best fit for me,” said Vargas, 32, a second-year resident in family medicine at Riverside County Regional Medical Center. 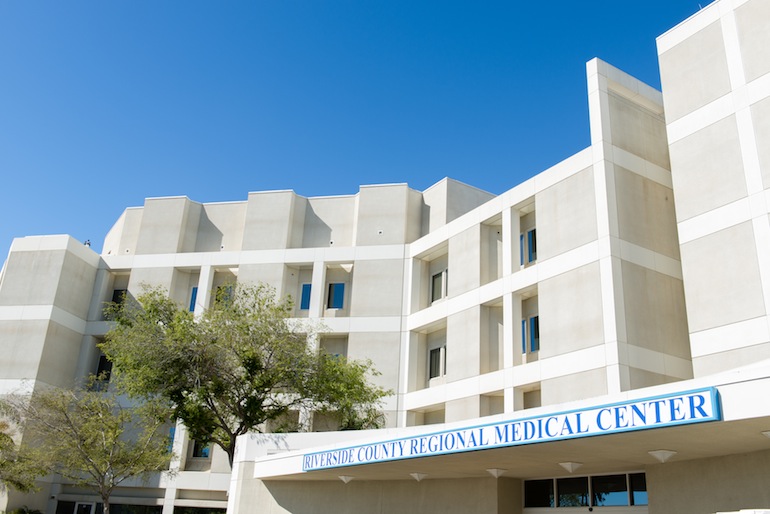 The Inland Empire – a region roughly the size of Maine, including both Riverside and San Bernardino counties — needs hundreds more like her. Officials have launched a muscular effort to educate physicians locally and entice doctors from the outside to settle in Southern California’s interior, miles from the famously alluring coast.

They’re trying to do more than fix a doctor shortage. They’re attempting to train and attract the right kind of physicians — mainly primary care providers who relate to disadvantaged patients and want to treat them in their communities, before they become critically or chronically ill.

Some see it as an experiment with lessons for other underserved regions of the country – a way to spread out and diversify the next generation of doctors.

“Today, our country is largely training the sons and daughters of wealthy people to be physicians,” said G. Richard Olds, dean of the University of California, Riverside, School of Medicine. “You wonder why we have a problem with people not serving in underserved communities; it’s because they don’t know what an underserved community looks like.”

He’s looking for students who grew up in the Inland Empire and want to stay. He also wants people who speak English as a second language, or who were the first in their families to attend college. 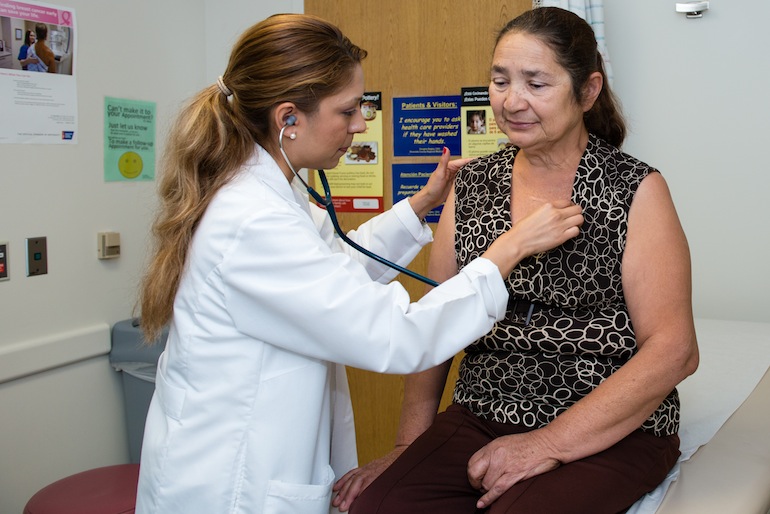 Vargas checks Sanchez for an irregular heart beat. The 54-year-old has been experiencing chest pain (Photo by Heidi de Marco/KHN).

The Inland Empire has for decades been short of physicians as newcomers poured in. Its population swelled from 1.6 million in 1980 to 4.4 million today. In 2011, it had 43 primary care physicians per 100,000 population, a supply roughly half the level recommended by experts, according to a study published last year by the California Healthcare Foundation.

Now, with the expansion of health insurance and Medi-Cal through the Affordable Care Act, many more new patients have spilled into the system.

Volume has continued to rise since then and now is only limited by the system’s capacity.

“If we had more providers, we would have more patients,” Leung said.

A Bagful Of Drugs, A Long List of Ailments

Ibarra, a 50-year-old Corona resident with diabetes, had come to renew her insulin prescription and get treatment for pain in her right knee, which she injured in a fall last year. 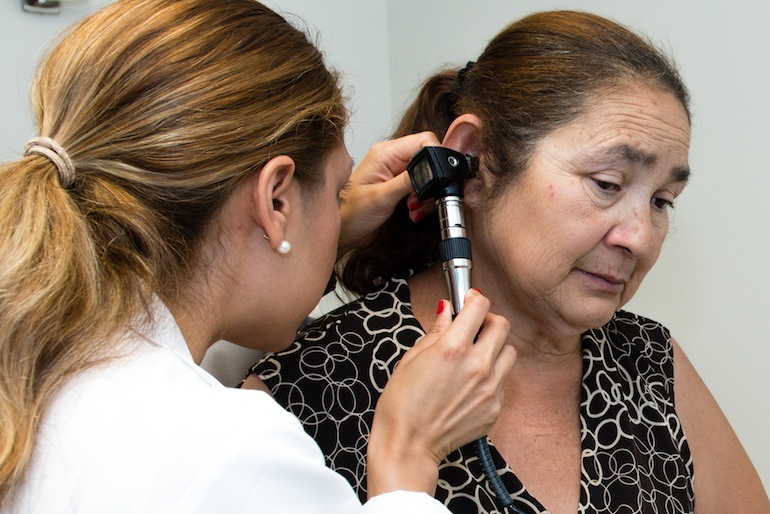 Maria Sanchez, 54, from Perris, California, says she feels comfortable with Vargas because she speaks Spanish. Sanchez says it may take weeks to get an appointment with Vargas, but it’s worth it for her. (Photo by Heidi de Marco/KHN).

But as Dr. Bakr Khalifa Al Omrani, a second-year medical resident, quizzed her about her recent medical history, she added more ailments to the list, including chronic headaches, stomach problems and high cholesterol.

As she spoke, Ibarra pulled out a square-foot size zip-lock bag with 15 medication bottles and set them on a small counter in the exam room.

“Okay, I will not be able to deal with all of the problems today,” Khalifa told her through a Spanish translator listening in by phone. “Is your knee the most urgent problem?”

It was. Khalifa tried to flex her knee, which bent only to about 90 degrees before causing sharp pain.

The appointment lasted 35 minutes, about twice as long as primary care visits usually do. It’s a common problem: Because patients have gone without care so long, doctors have to spend more time sorting out their problems. That, in turn, lengthens wait times for other patients seeking appointments.

The shortage of doctors, and the pent-up demand for care, is a problem with deep roots.

Historically, the region has not cultivated young physicians. The Inland Empire is below the state average in producing high school graduates who go to college. And until the UC Riverside program was founded in 2013, the region had only one medical school, at Loma Linda University.

To top it off, Olds said, there aren’t enough slots to train medical residents in the region.

All of these obstacles narrow the pipeline of available doctors. “Where you come from is about 40 percent of the decision” of where to practice, the dean said. “And another 40 percent is where you completed residency.”

In addition, the Inland Empire has hardly been an attractive destination for doctors from the outside.

Even existing doctor groups have trouble covering the start-up costs of bringing on a new doctor, whose practice may take three years to become self-sustaining.

The doctor shortage has hit hard at the Inland Empire Health Plan, the Medi-Cal managed care organization serving the two counties. Membership passed 1 million in February, up 60 percent from the 623,000 it had in December 2013, according to state figures.

“We’ve had to think creatively about how to get more doctors in our plan,” said Dr. Bradley Gilbert, the nonprofit’s CEO.

One way is to provide grants — to private physician groups, hospitals and even the county health systems to defray new doctors’ startup costs.

In September, the plan set aside $8 million from its reserves for that purpose, $5 million for primary care doctors and $3 million for specialists.

IEHP received applications for some 199 doctors for the grants, which will cover up to $100,000 of a primary physician’s annual costs and up to $150,000 of a specialist’s. As of last month, the health plan had approved grants for 123 physicians, 71 of them in primary care. Hiring has already begun.

To boost the long-term supply, UC Riverside is recruiting medical students through “mission-based scholarships.”  These cover the entire cost of medical school if students commit to practicing in a needed primary care discipline in the region for five years after residency.

Vargas knew from age 7 that she wanted to be a doctor.

One of four children of Mexican immigrant parents, she volunteered at a cancer hospital near her home when she was in high school and continued to volunteer at local hospitals while studying biology and Spanish literature at UCLA. Later, while in Mexico, she and fellow medical students made house calls in small cities and villages.

Today, her connection with her patients is obvious. 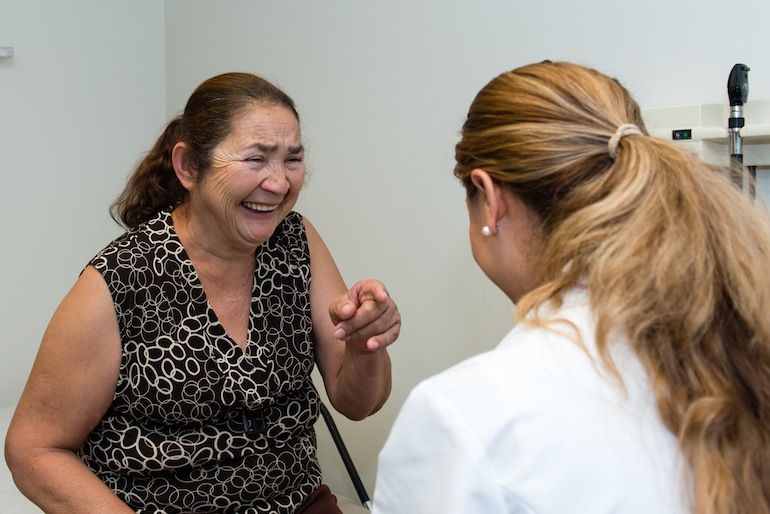 Vargas says her patients become part of her family after treating them for a while. “I treat them…I treat their family members,” says Vargas (Photo by Heidi de Marco/KHN).

“I understand English, but it’s better when I can express myself in Spanish,” Sanchez said. “It’s easier to understand the advice they give you.”

Sanchez, a permanent U.S. resident originally from Nayarit, Mexico, has diabetes, high blood pressure and high cholesterol. After 30 years of working in various factories packing oranges and avocados, the mother of three also suffers from lower back pain and sore feet.

But on this day she is seeing Vargas for chest pains, numbness in her right arm and an itchy bump on her cheek.

It can be a hassle to get an appointment, said Sanchez. “Sometimes I can be on hold for as long as 30 minutes, only to get disconnected and have to call again.”

On this day, the appointment takes 30 minutes. Vargas orders an electrocardiogram, prescribes ointment for her cheek and medication for her chest pain.

“Thanks for worrying about me,” Sanchez says in Spanish as she leaves.

“Take care of yourself,” Sanchez adds. “I need you a lot.”

Bringing Doctors To Patients Who Need Them Most