In the contentious debate over health care in this country, the United Kingdom’s single-payer, government-funded National Health Service has been held up by both sides as a system to be either emulated as an ideal or avoided as an abomination. Neither of those extreme views allow that British health providers might have something to learn from the way things are done on this side of the Atlantic.

But that is just what 20 doctors and nurses from northwest England came to do this week in Washington.  The group spent the weekend dodging rain worthy of their home, and each day’s schedule made time for tea. The main events were to tour Kaiser Permanente’s clinic on Capitol Hill and the Veterans Affairs hospital, two giants in U.S. health care delivery world, and to learn about how they each had achieved certain health outcomes while saving on the cost of care. (Kaiser Health News is not affiliated with Kaiser Permanente.) 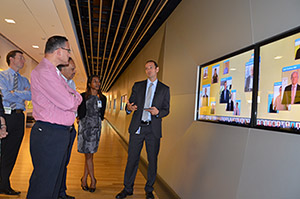 “Our culture is different,” said Dr. Robert Stead, a pulmonologist based in East Cheshire, England. “The Americans have a social police force and army, but not health care. In our country, there is strong national support for our system.”

On Tuesday, the British contingent, part of a leadership academy with the National Health Service of Northwest England, left their teacups and saucers on the conference table to tour the Kaiser Permanente Total Health Clinic, starting with an explanation of the company’s inception in 1945. Led by the clinic’s medical director, Dr. Ted Eytan, they landed in front of a video depicting Kaiser’s vision for its future, complete with smartphone programs that allow patients to perform “virtual triage” and treat their malady without entering a clinic.

“It’s all IT, no new medicine,” commented one physician, standing in front of a lime green wall with the words “The Future of Health Care.”

“If only we had better electronic medical records,” said another, echoing a common sentiment among the group that the U.K. was behind in adopting information technology to share patient information and data.

Eytan led the clinicians through a display of new technology, from a handheld, portable ultrasound to a webcam-like system for consulting doctors remotely. They stopped in between the show-and-tell to talk about the advantages of connecting patients to their doctors and nurses through regular e-mail and phone conversations.

Throughout the two-day sessions, discussion on how to improve the British system turned up buzzwords reminiscent of the U.S. health reform debate: integrated health care, patient-centered services, cutting the cost of care. As it turns out, the group wasn’t comparing apples and oranges, but rather some sort of fruit salad, where different elements of each system could match or not.

“We’re similar – our government has shifted too, and our whole system has changed,” said Deborah Arnot, a director at the NHS Leadership Academy and a nurse. “When they talk about integrated care, we can understand that.”

But Arnot said there were marked differences, as well. She thought the treatment of nurses in the U.K. was more progressive – noting that the director of nursing at their hospitals worked alongside, not under, the director of medicine.

Stead agreed that the American systems seemed more physician-led, which he said could also mean higher costs. He gave the example of how the National Health Service gave midwives more autonomy and responsibility over childbirth, rather than obstetricians, as is common in the U.S.

And the idea of multiple government programs catering to different populations – veterans, elderly, and poor – was quite literally a foreign concept to a group raised on the universal health system. In England, everyone has access to a primary care doctor at no cost. And if they need to access emergency care, there is no thinking of medical bills.

But Dr. James Catania, a physician and medical director in Stockport, a city near Manchester, England, said the system has its own shortcomings. General practitioners only have 10 minutes to spend with their patients, discouraging them from asking more questions or spending time talking to specialists. And while the English are happy to have universal health care, he said they are “frustrated with the pathways” to access that care.

“Kaiser has successfully achieved one of the foundational principles of the British system,” he said.

As their trip came to an end, and with luggage stowed in the clinic, Arnot asked the group how they would like to move forward after returning to the U.K., since team members hoped to expand on some of the ideas they got during the trip. They decided to meet in six weeks to regroup and take stock.

Reflecting on the past three days, the nurses and doctors also picked apart their experiences at the clinics and what they learned. They almost unanimously said they would press the National Health Service to prioritize information technology, regardless of budget cuts. They also doled out the darts and laurels for each system.

“Their track record hasn’t always been so rosy,” said one member, after a colleague extolled the achievements of the Kaiser Permanente system.

Another clinician said he wanted to focus on turning the resources available into patient-centered care back at home.

“That’s what I’m always banging on about,” he said.