Brooklyn, New York, home to hipsters, an NBA team and a seemingly unlimited supply of new ultra-chic boutiques and restaurants, seems to be increasingly inhospitable to hospitals.

Despite the efforts of community activists, elected officials, and blue-ribbon panels, Brooklyn is close to losing two large and historic hospitals, and others might not be far behind. Local economics, politics and long-range health care trends that have been shuttering hospitals around the region for decades could claim more Brooklyn institutions in the years ahead. 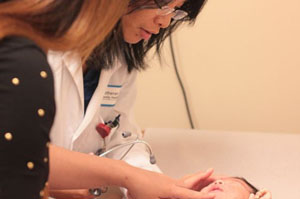 Interfaith Medical Center, which has been in bankruptcy since December, told a federal judge late last month that it would begin winding down operations in mid-August, end inpatient admissions a month later and finish outpatient procedures by mid-October. The hospital, formed by a merger of Brooklyn Jewish Medical Center and St. John’s Episcopal Hospital, has been in operation in the Bedford-Stuyvesant neighborhood for more than a century. It is one of the city’s largest providers of mental health care with 120 inpatient psychiatric beds and 67,000 outpatient behavioral health visits a year.

Four miles away in the Cobble Hill neighborhood, the State University of New York has been trying to shut Long Island College Hospital since March. The SUNY Downstate network of three hospitals and five colleges of medicine and related fields has been losing tens of millions of dollars a year, and officials say selling off LICH is crucial to overhauling the system.  Hospital workers and community supporters have been fighting SUNY in court, and hospital closures have become a hot topic in this year’s contest to succeed three-term mayor Michael Bloomberg.

Also precariously positioned is Wyckoff Heights Medical Center in Bushwick. CEO Ramon Rodriguez maintains the hospital is in better shape than its peers – in 2012, it had a surplus of $3.8 million, or roughly 1 percent, after years of multi-million-dollar deficits – but he also says it will be a challenge to break even this year and in 2014. The hospital has 30 days worth of cash on hand, he said. Health care experts say that buffer is not unusual for a facility like Wyckoff, but barely sufficient to run a financially viable operation.

“Brooklyn hospitals are cash-strapped, so that’s not surprising,” said Dr. Fred Hyde, a hospital consultant and professor of health policy and management at Columbia University’s Mailman School of Public Health. “Upstate hospitals typically have enough reserves for 60 days, and AA-rated [very strong, financially] hospitals would have between 150 and 200 days worth.” 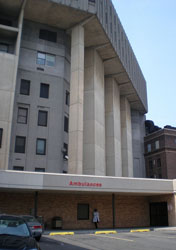 Interfaith Hospital on Atlantic Avenue has been in bamkruptcy since December. (Photo by Will Tung via Flickr)

Rodriguez is concerned that the nearby closures will overwhelm his hospital, and will also leave Wyckoff with fewer referral options. “When Interfaith closes, we will have no place where we can send a decompensating mentally ill person from our emergency department,” he said. “Interfaith is the only provider of inpatient behavioral health that accepted our patients.”

At the same time, he said, Wyckoff’s payer mix is improving. The hospital is doing more to get insured, working-class patients from neighboring Queens, and it’s trimming $2.5 million in expenses from a money-losing family care clinic, while maintaining an affiliation with the clinic’s new soon-to-be-announced private physician group.

In the last six years, at least nine hospitals in the city have closed – including two that have been acquired by rival systems and turned into outpatient centers. Most were in relatively poor communities. A handful were in affluent areas but served as “safety-net” facilities, because local residents who were wealthy and insured favored other facilities farther away.

Determined not to leave hospitals “on their own,” New York applied to the federal government a year ago for a Medicaid waiver that officials are hoping will net the state $10 billion through better care management — some portion of which could be used to bolster and modernize Brooklyn’s health care system. The federal Centers for Medicare and Medicaid Services in 2010 approved a waiver of that amount for California.

But almost a year later, Albany has received no money from Washington. In May, Governor Andrew Cuomo sent a plea to Health and Human Services Secretary Kathleen Sebelius.

“Due to a rapid deterioration in the financial status of essential components of the health care services system in Brooklyn, if nothing is done within the next 12 months, the outcome will be disastrous,” Cuomo’s letter said. “Without the waiver, at least four hospitals — having among them nearly one thousand inpatient beds and supporting hundreds of thousands of emergency room and ambulatory care visits — will be in danger of closing.”

Cuomo and state officials have refused to continue subsidizing the hospitals as they are to keep them open. Instead, state officials want to change the mix of services in Brooklyn, where 1 million people are covered Medicaid. “Our challenge is to find the means to modernize and downsize these hospitals (where it makes sense) and to develop community-based, ambulatory care infrastructure as rapidly as possible,” Cuomo wrote.

Two years ago, a commission convened by Cuomo and chaired by private investment manager Stephen Berger anticipated a cascade of hospital failures in Brooklyn, if nothing were done, due to mounting debts and plummeting revenues.

Unlike a previous commission Berger chaired evaluating the entire state, the Brooklyn panel did not suggest closing hospitals — even though the panel’s final report said Brooklyn’s hospitals weren’t serving the health care needs of the borough’s residents.

“You want a network of outpatient clinics and ‘surgi-centers’ and primary care linked to different kinds of inpatient facilities, and much smaller  inpatient facilities with much smaller lengths of stay,” panel chair Stephen Berger recently said in an interview. “Now, you don’t do this overnight, it takes several years to build things and change things out and change concepts.”

The report said despite a glut of beds, hospitals could still survive and play a valuable role – if they joined forces and consolidated their services. But a series of proposed mergers generated negotiations that all came to naught.

“The concept of merging was to buy us some time and transition to a new system,” Berger said. “But no one’s been willing to merge, and everybody’s been resistant. People would rather hang on by their fingernails.”

One of those who refused to merge was Rodriguez, who served on the Brooklyn commission with Berger, before taking the helm at Wyckoff Heights.

“We rejected that part of the recommendations,” he said. “Our board believes before we can consider mergers, we need to take care of our own house. We have to be great at what we’re doing, before we can get to a point where we can be trusted to do anything with another organization.”

This story is part of a collaboration among NPR, WNYC and Kaiser Health News.