The bill considered the most likely prototype for partial repeal of the Affordable Care Act would result in as many as 32 million more people without health insurance and would double premiums in the individual insurance market, budget scorekeepers said Tuesday.

The estimate by the Congressional Budget Office and the Joint Committee on Taxation was on the impact of the bill passed by the Republican Congress in 2015 and vetoed by President Barack Obama last January. The analysis was conducted at the request of Senate Democrats.

“The number of people who are uninsured would increase by 18 million in the first new plan year following enactment of the bill,” said the report. That increase could reach 32 million in 2026.

At the same time, CBO and JCT estimate, premiums for those who purchased coverage in the individual insurance market would increase by 20 to 25 percent in the first year, “and premiums would about double by 2026.”

Republicans called last year’s bill a “dress rehearsal” for what they might try this year, because it was a “budget reconciliation” bill that needs only 51 votes to pass in the Senate and cannot be filibustered. Last week the House and Senate passed a budget resolution instructing specific committees to begin work on dismantling the health law, using the same budget reconciliation process.

Only items that directly impact the federal budget can be included in such a bill, however. That meant last year’s legislation would have repealed most of the ACA taxes that help fund the health law’s programs, the penalty for individuals who don’t have coverage and the tax subsidies for people to purchase coverage, as well as the funding to expand the Medicaid program. But it could not change the health law’s regulation of the insurance market, including the provision requiring insurers to sell to people with pre-existing health conditions.

The result, said CBO, would have been fewer healthy people purchasing coverage, which would leave the insurance pool with higher percentage of sick enrollees and drive premiums up. Insurers, according to the report, would likely stop offering coverage in the individual insurance market. 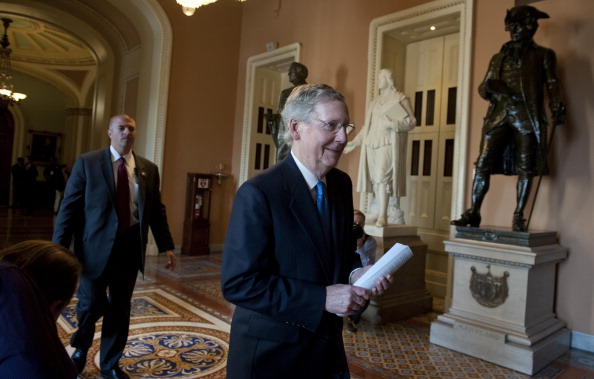 Senate Majority Leader Mitch McConnell and other Republican leaders called last year’s bill a “dress rehearsal” for what they might try this year. (Douglas Graham/CQ Roll Call via Getty Images)

“CBO and JCT estimate that about half of the nation’s population lives in areas that would have no insurer participating in the nongroup market in the first year after the repeal of the marketplace subsidies took effect,” said the report. And that would rise to “about three-quarters of the population by 2026.”

Democrats were quick to pounce on the estimate as evidence that Republicans are on a dangerous path.

“Repeal and delayed replacement is repeal,” outgoing Health and Human Services Secretary Sylvia Burwell told reporters at a briefing. “CBO has just stated with analytics and real numbers what happens during that interim period” when part of the law is taken away and part remains.

“Today’s CBO report is a clear repudiation of the Republicans’ misguided plan to repeal the Affordable Care Act,” said Rep. Richard Neal, D-Mass., the ranking Democrat on the House Ways and Means Committee.

Republicans cautioned, however, that last year’s bill might not be a good reflection of what will happen in the coming weeks and months.

“The CBO can’t score the replacement because it hasn’t been drafted,” wrote GOP health policy analyst Avik Roy in Forbes. “But its estimates of the impact of (last year’s bill) are largely meaningless without consideration of what the GOP’s replacement will look like.”

This story was updated to add Rep. Brady’s statement when it came out.