When President Donald Trump signed the last-minute budget deal into law earlier this month, the news coverage emphasized how the bill boosted military funding, provided tens of billions in disaster aid and raised the debt ceiling.

But buried deep in the 652-page legislation was a repeal of a limit on Medicare coverage of physical and occupational therapy. It received little public attention, but to the American Physical Therapy Association, this headline was decades in the making.

The group had spent 20 years lobbying to reverse a component of the Balanced Budget Act of 1997, which would have limited patients to $2,010 worth of occupational therapy a year, and another $2,010 of physical therapy and speech-language pathology. Each time the limit was about to kick in, APTA managed to postpone its implementation — sometimes for just months, sometimes for another year or so.

Justin Moore, APTA’s CEO, quit his job as a physical therapist in Missouri and moved to Washington, D.C., in 1999 specifically to lobby Congress full time about staving off these so-called therapy caps. He recalls recruiting thousands of physical therapists to protest on Capitol Hill, long hours lobbying in congressional offices and eleventh-hour victories to keep the cap from taking effect.

Just hours after Trump signed the sweeping bill, Moore joked: “I’ve got to figure out what to do next,” celebrating the victory with cupcakes in his Virginia office.

It’s a story of one long-fought battle, marked by legislative twists and convolutions, procrastination and budgeting witchcraft. But it provides a window into the bizarre world of the way much of health care financing gets done in Washington — as an afterthought and via backroom negotiations.

“This is a miniature version of what we also have as the inefficiencies of health policy and health care,” said Thomas Miller, a resident fellow at the conservative American Enterprise Institute, a Washington think tank. “We do a lot of things that burn up resources and energy, and we treat them as a big deal, and that tends to keep you down in the trenches, shooting at things in front of you and not looking at the larger picture.”

In their enthusiasm to pass a budget this month, Congress included permanent dissolution of the therapy caps — 277 pages into the bill. The bill contained several other measures meant to placate medical constituencies by fulfilling their financial requests: for instance, forestalling payment cuts to so-called Disproportionate Share Hospitals, which treat higher proportions of low-income patients, and continuing a payment bump to certain rural home health providers.

The therapy cap came as an amendment to the 1997 budget bill, part of a “big push to reform entitlements,” recalled Katherine Hayes, health policy director at the D.C.-based Bipartisan Policy Center, who worked at the time for Rhode Island Republican Sen. John Chafee, then the chair of the Senate subcommittee on health care.

Its inclusion was somewhat arbitrary — “an assignment … to get some savings in the health sector,” recalls Sen. Ben Cardin (D-Md.), who at the time was a junior member of the House Ways and Means Committee, where the proposal originated.

Others recalled some concern that Medicare was paying too much for physical therapy and a hope that limiting coverage might help control these costs. 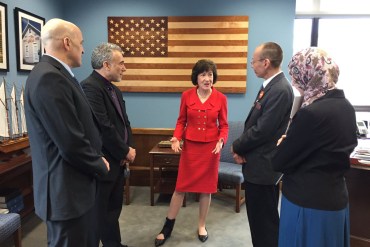 Over the years, Republican Sen. Susan Collins of Maine (center) emerged as one advocate for staving off the Medicare therapy caps. She met with members of the American Physical Therapy Association at one of the group’s advocacy forums last spring. (Courtesy of APTA)

Almost immediately, backlash came from a small but impassioned therapy contingent, willing to devote the bulk of its lobbying resources to this one issue, with effect. Lawmakers on both sides of the aisle balked when it came to actually implementing the caps.

Over the years, that resistance translated into Capitol Hill rallies, starring speakers such as Maine Republican Sen. Susan Collins, who would wear and remove baseball caps — metaphorically “lifting the cap,” Moore recalled. It also meant full-court-press phone-a-thons from the nation’s physical therapy community, calling on Congress to extend the delay, usually by attaching legislative language to whatever must-pass spending bill or health care funding measure was moving through the pipeline.

The therapy lobby kept the legislative patches going, but efforts always stopped short of a full repeal, many recalled. This solution allowed lawmakers to have it both ways: They did not have to take a generous popular benefit, physical therapy, away from voters. But they continue to support a budget amendment aimed at taming runaway spending.

“For a number of years, we thought [the cap] was not a thoughtful approach,” said Cybele Bjorklund, who worked from 1995 to 2015 as a Democratic staffer in Congress. “Many Republicans also realized pretty early on this was not good policy. But again — nobody wanted to then pay to get rid of it.”

And so, sidestepping imposition of the therapy cap was achieved by adding the delay into a hodgepodge of small health initiatives, known as the “extenders,” which are addressed every few years. In 2006, Congress switched from delaying the cap to simply allowing for easy exceptions for patients who needed therapy beyond the stipulated limits.

On the balance sheet for the budget bill that passed this month, the nonpartisan Congressional Budget Office estimated the permanent therapy cap repeal will cost more than $6 billion over the next decade.

A Few Hiccups And, Ultimately, Repeal

The ups and downs of the therapy cap provision kept APTA in business — providing fodder to mobilize their members and resulting in increasing lawmakers’ interest in a permanent deal, Moore said. Political gamesmanship and partisan bickering resulted in brief lapses — in late 2003, for a month in 2006 and in early 2010 — when lawmakers failed to patch together a bill in time.

Meanwhile, the estimated cost of forestalling or mitigating therapy caps grew more expensive each time around.

An effort to incorporate repeal of the caps into the 2010 Affordable Care Act failed, partially, Bjorklund recalled, because Democrats wanted the sweeping health law as a money saver. That meant every penny counted, and even a few billion dollars represented deadweight.

In 2015, a proposed Senate amendment to a larger bill on doctor payments again would have ended the therapy caps. It was ruled out of order after falling two votes short of a motion to waive concerns about its relevance.

That exhaustive 20-year effort laid the groundwork for this month’s deal. When Bjorkland heard that therapy caps could be on the table for this year’s budget bill?

“I remember saying, ‘Please, just get rid of it, will you? Finish it off!’” she said.