Corporate America is taking a hard look at moving retirees and part-time workers into health insurance marketplaces created by the Affordable Care Act, suggests a survey by the National Business Group on Health.

To a lesser extent large companies also expect coverage for their full-time workers and spouses to shift to the online, state-based marketplaces known as exchanges, according to the annual survey published Wednesday. 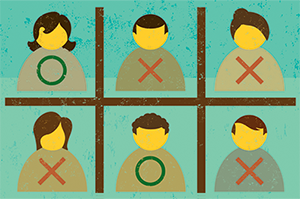 “They see the exchanges as logical places for them,” NBGH President Helen Darling said in an interview, portraying the change as adding diversity and stability to the marketplaces. “These are people that public policymakers wanted to get into the pool.”

The survey was done before the Obama administration delayed until 2015 the requirement that large employers offer coverage to certain workers, the group cautioned, so some plans may have changed.

NBGH, an association of large employers offering what are often substantial medical benefits, polled its membership about their plans for 2014. Of 360 members, 108 responded, most with more than 10,000 employees each. The findings are likely to add to the discussion about whether the Affordable Care Act will erode traditional, employer-based coverage.

NBGH asked whether employers expected various groups “who may currently be covered by your plans will choose public exchange coverage when it becomes available in 2014.”

While 40 percent predicted no change, a fifth of those responding expected part-time workers to buy exchange plans next year. The health law does not require employer coverage for those who work less than 30 hours a week.

A fourth anticipated that retirees too young for Medicare and still on the company plan could choose exchange coverage in 2014.

An even greater percentage — 41 percent — figured former employees on the company plan under COBRA provisions would buy instead in the subsidized online exchanges next year.

The Consolidated Omnibus Budget Reconciliation Act of the 1980s allows workers to maintain company coverage even after they leave their jobs by paying the premiums themselves. Before the health act outlawed discrimination in the individual insurance market against those with preexisting illness (starting next year), ex-employees often relied on COBRA while unemployed.

A smaller but still substantial number of respondents expected active employees and spouses now on company plans to seek exchange coverage next year. Companies contemplating such a move often plan to give employees money now spent on the corporate plan to buy into the marketplaces, analysts say.

Darling downplayed the idea that less generous employer benefits are behind the potential move to exchanges.

“They are not reducing their benefits,” she said at a Wednesday news conference. “The dollars that they are putting into health care are going to go up next year.”

Full-time employees seeking exchange coverage in 2014 are likely to be lower-paid workers in retail and hospitality who don’t take the company plan because they can’t afford it, she said. The ACA marketplaces come with substantial government subsidies for those with family incomes of up to about $94,000.

Fifteen percent of the employers in the NBGH survey saw spouses or other dependents shifting to the online marketplaces next year; 12 percent saw full-time workers making the switch.

Last week Kaiser Health News reported that United Parcel Service would drop about 15,000 working, white-collar spouses from its company plan next year but would continue to cover nonworking spouses.

While large employers are barred from buying on state exchanges at least until 2017, their workers and dependents could buy plans as individuals.

Big corporations are also looking closely at private health insurance exchanges for employees and retirees. Like the public ACA exchanges, private exchanges offer an online menu of comparable policies for consumers to choose from.

Private exchanges are offered only to a limited set of potential members, however — say, employees and retirees at select companies. They also lack the public exchanges’ government subsidies.

About a third of the companies in the NBGH poll are considering moving employees into private exchanges, promoted for their potential to control costs by fostering more choices in the employer-sponsored insurance market.

She expects quicker adoption, however, of private exchanges for retirees.

Nearly half the companies are considering shifting retirees into private exchanges next year or later. Ten percent have already done it.

The idea is gaining traction. So few people had heard of private exchanges that NBGH didn’t include them in last year’s survey. Since then Aon Hewitt and others have announced the creation of private exchanges, sharply raising interest, Darling said.