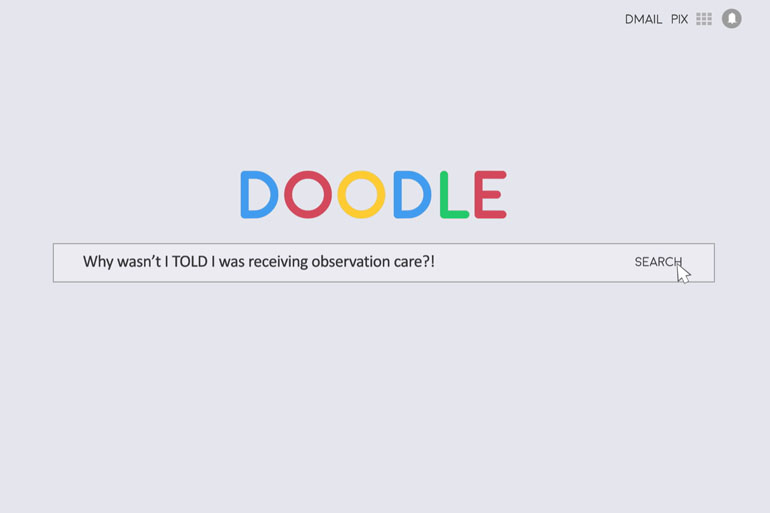 Under a new federal law, hospitals across the country must now alert Medicare patients when they are getting observation care and why they were not admitted — even if they stay in the hospital a few nights. For years, seniors often found out only when they got surprise bills for the services Medicare doesn’t cover for observation patients, including some drugs and expensive nursing home care.

The notice may cushion the shock but probably not settle the issue.

When patients are too sick to go home but not sick enough to be admitted, observation care gives doctors time to figure out what’s wrong. It is considered an outpatient service, like a doctor’s visit. Unless their care falls under a new Medicare bundled-payment category, observation patients pay a share of the cost of each test, treatment or other services.

And if they need nursing home care to recover their strength, Medicare won’t pay for it because that coverage requires a prior hospital admission of at least three consecutive days. Observation time doesn’t count.

“Letting you know would help, that’s for sure,” said Suzanne Mitchell, of Walnut Creek, Calif. When her 94-year-old husband fell and was taken to a hospital last September, she was told he would be admitted. It was only after seven days of hospitalization that she learned he had been an observation patient. He was due to leave the next day and enter a nursing home, which Medicare would not cover. She still doesn’t know why.

“If I had known [he was in observation care], I would have been on it like a tiger because I knew the consequences by then, and I would have done everything I could to insist that they change that outpatient/inpatient,” said Mitchell, a retired respiratory therapist. “I have never, to this day, been able to have anybody give me the written policy the hospital goes by to decide.” Her husband was hospitalized two more times and died in December. His nursing home sent a bill for nearly $7,000 that she has not yet paid.

The notice is — as of last Wednesday — one of the conditions hospitals must meet in order to get paid for treating Medicare beneficiaries, who typically account for about 42 percent of hospital patients. But the most controversial aspect of observation care hasn’t changed.

“The observation care notice is a step in the right direction, but it doesn’t fix the conundrum some people find themselves in when they need nursing home care following an observation stay,” said Stacy Sanders, federal policy director at the Medicare Rights Center, a consumer advocacy group.

Medicare officials have wrestled for years with complaints about observation care from patients, members of Congress, doctors and hospitals. In 2013, officials issued the “two-midnight” rule. With some exceptions, when doctors expect patients to stay in the hospital for more than two midnights, they should be admitted, although doctors can still opt for observation.

But the rule has not reduced observation visits, the Health and Human Services inspector general reported in December. “An increased number of beneficiaries in outpatient stays pay more and have limited access to [nursing home] services than they would as inpatients,” the IG found.

The new notice drafted by Medicare officials must be provided after the patient has received observation care for 24 hours and no later than 36 hours. Although there’s a space for patients or their representatives to sign it “to show you received and understand this notice,” the instructions for providers say signing is optional.

Some hospitals already notify observation patients, either voluntarily or in more than half a dozen states that require it, including California and New York.

Doctors and hospital representatives still have questions about how to fill out the new observation care form, including why the patient has not been admitted. During a conference call Feb. 28, they repeatedly asked Medicare officials if the reason must be a clinical one specific for each patient or a generic explanation, such as the individual did not meet admission criteria. The officials said it must be a specific clinical reason, according to hospital representatives who were on the call.

Atlanta’s Emory University hospital system added a list of reasons to the form that its doctors can check off, “to minimize confusion and improve clarity,” said Michael Ross, medical director of observation medicine and a professor of emergency medicine at Emory. Emory also set up a special help line for patients and their families who want more information, he said.

The form also explains that observation care is covered under Medicare’s Part B benefit, and patients “generally pay a copayment for each outpatient hospital service” and the amounts can vary. But Ross said “this wording may be antiquated.” Medicare revised some billing codes last year to combine several observation services into one category. That means beneficiaries are responsible for one copayment if the observation stay meets certain criteria.

The new payment package also includes coverage for some prescription drugs to treat the emergency condition that brought the observation patient to the hospital, said Debby Rogers, the California Hospital Association’s vice president of clinical performance and transformation. Other drugs for that condition will be billed under Part B with separate copayments, she said.

But patients will have to pay out-of-pocket for any medications the hospital provides for preexisting chronic conditions such as high cholesterol, and then seek some reimbursement from their Medicare Part D drug plans for any covered drugs.

Yet, Ross said, most observation visits are less expensive for beneficiaries than a hospital admission if they stay a short time, which the inspector general’s report also concluded. Doctors should “front load” tests and treatment so that the decision to admit or send the patient home can be made quickly. “If you get them out within a day, they are more likely to go back to independent living as opposed to needing nursing home care,” he said.

Last summer, Judy Ehnert’s 88-year-old mother had a bad fall and broke her wrist. Following surgery, and additional complications, hospital officials told the family she would be kept for observation but she would need to go to a nursing home to recover. When the family learned what observation care meant, said Ehnert, a retired bookkeeper who lives in West Fargo, N.D., “that’s when we blew a cork.”

Then, after a few days in observation, Ehnert’s mother contracted an infection and she was admitted to the hospital. “Her care was totally the same, in the same room, with the same doctor, the same nurse.” And Medicare covered her nursing home care.

“That’s what I expected at her age,” Ehnert said. “I always thought that’s what Medicare was for.”

This story was updated to correct the spelling of Judy Ehnert’s name.

By Law, Hospitals Now Must Tell Medicare Patients When Care Is ‘Observation’ Only