Talking about money is never easy. But when doctors are reluctant to talk about medical costs, a patient’s health can be undermined. A study published in Monday’s Health Affairs explores the dynamics that can trigger that scenario.

Patients are increasingly responsible for shouldering more of their own health costs. In theory, that’s supposed to make them sharper consumers and empower them to trim unnecessary health spending. But previous work has shown it often leads them to skimp on both valuable preventive care and superfluous services alike.

Doctors could play a key role in instead helping patients find appropriate and affordable care by talking to them about their out-of-pocket costs. But, a range of physician behaviors currently stands in the way, according to the study.

“We need to prepare physicians to hold more productive conversations about health care expenses with their patients,” said Peter Ubel, the study’s main author and a physician and behavioral scientist at Duke University.

The researchers analyzed transcripts of almost 2,000 physician-patient conversations regarding breast cancer, rheumatoid arthritis and depression treatment. They identified instances in which patients suggested that the cost of care might be difficult to afford and assessed how doctors responded. 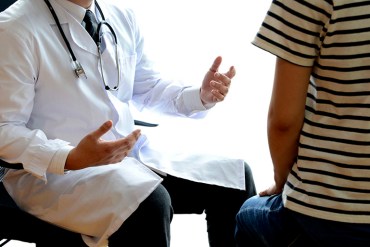 Overall, researchers noted two ways in which doctors dismissed patients’ financial woes. They either did not acknowledge the concerns patients expressed or only half-addressed them. For instance, if a patient commented on how expensive a drug was, the doctor might ignore the comment entirely or might suggest a temporary solution — like a free trial — without exploring long-term strategies to address the issue.

And, without such a long-term plan, patients may eventually stop taking the medication, or take it irregularly. That can harm their health, and even send them to the hospital.

Still, Ubel said, it is clear doctors are not talking to patients about these expenses. He pointed to a separate analysis of those same conversations, which found that doctors discussed medical costs with patients about 30 percent of the time; and, in only about 40 percent of those discussions did doctors and patients brainstorm about ways to make medication more affordable.

Why do physicians hesitate? For one thing, they aren’t used to discussing cost barriers, and many think it’s inappropriate to bring up money at all, Ubel said. When he lectures on the subject, he always encounters people who worry discussing finances will “contaminate the doctor-patient relationship.”

Plus, doctors haven’t been taught to listen for patients’ pocketbook concerns. If a patient comes in with heartburn and indigestion, a good internist will immediately start probing for signs of coronary disease, Ubel said. By contrast, physicians aren’t primed to pick up on cues that patients may face financial strains.

The idea of patients acting as consumers — weighing cost and shopping for the best health care deal — is still relatively new, the study notes. As it becomes more commonplace, patients may push doctors for more help in making cost-based decisions, Ubel said.

That said, navigating a patient’s financial circumstances and medical needs in the course of a 15-minute visit is tricky, said Jonathan Kolstad, an assistant professor of economic analysis and policy at the University of California, Berkeley. Kolstad wasn’t involved in the Health Affairs study but has researched how medical costs affect people’s decision-making.

“It’s not as though, ‘Oh, it’s just consumers can’t figure it out.’ Doctors don’t know,” he said. When it comes to figuring out what a drug will cost, “doctors are in the same boat.”