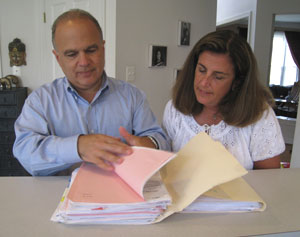 These people have so-called “Cadillac” or “gold-plated” plans. They cover almost everything – and the premiums are very expensive.

Mitch Stabbe has one of these plans. He’s a lawyer in Washington, D.C. Through his firm, he gets a plan that has an annual premium of more than $20,000, which he pays for himself. Stabbe is a partner, and is considered self-employed, so the firm doesn’t contribute to his health coverage.

Stabbe says that when he factors in deductibles and co-payments, the family ends up spending close to $30,000 a year on health care. “That’s a nice chunk of change,” he says. He believes it’s worth it, because otherwise the family would have huge medical costs.

Stabbe’s 18-year-old son Bryan has Crohn’s disease, a chronic illness that attacks the digestive system. Bryan takes a weekly oral medication, and every five to six weeks, gets an infusion of a drug called Remicade. Without insurance, the infusions alone would cost around $40,000 a year.

“In the balance of things, we’re lucky to have [our plan],” Mitch Stabbe says.

Not Just The Wealthy

The Stabbes can afford to pay a lot for their coverage, but there are many people who get gold-plated plans through their jobs and pay very little or nothing for premiums, deductibles or co-pays.

Rusty and Deb Lovell live in Concord, N.H. Rusty had to stop working about a year ago and gets Social Security disability payments. Deb earns a little over $30,000 a year as a secretary at a community college. 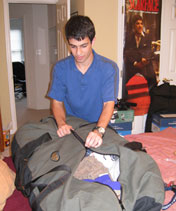 But her job also comes with something almost as valuable as her salary – employee health coverage from the state of New Hampshire.

Deb’s share of the premium cost is $60 a month. Yet when combined with what the state contributes, the total premium for her family coverage ranks in the top 4 percent of premiums in the country.

The plan is negotiated by the state employees union, and Deb says the coverage is “so important to us that we have often negotiated for keeping our insurance and foregone raises year after year.”

For the Lovells, the benefit has been priceless. Eight years ago, Rusty was diagnosed with chronic myelogenous leukemia.

“The first question I asked Deb on our drive home from the oncologist’s office was: ‘what do you do when you’re 47 years old, and told you have five years to live at best?'” recalls Rusty. But after eight years, four chemotherapy treatments, three doses of radiation and one stem-cell transplant, Rusty is still alive. He’s leukemia-free, although a spinal surgery left him mostly confined to a wheelchair.

Difference Between Life And Death?

Last year alone, Rusty’s care cost more than $1 million. Because of their generous health insurance plan, the total cost for the Lovells came to $500 in co-payments. 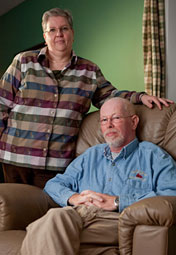 Rusty Lovell, 47, was diagnosed with leukemia eight years ago. He can no longer work, but he is covered by his wife, Deb’s, health care plan. (Matt Teuten)

Deb says that if they had a cost-sharing plan that required them to pay 20 percent of their medical costs, like many plans do, “we would be hundreds of thousands of dollars in debt. And I’m not sure Rusty would even be with us because I’m not sure we would have been able to afford all the fabulous care that he’s had.”

The Lovells have mixed reactions to the current health care debate. Rusty says he knows “there are people out there that have little or no insurance and need something better. On the other side, I don’t want to give up what we’ve got personally for something significantly lesser to try to equalize.”

Lawmakers have discussed paying for part of the health overhaul by taxing expensive health insurance. Deb says the idea worries her. Her salary is not high, and she’s “not sure how much of a tax it could sustain and still have something come home in the paycheck.”

Washington lawyer Mitch Stabbe, on the other hand, says he’s willing to pay higher taxes to get more people covered because “everybody should have some reasonable expectation that their basic medical costs are going to be covered so they can get basic medical treatment. This is a country that can afford it.” But he adds that the government probably cannot afford to give everyone a platinum plan like the one he has.

For Some Families, ‘Cadillac’ Health Insurance Is Priceless