When GOP presidential hopeful Herman Cain comes face-to-face with a crowd of legislators and news reporters Wednesday, the subject will be health care policy, not sexual harassment- – if Rep. Michael Burgess, R-Texas, has his way. 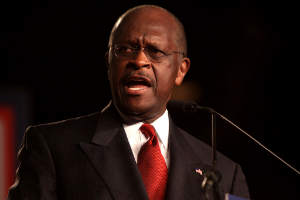 Burgess is bringing Cain to Capitol Hill to flesh out his health care ideas, which so far have been thin:  Mostly he’s called for repeal of the health care law, which he calls health “deform.” Cain will appear for only 30 minutes, and Burgess is expecting a packed room. So Burgess will attempt to make it clear to attendees up front that any reporter intent on peppering Cain with questions about any other subject will have to wait until the event is over, he said in an interview.

Cain this week has been defending himself from allegations that he sexually harassed female employees when he headed the National Restaurant Association.

But even if Cain can fend off harassment-minded reporters, what he says about health care is unlikely to be surprising. While his opponents have hammered his primary competitor, Mitt Romney, as a flip flopper on health care issues, there is no question where Cain stands. His predictable, conservative positions today reflect the same ones he fought for when he ran the restaurant group, and when he led Godfather’s Pizza.

It is summed up in one short video. Cain, in the early 1990’s, criticized President Bill Clinton for his proposal to require most employers to provide insurance to workers or pay a penalty. Cain said that the additional cost would force him to cut back on staff. At the time, Cain provided coverage to one-third of Godfather’s employees, with the company picking up 75 percent of the cost.

Cain advocates cracking down on medical malpractice lawsuits by penalizing those who sue even though they have weak cases. “Loser pay laws would be a great start!” according to his campaign website.

He also wants to loosen restrictions on health savings accounts and extend the same tax breaks now available for the purchase of employer-sponsored health insurance to people who buy policies on their own.

“Patient-centered free market health care reforms have already been developed and introduced in Congress, but they are stuck in committee and they can’t get out,” he says on his campaign website. “With the right leadership we can get them out and get them passed.”

Burgess, a physician who started and runs the Congressional Health Care Caucus, has extended invitations for similar events to most GOP presidential hopefuls, and Ron Paul has accepted for Nov 15. He already has hosted Mississippi Gov. Haley Barbour, before he dropped out of the race, and former House Speaker Newt Gingrich.

Cain On Health Care: What To Expect From Capitol Hill Speech