In the last years of Martin Privot’s life, his family had to start selling his assets to pay for his nursing home costs. “He needed 24-hour care and couldn’t be left alone,” recalls his daughter Toni Footer. “My biggest fear was we would run [through his money] and wouldn’t be able to provide the care that he needed.” 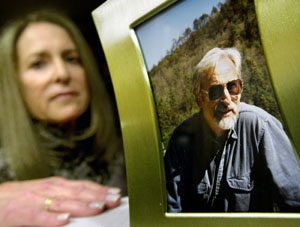 Toni Footer with a photo of her late father, Martin Privot. She says his experience “reinforced my already strong feelings that long-term-care [insurance] is a necessity” (Bill O’Leary/The Washington Post).

Privot died in 2008, from post-surgical complications and other ailments, before all his assets were depleted. Yet Footer, 61, says her dad’s experience “reinforced my already strong feelings that long-term-care [insurance] is a necessity.” The Rockville, Md., resident says she pays about $2,500 every year for such coverage for herself. “It’s expensive — in fact, it’s gone up twice — but it’s worth every penny. It provides a peace of mind that my family won’t have to struggle to find money to pay for my care.”

Mary McClelland came to the opposite conclusion after seeing how her mother’s expenses were often deemed exempt from coverage.

Her mother, Ruth Mezick, purchased long-term-care, or LTC, insurance in 1990 at age 78 when she was in fairly good health, paying an annual premium of $2,827 until she died 11 years later. In her mid-80s, her health began to deteriorate, and she spent time in a nursing home, at home with help and in assisted living. But her policy — which promised to pay $100 a day — failed to cover much of those expenses because it kicked in only after she had been in one institution more than 100 days.

“She was never in one place long enough to qualify. She ended up getting about 10 days’ coverage, worth about $1,000,” says McClelland, who lives in Falls Church, Va. “That was a lesson to me; I decided it doesn’t always pay off.” 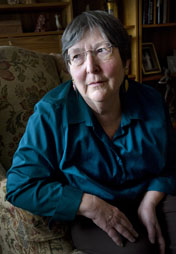 Mary McClelland found that many of her mother’s expenses were not covered by her long-term-care insurance plan (Bill O’Leary/The Washington Post).

The question of whether to get long-term care insurance bedevils consumers and their advisers. Unlike medical insurance, it is intended primarily to cover people who need assistance with so-called activities of daily living — for example, the care of a dementia patient or someone recovering from a broken hip. It can be expensive: Premiums range from $1,000 to $5,000 a year, depending on the age, sex and health of the purchaser as well as the extent of the coverage. And policy details can be confusing.

Even advocates acknowledge that it isn’t for everyone. Jesse Slome, executive director of the American Association for Long-Term Care Insurance, an industry group, sums it up well: “Long-term care is a universal issue facing all Americans who are getting older. But long-term-care insurance is not a universal solution.”

So how great is the need for such coverage? It depends on how you look at the data. “One in two Americans are likely to need long-term-care services sometime in their lives,” says Amy Pahl, a consulting actuary for Milliman Inc., a leading actuarial and consulting company. However, Pahl adds, of those who might need long-term care, about a third will not meet the most common deductible period of 90 days because they will either die or recover before then.

To determine if a long-term-care policy makes sense for you, it is important to understand how the coverage works and what’s available.

Don’t Think Medicare Will Cover You

Most standard health insurance plans do not cover long-term care. Nor does Medicare or insurance policies that supplement Medicare.

Medicaid, however, is the largest source of coverage for long-term care. The program pays for more than two-thirds of nursing home residents, according to data from the Kaiser Family Foundation. (KHN is an editorially independent program of the foundation.)

But Medicaid comes with significant limitations. The choice of facilities that accept Medicaid is narrow, and the program is restricted to people with extremely limited income and virtually no resources, which forces middle-income consumers to spend down their assets if they want to qualify.

“Medicaid is supposed to be a safety net, but unfortunately it rests just about a half-inch off the floor,” says Tom West, a Northern Virginia financial adviser and long-term-care expert.

Yet Kansas Insurance Commissioner Sandy Praeger cautions that long-term care policies may not be a good investment for some people. “It’s mostly a policy to protect your assets [so you don’t have to sell everything to pay for care] in case you get sick. If you don’t have assets to protect, then you shouldn’t be buying it.” But even those with few assets might consider some protection because it will allow them more flexibility than Medicaid if they need to choose a nursing home.

How The Coverage Works

Many policies also allow the initial fixed daily benefit to rise 3 or 5 percent annually to keep up with health-care costs. The policyholder agrees to a premium that can increase only if the change is approved by state regulators. Such increases have occurred frequently in recent years and, as a result, once-flat premiums have risen sharply. So have nursing home costs, which averaged about $214 a day — or more than $78,000 annually — for a semi-private room last year, according to a national survey by the insurer MetLife.

“Long-term care insurance keeps you from being dependent on the government or relatives and it provides liquidity, even for people who have a lot of assets,” says Rockville financial planner Arthur Stein. “You don’t have to rush and sell assets in a down market, like today’s, to cover health costs.”

As people’s needs have changed, long-term care policies have expanded to cover assisted living and home care; some new policies are flexible enough to anticipate technologies that don’t yet exist, such as robotic care.

“The policies have become very innovative,” says Slome. “Today you can go in and design coverage for particular needs and desires; you can even buy long-term-care insurance to enable you to get your care on a cruise line if you want it — and can afford it.”

Today’s policies can also allow couples to share benefits, so a husband and wife can each buy a shorter-term policy, for example three years of benefits. About 70 percent of coverage today is sold to couples, Slome said. If it turns out that the husband needs more than three years’ coverage, he can tap into his wife’s benefit pool. And in some policies, if the husband completely exhausts the couple’s coverage, the wife may still receive some nominal benefits if she needs care, too.

At the end of 2010, about 7 million Americans had long-term care insurance, according to LIMRA, an association of life insurance and financial service companies. About 422,000 new policies were written in 2010. About 56 percent were sold individually, with the rest sold through employer- or association-sponsored sales.

The 2010 health-care law has a provision creating a voluntary, long-term care insurance program. However, in October, the Obama administration announced it would not implement the provision (called the CLASS Act) because it was financially unsustainable.

According to Slome, the average age of the buyer is 57, with three-quarters of the policies written when purchasers are between 45 and 64.

When buying insurance, the younger the consumer, the lower the annual premiums. Today, according to Slome’s association, a 55-year-old couple in generally good health can expect to pay $2,675 a year for $338,000 of benefits; that figure would grow to $800,000 by the time they reach 80 if the policy contained a 3 percent annual compounded escalation clause. If they are 65, however, that same policy would cost $4,660 a year and grow to only $527,000 in coverage when they are 80.

For Washington area residents, even that coverage can be less than needed. The Guide to Retirement Living SourceBook, a comprehensive listing of retirement community, nursing home, assisted living and rehab facilities and home-care options in the area, puts the daily local cost per person of nursing home care at $235 to $304, or nearly $86,000 to $110,000 a year. Daily assisted living costs run between $108 and $162. (The SourceBook is owned by The Washington Post Co.)

One of the key concerns among consumers is the rise of premiums.

“It’s probably the most frequent complaint I hear,” says Praeger, who heads the National Association of Insurance Commissioners’ health and managed care committee. “The problem is, the older policies weren’t priced right to begin with. Companies expected about 8 percent of customers to stop paying their premiums, when, in fact the lapse rate is closer to 2 percent.” That meant the insurers had to cover more beneficiaries than they expected at a time when the economic downturn has meant less return
on their investments.

Praeger acknowledges that rate increase requests have posed a dilemma for insurance commissioners. “If we don’t give them the rate increase they need, the insurance carriers could become financially impaired, and that doesn’t help people,” she says. In fact, in recent years, a number of companies have stopped selling policies. As a result, she adds, it’s hard to turn the increases down.

The policies can be very complicated, and Praeger advises consumers to consult with their accountant, attorney or other trusted financial adviser before purchasing a policy. “It’s important  to understand what you’re buying, what the benefits are. It’s very complicated so work with someone you know and trust if you want to buy a policy.”

Calculating A Long-Term Care Policy: Will It Cover Your Needs, Can You Pay For It And Can You Afford Not To Have It?

Behind the Byline: The Count — And the Toll